The plants listed below are generally reliable and of easy culture, as long as you remember that no succulent plant likes to have prolonged moist soil; the potting mix should allow good drainage. Also, most succulents like quite bright light — they are not shade-loving plants. Those on this list are mostly smaller species that live amongst rocks or under other plants in nature and therefore can tolerate somewhat lower lighting conditions.

There are about 10,000 different types of succulent plants in nature. Hybridizers have given us another thousand or so. Most of the natural species (except for the very most common in cultivation) do not have common names. In most cases, the names appearing below refer to a genus (a group of closely related species) that share similar cultivational requirements. Still, not all species within a genus may be equally easy to grow. There are many other plants not on this list that will be equally good for beginners.

All of these should be considered frost-tender and grown as container plants to be moved indoors during our cold months.

Echinopsis. Mostly small, globular South American cacti, often with large white flowers, but other colors occur. There is a large number of named hybrids with spectacular flowers in a rainbow of colors. If dry, most can take light frost. One subgroup is sometimes treated as the separate genus Lobivia.

Ferocactus. This is a genus of plants commonly called Barrel Cacti, from the southwest United States and Mexico. They have well developed and beautiful spines, often colored red or yellow (such as the Golden Barrel). Many tend to get fairly big, but they grow slowly. Ferocactus generally grow in full direct sunlight so it can be placed outside in the full sun for the summer. They should be kept in the brightest possible location indoors during the cold season, with reduced watering to reduce growth. 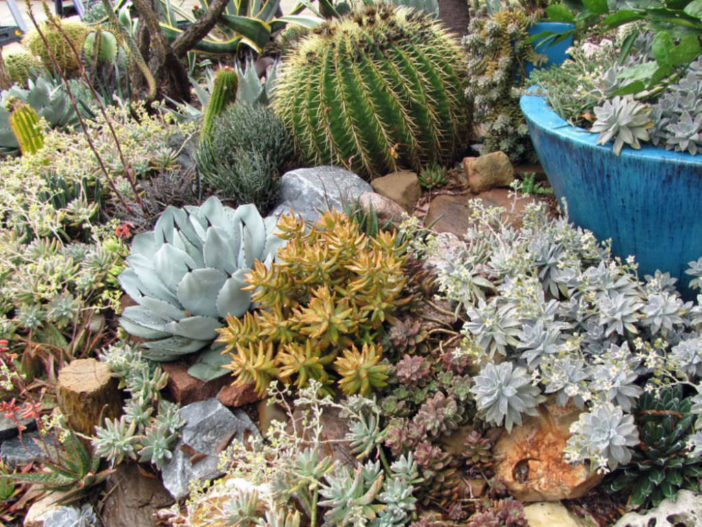 Rhipsalis. This is a very different looking group of true cacti native to the rainforests of the Americas where they live as epiphytes within the forest canopy. They are very slender stemmed, and pendant, making good hanging baskets in areas of lower light. They are very frost tender. Many are totally spineless or nearly so, and the flowers are very tiny and not showy. These make good accent plants for shady patios or hanging from trees during the summer months.

Mammillaria. A large group of popular plants from the American Southwest into southern Mexico. Most are fairly small and quite spiny. Many flowers freely in cultivation. Most cluster in time.

Parodia. Another popular group of smaller species from South America, many with beautiful flowers of various colors. One subgroup is sometimes treated as the separate genus Notocactus.

Rebutia. Yet another very popular group of quite small globular cacti, many of which cluster freely. Many of these will live for several years in a 3-5 inches (8-13 cm) pot. Spination is quite variable – some have soft fuzzy "fur"; others have very tiny spines; others have more typical spines. They originate from the high Andes mountains of Bolivia and Argentina, often living under other vegetation. Flower colors range from white to pink to lilac to deep red, and yellow to deep orange. They should be provided with a cool, dry winter rest to promote the best flowering. One subgroup is sometimes treated as the separate genus Sulcorebutia.

Adenium. This is a small group of leafy stem succulents from Africa and Arabia. They are sometimes called Desert Rose. They have two main appeals: they have very thickened, sculptural appealing succulent stems, and they produce an abundance of flowers that range from pink to bright red, often with contrasting yellow and white stripes or markings. In nature, some grow to the size of small trees, but they can be kept in pots for a very long time; they lend themselves to bonsai culture. Both here in the United States and also in Asia, there has been much hybridization resulting in a fantastic array of flower colors and shapes. They tend to be susceptible to spider mites when grown indoors but can be forced into a state of leafless dormancy by greatly reducing watering while they are indoors in the winter.

Agave. Sometimes called Century Plants, these are native to the American Southwest, Mexico, and the Caribbean. They are rosette-forming plants, and the leaves are often armored with spines along the edges and at the tip. Many form giant plants many feet across, but others can stay nicely in a 5-10 inches (12-20 cm) pot for many years. They are mostly grown for the decorative plant architecture (leaf color and spination). It takes many years for them to bloom (though not a century!), and when they bloom, the plant dies. Many popular forms have variegated leaves with linear stripes of white or yellow. They prefer full sun in the summer and a bright location when indoors.

Aloe. Another genus of rosette-forming succulents these from Africa and Arabia. There are hundreds of species, ranging in size from huge trees to tiny dwarfs that will live happily for years in 3-5 inches (8-13 cm) pots. They are a very popular subject for hybridizers who have developed wonderfully colored, patterned, and toothed foliage. Most all of the smaller species also bloom easily, with stalked clusters of tubular flowers mostly red, pink, orange, or yellow.

Crassula. A large genus of African succulents that includes the popular Jade Plant. Many species are very tiny dwarfs, but these prefer very bright conditions to maintain their attractive, compact form and interesting leaf colors.

Echeveria. This is a popular group of Mexican succulents. The leaves are colorful and sometimes with unusual shapes and many flowers successfully under our conditions. In low light, they can become rather floppy and lose their interesting coloration. 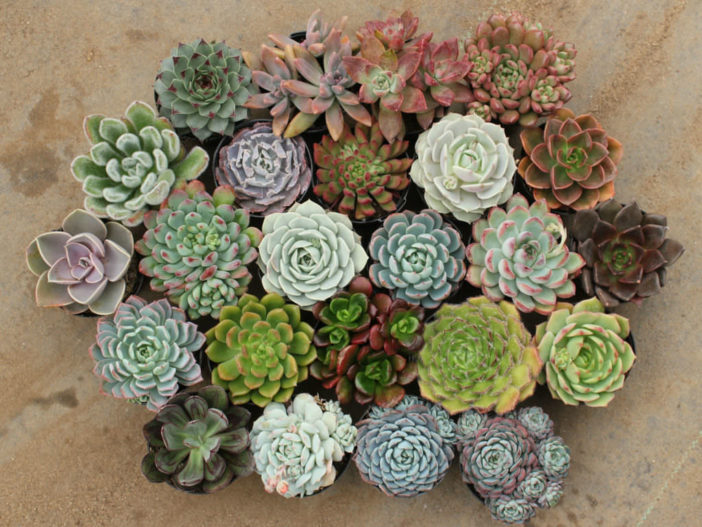 Euphorbia. This is a huge genus of plants that includes our common garden spurges. A few of the succulent species occur in the New World, but most commonly come from the Old World, primarily Africa. They vary greatly in body form, and many look amazingly like true cacti. Others look more shrubby, and some are quite leafy, such as the common "Crown of Thorns" (Euphorbia milii), which comes from Madagascar.

Gasteria. This is a small genus from South Africa related to Aloe and has been used as a parent in hybridization between the two genera. All the plants stay small and lend themselves to container culture. They also tend to tolerate lower light conditions. They flower readily with spikes of pinkish flowers.

Haworthia. Another South African genus related to Aloe, and with many forms. Unfortunately, the taxonomy of the genus is very difficult, and in some cases, the same plants can be found under numerous names. They all stay as quite small rosettes; most cluster, but some do not. Some of the smaller ones can live for years in a 3 inches (8 cm) pot. Those that have numerous slender leaves do very well with our short dreary days of winter. Still, the more compact types with relatively few highly succulent leaves tend to stretch a bit in winter and therefore, should be kept quite dry to reduce this tendency. Many have very nice leaf markings and interesting color patterns that come out best when in full sun. Most flowers easily, though the flowers, which are borne on thin elongate stalks, are rather small, white, and amazingly similar between species. This is a very popular group.

Hoya. These are mostly hanging or vining species originating from southern Asia, through the islands of the Pacific southward to New Guinea and Australia. Hoya carnosa is often referred to as the wax vine as the flowers, which occur in a large cluster, appear sculpted from wax. This species has several named cultivars, the very twisted Hindu rope being one. As forest species that can handle lower light conditions, and some are popular houseplants.

Portulacaria. This is a small genus, mostly from southern Africa. One species, Portulacaria afra, is very commonly cultivated. It somewhat appears like a smaller Jade Plant, but with thinner stems and smaller leaves. It branches profusely and can be pruned and shaped into a bonsai appearance. There is also a form with variegated leaves.

Sansevieria. These plants originate from Africa to southern Asia. Many are grown as houseplants, such as the very common Sansevieria trifasciata, which can be seen in most shopping malls and doctors' offices throughout the country. This species and other thin-leafed species can tolerate low light and much neglect. There are other, more interesting, and highly succulent species that require higher light levels. The send out spikes of white, often pleasantly-fragranced flowers.

Zamioculcas. There is only one species in this genus, with the catchy name of Zamioculcas zamiifolia (therefore sometimes called the ZZ plant). From an underground tuber, it produces quite large compound leaves with thick succulent leaf midribs and numerous dark green glossy leaflets. It can tolerate low light conditions and significant neglect though the leaves will wither and die if kept without water too long. It is from Kenya southward in eastern Africa. Even though succulent, it looks a bit more like a tropical houseplant.

In addition to the genera discussed above, there are two other groups that are worthy of mention. These are larger groups, with multiple genera, but which can be considered somewhat together.

"Mesembs". These are members of the plant family Aizoaceae (subfamily Mesembryanthemaceae). This is a very large family (2000 species), and all are succulent. Most are from southern Africa. They all have highly succulent leaves, but they range in form from dense woody shrubs to tiny, highly succulent clumps. They all produce colorful flowers that resemble small daisies. One of the most popular genera is Lithops; these plants are sometimes called "Split Rocks" as the single pair of highly succulent leaves looks like a round pebble broken in half. Other popular genera of dwarf, highly succulent species include Aloinopsis (including Nananthus), Argyroderma, Cheiridopsis, Conophytum, Dinteranthus, Fenestraria ("Baby Toes"), Pleiospilos, and Titanopsis. The species vary in their reliability under cultivation. All are highly succulent and prone to rot if overwatered. Some are winter growers and therefore lose their compact form under the low light conditions of our winters. If you are interested in this group, give them as much light as possible year-round and be very careful with watering. And then assume that you will occasionally lose one anyway!

"Stapeliads". These plants belong to the Milkweed family. In the dry areas of the Old World, this group of plants has evolved to be highly succulent. Virtually all are leafless. The stems are thick and fleshy and photosynthetic and come in a variety of colors, shapes, and armature. Some species get quite large, but many will happily stay in 3-5 inches (8-13 cm) pots for years. The attraction of this group is the star-shaped flowers that range in size from under a half-inch to over 8 inches (20 cm) across. The flowers are very fleshy and come in a variety of colors from yellow to purple and usually have interesting markings. Many are pollinated by flies attracted to the fragrance of these flowers, which can be of the potency of a decaying buffalo (hence the name "Carrion Flower" given to some species). Some of the more commonly cultivated genera include Caralluma, Huernia, Orbea, Orbeopsis, Piaranthus, Stapelia, and Stapeliopsis, but there are many others equally interesting. Stapelia gigantea (named for the large flowers) is probably the most widely grown species in the group and can be found happily growing and flowering in bright windowsills throughout the world. These should all be given good light throughout the year and watered carefully, or they may succumb to rot. Stem segments root easily, and it is wise always to have a couple of new ones coming along…just in case. They are also highly susceptible to mealybugs.