You are at:Home »Cultivation »Homemade Potting Soil for Succulent Plants

Succulents require well-draining soil that allows roots to grow and air to circulate. Without these qualities, succulents are prone to rot, which often results in the death of the plant. Although commercial potting soils for succulents are readily available, making your own ensures the quality of the mixture and provides flexibility for experimentation. Depending on the size of the batch, combine ingredients in a large bowl, bucket, bushel basket, or clean garbage can.

An adequate potting soil for succulents consists of two parts soil or soil substitute. A soil-free commercial potting mixture is recommended for homemade potting soil because the soilless mix is lightweight, porous, free of weeds, and pre-sterilized to remove disease and bacteria often found in garden soil. High-quality garden topsoil is appropriate if it is sterilized before mixing it with other ingredients. To sterilize garden soil, preheat an oven to 200 degrees Fahrenheit (93 degrees Celsius). Spread the soil in a baking pan and heat it for 20 minutes. Stirring the soil every five minutes heats it evenly and prevents scorching.

Potting soil for succulents benefits from the inclusion of two parts peat moss. Peat moss is too acidic to be used as a potting mixture on its own, but when incorporated into the soil and other ingredients, it promotes moisture retention and nutrient absorption while providing ample air circulation around growing roots.

Peat moss isn't a problem as long as you are careful of how much water you give your plants. Potting soil with peat moss tends to retain too much water to keep succulents healthy and thriving. 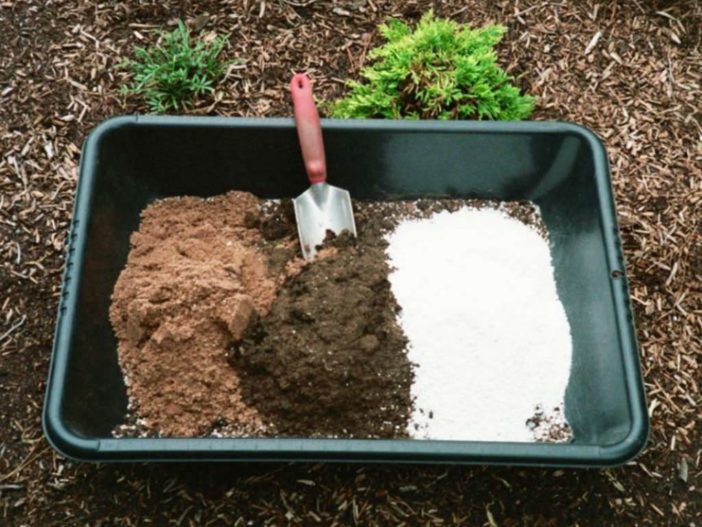 A ratio of one part clean sand provides a gritty, coarse texture to a potting soil mixture that enhances the air circulation and moisture drainage required by succulent plants. Sand is also beneficial because it anchors succulents and prevents them from becoming dislodged in a loose, lightweight potting mixture. A coarse builder's sand is preferable because beach and sandbox sands are too finely textured and dense.

Incorporate one part perlite into the potting mixture to add air space. Perlite, inexpensive and easily located in most garden centers, is a granular, white, puffy volcanic rock that improves drainage and prevents compaction of the potting mixture. Vermiculite, also a volcanic byproduct, is a suitable substitute for perlite but is often more expensive. Alternatively, use crushed charcoal in place of perlite or vermiculite.

A small amount of limestone, rich in calcium and magnesium, balances soil pH and makes soil nutrients more available to the succulents. Similarly, bonemeal supplies phosphate, which stimulates root growth. Use approximately 2 ounces of limestone and 2 ounces (57 gr) of bonemeal for every 4 gallons (15 l) of the potting mixture.