You are at:Home»Cultivation»General Care»How to Grow and Care for Stapeliads

The genera of plants within the tribe Stapeliae are all to varying degrees stem succulents. Many of the species resemble cacti, though they are not closely related, as an example of convergent evolution. The stems are often angular, mostly four-angled in cross-section, but in some species, there are six or more, with some species of Hoodia having more than thirty angles. In size, they vary from less than 1 inch (2.5 cm) in length to over 6 inches (15 cm) tall. The leaves are in most species reduced to rudiments, sometimes hardened and thorn-like, arranged on bumps or tubercles on the angles. Some species, however, still have recognizable leaves, most notably the Indian species Frerea indica, and some members of Tridentea.

Stapeliads are most abundant in warm, dry climates. In Africa, there are two separate regions where Stapeliads have the most diversified: northeast Africa, and Southern Africa. Several species are endemic to the small island of Socotra off the Horn of Africa. The Arabian Peninsula, and most specifically the country of Yemen, contain another concentration of species. Several more are found in the drier parts of Pakistan, Afghanistan, India, Nepal, and Myanmar. A single species, Caralluma europea is found in Europe, in the very southern part of the Iberian peninsula.

Most Stapeliads use flies as pollinators, that are attracted to odors resembling dung or rotting meat, emanating from the flowers. Many of the flowers also bear some physical resemblance to rotting animal carcasses, leading to their popular name of Carrion Flowers. However, not all Stapeliads smell bad, or attract flies. Some species use beetles, bees, wasps, butterflies or moths as pollinators. Stapeliad flowers range in size from mere millimeters in species of Echidnopsis and Pseudolithos to those of Stapelia gigantea that can reach 16 inches (40 cm) in diameter, and are some the largest of flowers to be found on any species of succulent. 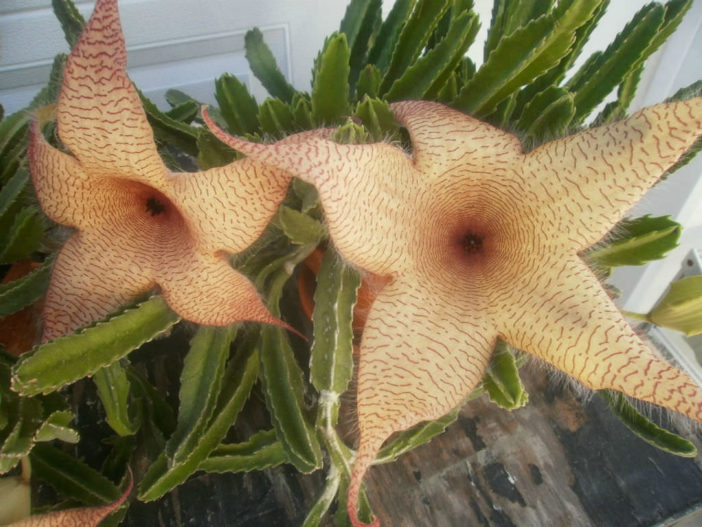 Light: All Stapeliads enjoy dry heat and sunlight, if not too bright and intense.
Temperature: Stapeliads do not like winter cold and should remain fairly dry and warm during its winter resting period.
Water: In the growing season, water in moderation when needed, making sure soil is fairly dried out between waterings. Do not water between November 1 and March 1.
Soil: They all need extra good drainage. Stapeliads are shallow-rooted and a collection of them can be planted up nicely in a wide, shallow bowl. When planting, it is a good idea to allow the roots to be buried in soil and then put pure gravel or sand around the base of the plant to prevent rot.
Fertilizer: Fertilize lightly, if at all, to prevent overly lush and weak stems.

The easiest and best way to propagate Stapeliads is from stem cuttings which can be taken virtually throughout the year. Propagation by seed is also used for these succulents.

Stapeliads are relatively easy to grow. They should be treated as an outdoor plant as they will easily rot indoors and cannot flower without exposure to outdoor temperature fluctuations. They should be grown under cover so that watering can be controlled. They require a reasonable amount of sunlight to promote flowering and maintain a well-shaped plant. Very shady positions will produce very poor flowering. Stapeliads come from climates where they survive extremely high temperatures in the summer months so most growth is in spring and autumn, with flowering in autumn when the weather starts to cool down.