Tridentea is a genus of succulent plant in family Asclepiadaceae, endemic to southern Africa. Tridentea was first described as a genus in 1812, and its name refers to the three "teeth" on each interstaminal segment of its flower ("tri", meaning "three" and "dentis", meaning "teeth"). It was subsequently split, and the genus Tromotriche was created for the 10 species which were separated. 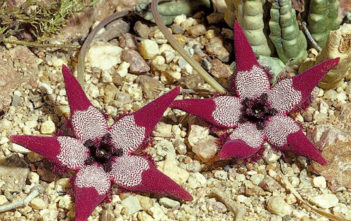 Tridentea longipes is a clump-forming, stem succulent up to 4 inches (10 cm) tall. The erect stems are short, glabrous, 4-angled, dull… 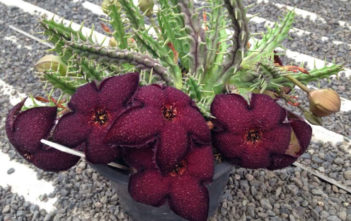 Tridentea gemmiflora (Black Carrion Flower) is a clump-forming succulent with four-angled stems that grow up to 3.2 inches (8 cm) tall. There are long…