String Succulents seem to be growing more and more in popularity. They are prized among many succulent collectors and home decorators alike for its beautiful delicate form.

What are String Succulents? Exactly what the name implies, their growth habit forms creeping strings or chains. All String Succulents display several similar characteristics, such as pendant stems and fleshy green leaves. They make excellent specimens for indoor and outdoor hanging displays, and they are also useful in vertical gardens and wall pockets.

String Succulents are generally alike when it comes to their care. However, they differ in appearance, stem and leaf development, form, texture, color, size, and blooms. Some have an upright body, whereas others have pendant stems. The stems are formed either by multiplying rows of leaves or forming a vine.

These plants do not require much maintenance, and besides this, they are beautiful as decoration. Here are the ten most popular String Succulents to start or add to your collection.

1. Curio rowleyanus, commonly known as String of Pearls or String of Beads 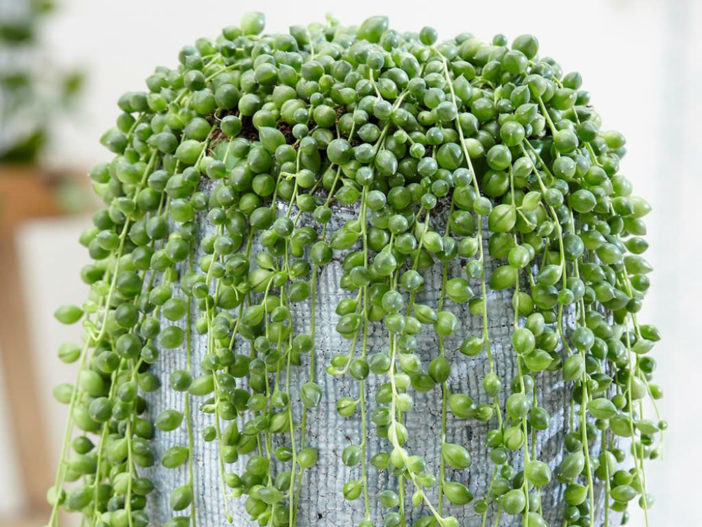 Curio rowleyanus, formerly known as Senecio rowleyanus, is a beautiful trailing succulent native to the drier parts of southwest Africa. It receives its common name from specialized leaves, which are the size and shape of small peas. The flowers are small, white to nearly white, brush-like, and appear during the summer. 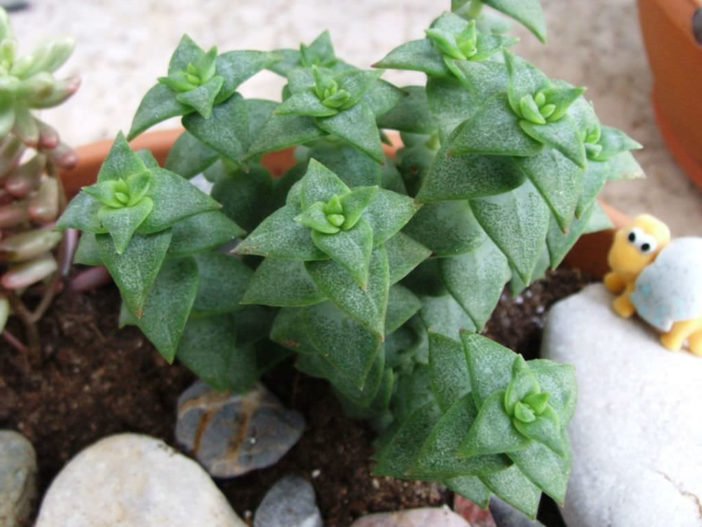 Crassula perforata is a relatively fast-growing, somewhat shrubby, and sprawling succulent native to the Cape Provinces and KwaZulu-Natal in South Africa. Erect first, and the fleshy stems become prostrate and woody over time. Leaves are triangular and grey-green with reddish margins. The small flowers are star-shaped, white to pale yellow, and appear in spring.

3. Curio radicans, commonly known as String of Bananas or String of Fishhooks 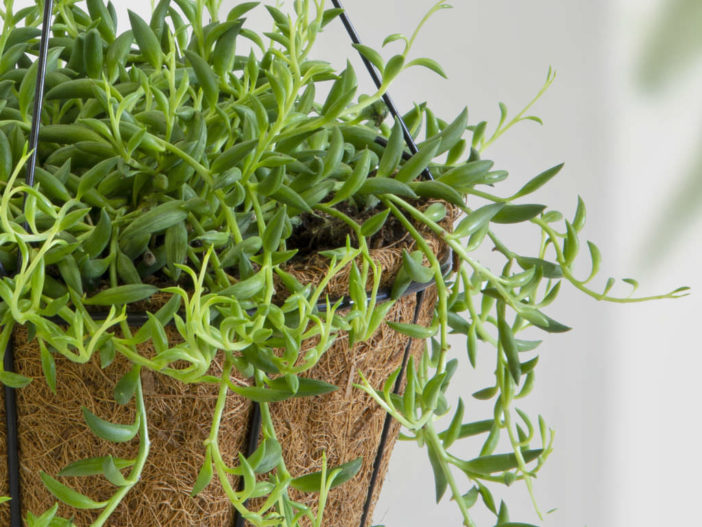 Curio radicans, formerly know as Senecio radicans, is a fast-growing succulent with multiple tendrils of glossy, banana-shaped foliage. It is native to South Africa. Flowers are small, white, cinnamon-scented, and usually appear in late winter or early spring. It is relatively hardy and easy to grow, making it a great starting point for novice gardeners. 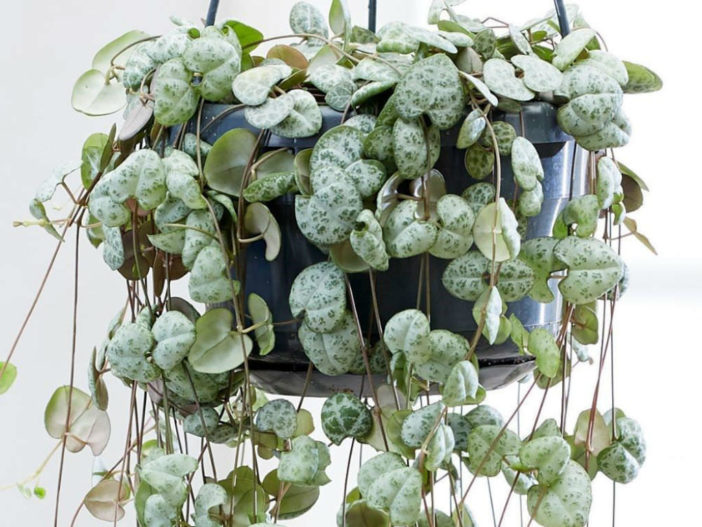 Ceropegia linearis subsp. woodii, also known as Ceropegia woodii, an evergreen tuberous succulent with long trailing stems bearing small, heart-shaped, and grey-patterned leaves. When exposed to sufficient light, they have a deep green color. Under insufficient lighting, the leaves are pale green. Flowers usually appear in late summer to early fall and last up to 6 weeks.

5. Curio herreanus, commonly known as String of Watermelons or String of Beads 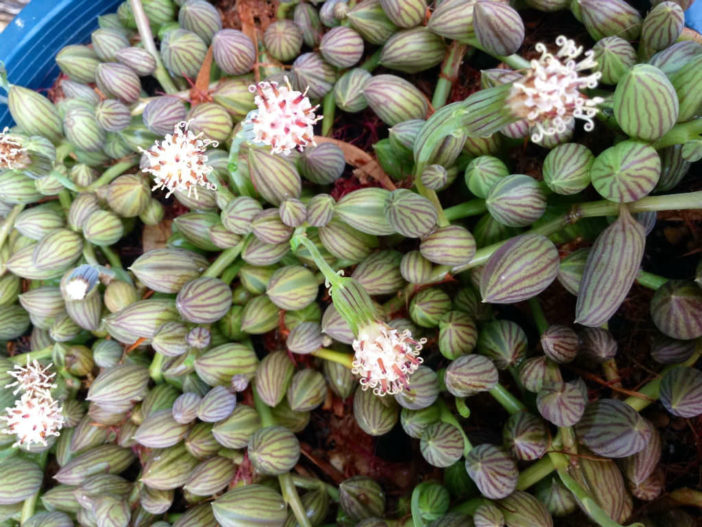 Curio herreanus, formerly known as Senecio herreanus or Senecio herreianus, is a stunning trailing succulent native to Namibia and South Africa. It has trailing stems with oval, pointed, bead-like leaves. They are lined with fine purple stripes and translucent "leaf windows" that help the plant absorb more sunlight. Flowers are small, white to nearly white, brush-like, and appear from spring to fall on long peduncles. 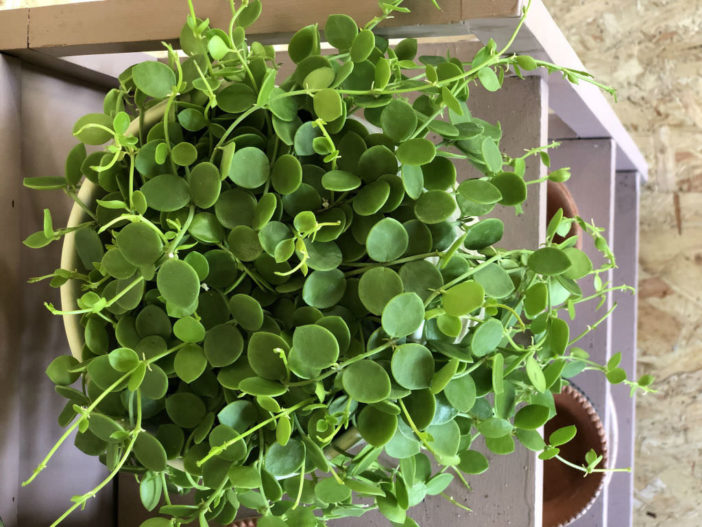 Dischidia nummularia is an epiphytic climbing plant with tiny, opposite, round leaves that resemble small coins dangling on a cord. It is native to tropical regions of Asia and Australia. Young leaves are occasionally with a powdery bloom. Flowers are white to yellowish-white and typically appear in the spring. 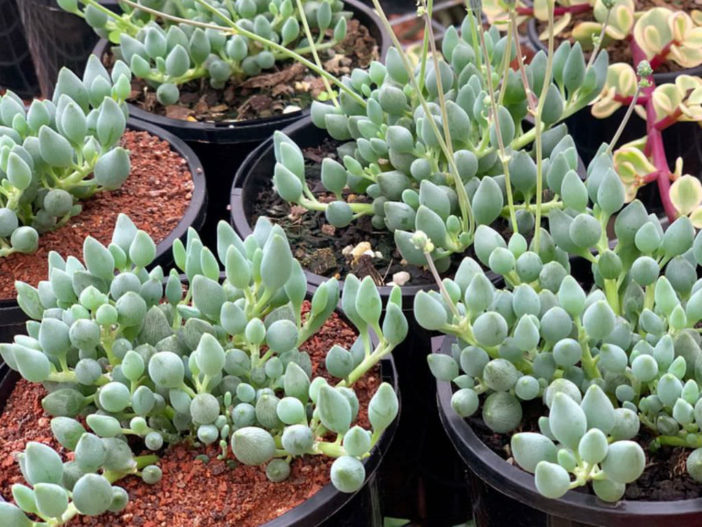 Curio citriformis, formerly known as Senecio citriformis, is a unique, slow-growing succulent with erect and trailing stems and teardrop-shaped leaves. It is native to South Africa, Lesotho, and Swaziland. Leaves are soft, green to deep green depending on the season, with transparent, longitudinal stripes. Flowers are small, creamy-yellow, and appear in late summer to winter on thin, wiry stalks. 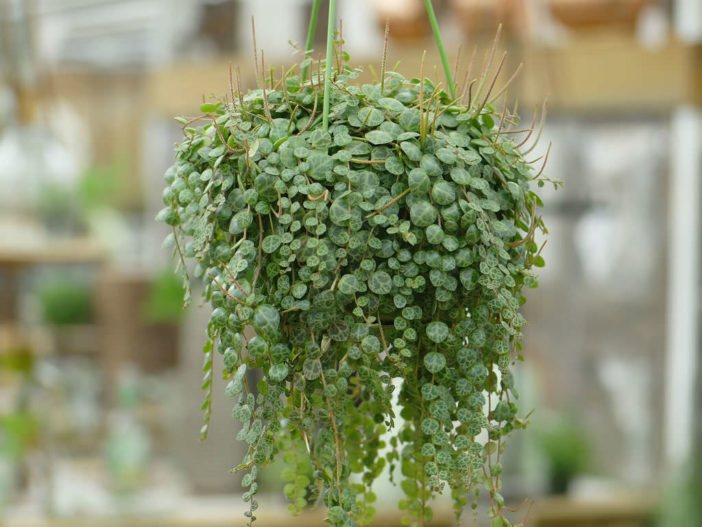 Peperomia prostrata is a small, slow-growing vining plant native to the rainforest of Brazil. Its small size and delicate leaves make it an excellent plant for container gardens and terrariums. Leaves are dark green to purple with a beautiful pattern of white veins. Flowers are insignificant, cream-colored flowers on long spikes. 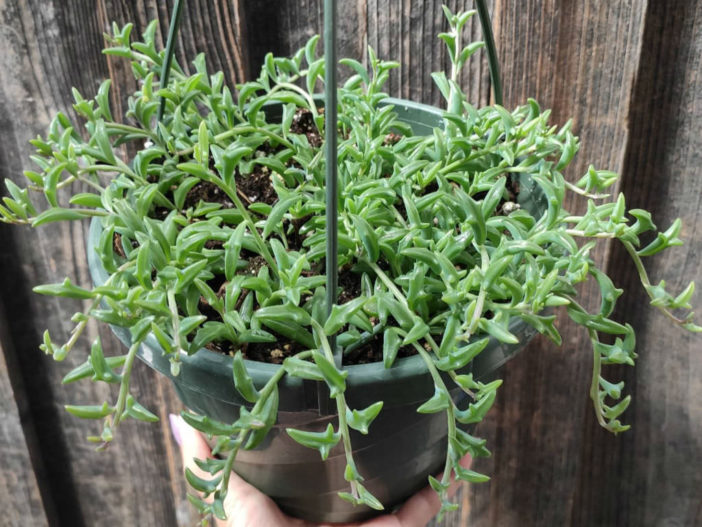 Curio peregrinus, formerly known as Senecio peregrinus, is a rare succulent with leaves that look like tiny, little dolphins jumping out of the waves. As they grow, they are becoming more and more similar, perfecting themselves as an impressive potted plant. In the fall, watch for small white blossoms that smell like cinnamon. This succulent is a hybrid between Curio articulatus and Curio rowleyanus. 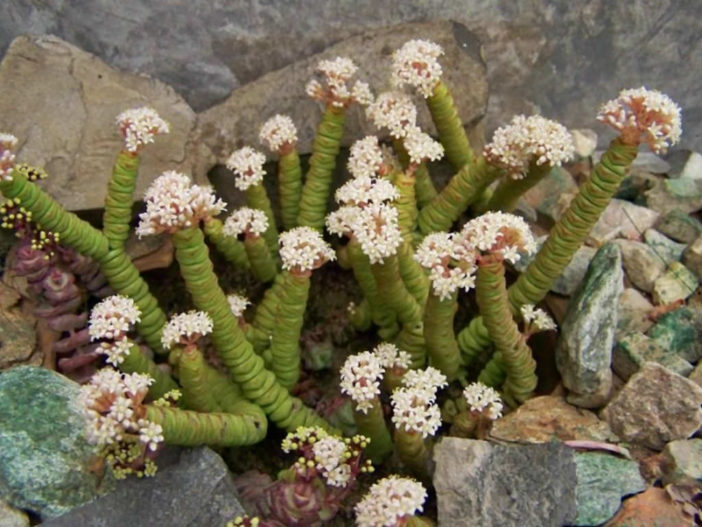 Crassula rupestris subsp. marnieriana, also known as Crassula marnierana, is a small, slow-growing succulent native to the southern regions of Africa. Leaves are green with red edges, thick, rounded, and tightly stacked along the stem. The small, star-shaped, and pink-tinged flowers are grouped in clusters.