Lophophora is a genus of spineless, button-like cacti native to the southwestern United States (Texas and New Mexico) through Northeast Mexico and South to Querétaro in central Mexico.

The species are extremely slow-growing, sometimes taking up to thirty years to reach flowering age (at the size of a golf ball, excluding the root) in the wild. Cultivated specimens grow considerably faster, usually taking between three to ten years to reach from seedling to mature flowering adult. The slow rate of reproduction and over-harvesting by collectors render the species under threat in the wild.

Lophophora species easily adapt to cultivation. Although a cactus, most of the range this genus is found, is within a subtropical climate for some years. In habitat, plants in this genus are subject to seasonal monsoons within their range. The plants live in areas where they may be underwater for several weeks during heavy rains and can tolerate a lot of water when the temperatures are above 100 °F (38 °C). These plants are heat-adapted and grow rapidly when exposed to 110 to 120 °F (43 to 49 °C) and watered heavily in the summer. In habitat, plants from areas that experience seasonal monsoons and high temperatures, such as southern Texas, can reach flowering size in five years. During the fall and winter months, the plants receive almost no water in habitat and are subjected to temperatures which can drop somewhat below 20 °F (−7 °C) during the winter. The plants should not be watered during the winter rest or watered sparingly when they begin to shrink and wrinkle only enough to keep them turgid. Lophophora plants must be kept completely dry if they are subjected to temperatures below 40 °F (4 °C) as watering plants and subjecting them to below freezing temperatures will typically result in the plant's death. 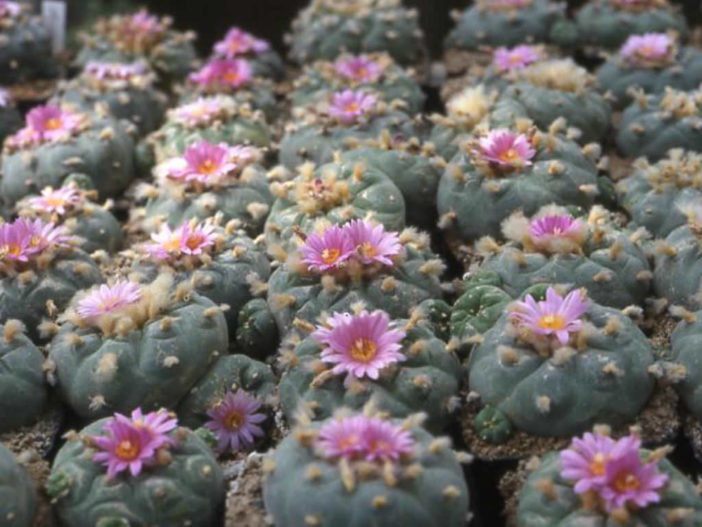 Lophophoras are closely related to the genera Ariocarpus, Aztekium, and Obregonia. Like its relatives, it possesses a large taproot system with most of the plant's mass underground for water storage. Lophophora is more tolerant of soil types than its relatives and typically grows in areas with decomposed limestone present in the soil. In cultivation, Lophophora does best in a fast-draining mineral-based soil, which is about two-thirds sand. Abundant water is beneficial in the summer months when the temperatures are over 90 °F (32 °C) and exposed to full sunlight for maximum growth, but must be allowed to dry out completely between waterings. They should also be fertilized twice a year. Over-fertilizing will typically result in the Lophophora developing cracks and splitting. At times, some Lophophora varieties will develop a corky material on the plant body if exposed to pesticides or insecticidal soap. This corky condition will usually heal in a manner very similar to human skin if the plants are exposed to full sunlight.

Lophophoras are free flowering in cultivation, and although they can withstand low temperatures during winter, they do not require a cold shocking to initiate flowering. Plants in habitat typically flower after rainstorms, preceded by a period of high temperatures and dry conditions. Plants in cultivation can be encouraged to flower by subjecting the plants to high temperatures, direct sunlight, and withholding water for several weeks, then watering heavily, usually initiating flowering.

Seedlings grow most rapidly when enclosed in a sealed terrarium environment, germinated in trays of shallow sand covered with plastic wrap with several small pin-sized holes in the plastic wrapping. This may seem strange for a cactus, but Lophophora seedlings are adapted to germinate and grow during the seasonal monsoons. Plants grown this way can reach a diameter of 2 inches (5 cm) in just over a year and can be removed from their hyper-humid environment approximately two months after germination. They will typically reach flowering size in only under three years via this method.

The contents of this article are for educational and gardening information purposes only.