Cotyledon is a genus of 10 species of perennial shrubby leaf and stem succulents with numerous varieties and cultivars. Mostly from Southern Africa, they also occur throughout the drier parts of Africa as far north as the Arabian peninsula. Cotyledon has been a catch-all genus including species from Echeveria, Rosularia, Tylecodon and Umbilicus, now all grouped separately. Tölken (1978) separated 47 species of Tylecodon with seasonal, spirally-arranged leaves from Cotyledon with perennial leaves. The name Tylecodon is an angram of Cotyledon.

Members of the genus are shrublets, generally succulent, with fleshily woody, brittle stems and persistent succulent leaves. The leaves are opposite. Leaf pairs generally are oriented at 90 degrees to their preceding and following pairs, as is common in the family Crassulaceae, but the leaf habit differs. They are varied in appearance but all have tubular flowers with curled tips that are typically coloured orange or coral pink. They flower mostly in summer.

Cotyledons generally colonise rocky ground and cliff faces, a clue that they appreciate well-drained conditions in cultivation. The fleshy leaves of some species (C. ladismithiensis) are slightly pubescent or farinose (C. orbiculata). The orange flowers of Adromischus phillipsiae are similar to those of Cotyledon, with which it was once grouped. These plants should be regarded as poisonous as the closely related Tylecodons. 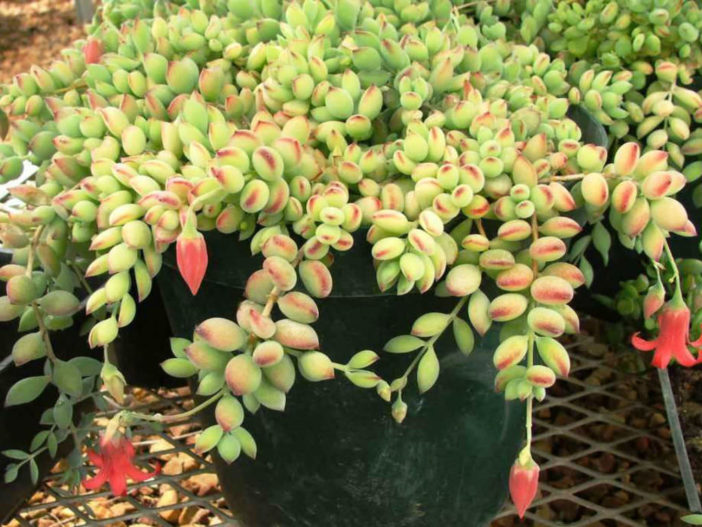 Cotyledons can be divided into two groups. One group consists of evergreen plants with a summer growing period. The other group is made up of deciduous plants, splendidly magnificent with large, solid fleshy stems like. The second group grows during the winter, and sheds its leaves during the summer.

Cotyledons require a free-draining gritty mix and plenty of sun. They are tolerant of cool, frost-free conditions during the winter if kept dry. Some require pruning to maintain an attractive shape.

Cotyledons should be kept in a sunny position. Follow general succulent watering procedures. Be careful of over-watering when Cotyledons are deciduous.

As succulents go, Cotyledons certainly are rewarding garden and indoor subjects, practically independent of irrigation in all but full desert conditions, though they cannot survive poor light or bad drainage in the wet.

Feed it once or twice during the growing season with a fertilizer specifically formulated for cactus and succulents (poor in nitrogen), including all micro nutrients and trace elements diluted to ½ the strength recommended on the label.

Though not spectacular, they are elegantly decorative and often interesting in shape. The inflorescences of the larger species often make fine components of dried arrangements in floral design.

Their main enemies are sucking bugs.