Cacti and succulents are relatively pest-free plants, but, like many others, they occasionally fall prey to typical greenhouse pests like mealybug, scale, mites, and whitefly. Do not worry. Plants and pests go hand-in-hand. You will constantly be bringing pests home with new plants, and no matter what you do, you will never be completely free of them. The goal is to control. Thankfully there are some simple, relatively toxin-free ways to help deal with the little nasties.

Probably the most common pest of cacti and succulents is the mealybug. There are several kinds of mealybugs, but the greenhouse, citrus, and occasionally long-tailed versions are the ones you will encounter most often. They look like tiny, white sow-bugs and have the annoying habit of finding the most out-of-the-way spots on your plants. White, cottony masses are signs that they are reproducing. These are the "nests" that their little crawlers (nearly invisible) call home.

These buggers sap the strength of an infested plant and, with time and exploding numbers, can cause visible (though not usually fatal) decline.

Thankfully they are among the easiest of pests to control. Lug your plant to the nearest sink or hose and give the plant a good, strong shower. Mealybugs can be blasted off their hosts with a forceful stream of water. Another painless way to clean a plant up is with a cotton swab dipped in rubbing alcohol (isopropyl). Simply wipe off any that you see and then rinse the plant with clear water before returning to its spot. A couple of drops of dishwashing liquid to a quart of water is another weapon in the arsenal. The soap acts as a wetter, breaking down the waxy outer coating of many soft-bodied insects, including mealybugs. Biological controls like predatory ladybugs and lacewings are also effective, but take some time to get their game on.

See signs of decline in your succulents for no apparent reason? Dump them out of their pots and check the roots. There is a mealy that makes its home underground and feeds on the roots of our plants. They are the worst, as they are often not noticed until the plant has suffered. Off to the sink, it went and got thorough spraying until no insects or evidence of them was left.

You do not usually notice mites until they have disfigured your plant. They are attracted to warmth and dry conditions, the same environment enjoyed by cacti and succulents. They are tougher to control than some of the other pests. Plants that are otherwise stressed are particularly susceptible.

Mites are not really insects, but they are sucking monsters. On other plants, it is common to find fine webbing, but not always on cacti and succulents. More commonly, you will notice brown, corky patches beginning to show up on formerly healthy plants.

Start your control by keeping a close eye on your plants—scout for trouble. Keep them healthy and properly watered. Step two: bump your humidity up a bit and mist the plants once in a while (most will experience fog in their native haunts. It will not harm them). If you suspect an infestation of spider mites, use the "spray them off" technique discussed under mealybug.

It only seems fair that another of their ilk, a predatory mite, is one of the biological controls. It is a perverse little twist of Mother Nature's.

After mealybug, the scale is probably the most commonly encountered pest of cacti and succulents. These insects are like little armored tanks that clamp themselves to a leaf's surface and do their damage while hidden underneath a relatively impervious shell. 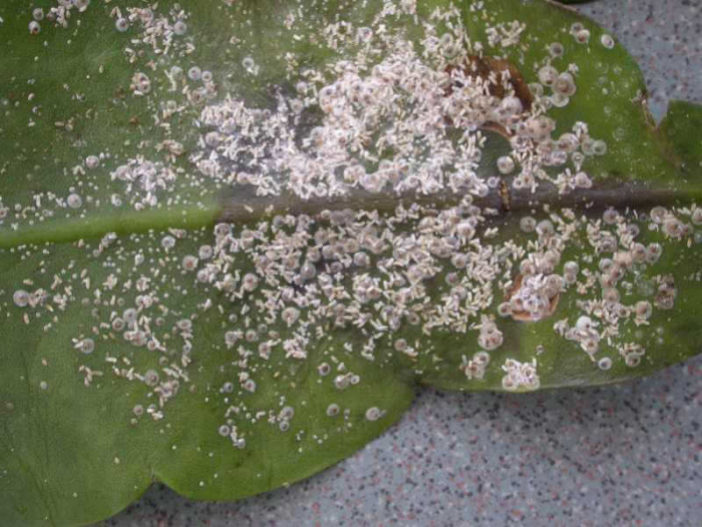 Not as easy to spray off. Use the rubbing-alcohol treatment to remove the scale by hand. A cotton swab or a small, stiff paintbrush will do the trick. They are very difficult to get a good handle on, and it is always best to spot an infestation early. There are predator insects available, but they are most effective if you can identify the scale species you are dealing with.

Whitefly rounds out the list of important pests to be on guard against. They are, as their name implies, small whiteflies. While not common on most succulents, they seem to have a taste for Euphorbias, particularly the ones that have soft leaves.

Parasitic wasps are the most enjoyable way to control these pests. Insecticidal soap sprays can be effective. People have been known to shake their plants and vacuum the insects out of the air. As a short term help to remove adults, it may have some benefit.