Fockea is a genus of 6 succulent scrubs native to southern Africa. It was established by Endlicher in 1838 for the single species, Fockea capensis, based on a specimen cultivated at the Schönbrunn Garden at Schönbrunn Palace in Vienna, Austria. This famous plant had been collected by the explorers sent by Emperor Joseph II of Austria in the Cape Colony sometime after 1786. It is apparently still living today, perhaps the world's oldest potted plant.

Fockeas have large tuberous roots. In their native regions, the tubers and sometimes other parts of the plant are eaten. The tuber consists of spongy tissue capable of collecting water during the rainy season for the plant to use during the dry season. Some specimens have been found weighing around 100 pounds (45 kg).

Young Fockeas usually grow in the shade of companion plants. As Fockeas mature, they send up erect, straggling, or twining aerial stems that sometimes become so dense they strangle the support plant to death. At other times, when rain is scarce, Fockeas are hardly noticeable in the field, as they usually drop their leaves and branches, leaving the remaining plant underground. 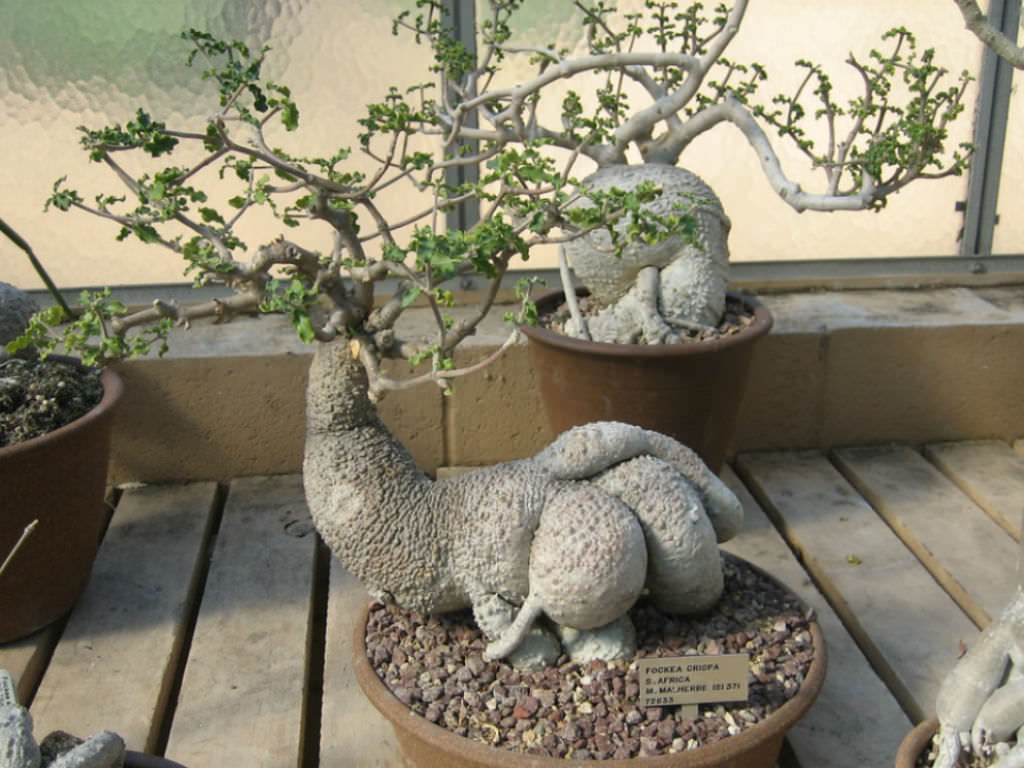 The leaves are simple, opposite, and vary in size and shape between species. Some have entire margins, while others have strongly undulated or crisped margins. Leaves are also variable in many extended populations. Flowers are typically bisexual, greenish-white, and nearly inconspicuous.

Fockeas are easy to grow plants, perfect choice for beginners interested in caudiciform plants. They can be grown in the ground, but Fockeas are usually seen as attractive potted plants.

These plants prefer partial shade. They can tolerate full sun but need a little sun protection during the hottest part of the day.

Fast-draining soil mix is the best soil for your Fockea to drain excess water.

Choose a container that has drainage holes and a depth deep enough to accommodate the rich root system of the plant. For a spectacular tuber, grow your Fockea in a large pot for several years before raising it.

Fockeas are easy to care for because they can store water in their tuber and survive many months without water in hot, arid regions. Provide a trellis, place the plant below a bush, or allow it to vine along a wall or similar structure.

During the growing season, from spring to fall, water regularly allowing the soil to dry between waterings. A shriveled tuber is a good indicator that your Fockea may be underwatered. Reduce watering in the winter. Water only enough to prevent the shriveling of the tuber.

To force tuber growth, feed with high-nitrogen fertilizer with a lower potassium level, only during the growing season.

To encourage tuber development, Fockeas should be repotted once a year. The best time to repot is just after the beginning of the growing season, in late winter or early spring. Always wait a week after repotting to water. The growth of the tuber to a showable size is faster if it is buried in the soil, which can be partly removed for showing.

To keep Fockeas looking their best, occasional pruning is recommended. The plants grow easily after pruning.

Fockeas are relatively easy to grow from seeds. They are dioecious, so both male and female plants are needed to produce seeds. Sow the seeds in a well-drained mix at about 70 °F (21 °C). The growth of seedlings is rapid but is helped by frequent repotting. Do not underpot young seedlings, as they will slow down their growth. As a general rule, the roots should only take up the top half of the pot after repotting.

Vegetative propagation is difficult to impossible.

Pests and Diseases of Fockea

The foliage attracts whitefly, and periodic spraying with an insecticide may be required to control this problem. Fockeas are also attractive to mealybugs, and the aphid occasionally feeds on young stems.

Tubers do not seem especially susceptible to rotting but can collapse suddenly.