This species is native to Mexico and the southern United States.

Agave americana is a popular succulent that forms large attractive stemless or short-stemmed rosettes of grey-green to blue-green leaves with a waxy bloom, sharp marginal spines, and tipped with a dark brown spine. The rosettes grow up to 6 feet (1.8 m) tall and 10 feet (3 m) in diameter. Leaves are up to 6.6 feet (2 m) long and 10 inches (25 cm) wide. Despite its common name "Century Plant," the rosettes typically live between 10 and 30 years. Near the end of its life, the rosette sends up a stout flowering stalk branched near the top and up to 30 feet (9 m) tall. Flowers are yellow or greenish-yellow, up to 4 inches (10 cm) long, and occur in panicles at the branch ends. Rosettes die after flowering but produce offsets around the base, often forming a colony of new plants. Fruits are oblong capsules with a pointed tip, up to 3.2 inches (8 cm) long, turning from green to brown as they mature.

The specific epithet "americana (a-mer-ih-KAY-na)" means "American" and refers to the place where the species was first discovered. It is a compound of two words, "America" and the feminine form of the Latin suffix "-anus." 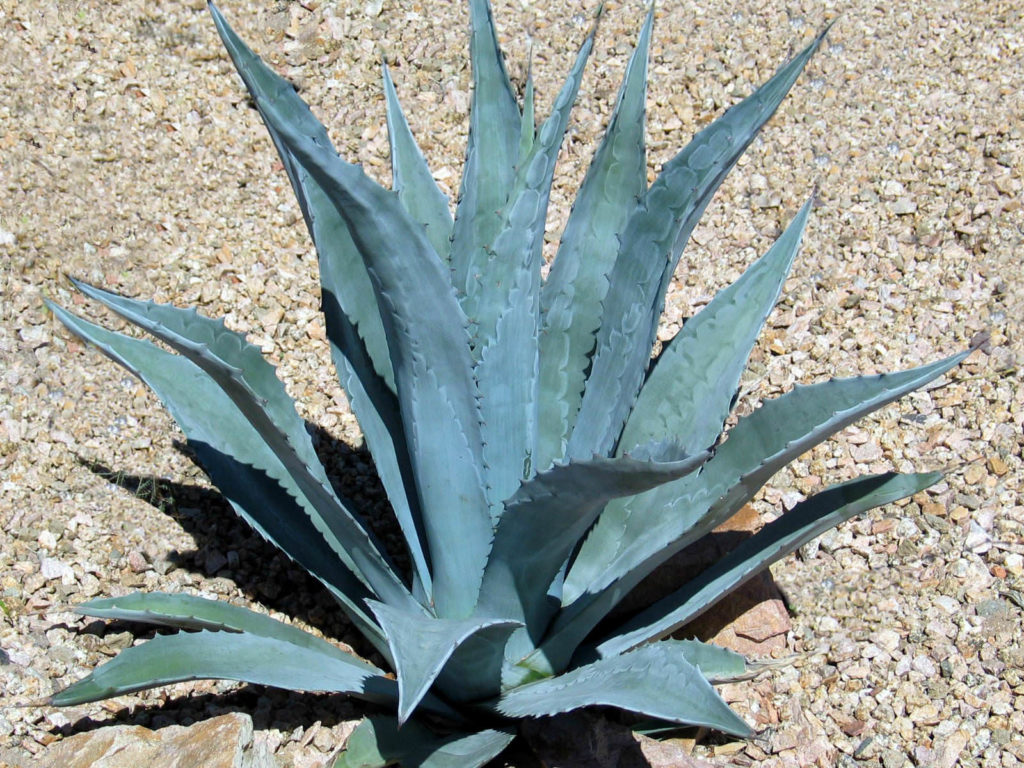 How to Grow and Care for Agave americana

Light: Like all Agaves, this plant requires full sun to partial shade. If growing A. americana indoors, choose a bright, sunny window with as much sun as possible. From spring to fall, it loves going outside.

Soil: A. americana will tolerate most soils as long as they have good drainage, but its preference is sandy or rocky soil.

Hardiness: During the growing season, it likes warm temperatures, while in winter, when resting, this succulent enjoys cooler temperatures. A. americana can withstand temperatures as low as 10 to 50 °F (-12.2 to 10 °C), USDA hardiness zones 8a to 11b.

Watering: From spring to fall, water thoroughly when the soil becomes dry. In winter, water sparingly about once a month. Plants in containers require more frequent watering than those in the ground.

Fertilizing: Give your A. americana a small amount of fertilizer in the spring during the first two years. Established plants seem to take care of themselves.

Repotting: If you notice your A. americana becoming pot-bound, repot it with fresh soil in a new pot that is just slightly larger than the old one. Give the plant a week or so to readjust before you water it again.

Propagation: Since it can take years to produce seeds, A. americana is usually propagated by offsets. The best time to remove the offsets is in spring and summer. Sow the seeds in spring.

A. americana is not toxic to humans, but it may be mildly poisonous to children and pets.

The juice of the plant has antiseptic, wound-healing, and anti-inflammatory properties. It has long been used in Central America to treat burns, bruises, minor cuts, injuries, and skin irritation caused by insect bites. The flower stalks and the base leaves can be roasted and consumed. A. americana is also a source of food. The flower stalks and the leaves can be cooked and consumed. In addition, a sweet juice tapped from the flower stalks can be drunk or used to make an alcoholic beverage such as pulque.

Learn more at Century Plant: Benefits, Uses, and Side Effects.