Agave is a genus of about 270 recognized species of succulent plants in the family Asparagaceae. They are native to the arid and semiarid regions of the Americas, mainly Mexico and the Caribbean.

Agaves are popular as ornamental plants, as well as sources of food, beverage, medicine, and fiber. The leaves, stalks, flowers, and sap all are edible. One of the most commonly grown species is Agave americana, also known as Century Plant. The common name refers to the long time that plant takes to flower.

All Agaves are characterized by succulent or leathery leaves that form rosettes from just 6 inches (15 cm) to more than 20 feet (6.1 m) in diameter. The leaves vary in size, shape, texture, and colors. Leaf margins are usually lined with teeth and tipped with a hard, sharp spine. A few species have leathery, unarmed leaves. When the plant matures, a tall, branched, or unbranched stalk grows out from the center of the rosette and produces a large number of long-lasting flowers. In some species, the inflorescences can reach more than 33 feet (10 m) in height. Flowers are shortly tubular, in shades of white, yellow, and green, and produce capsule fruits.

Most species are monocarpic. After the development of fruit, the rosette dies. However, throughout the lifetime, most of the Agaves produce rhizomatous suckers that grow into new plants. A few Agave species are polycarpic and can flower several times during their life. 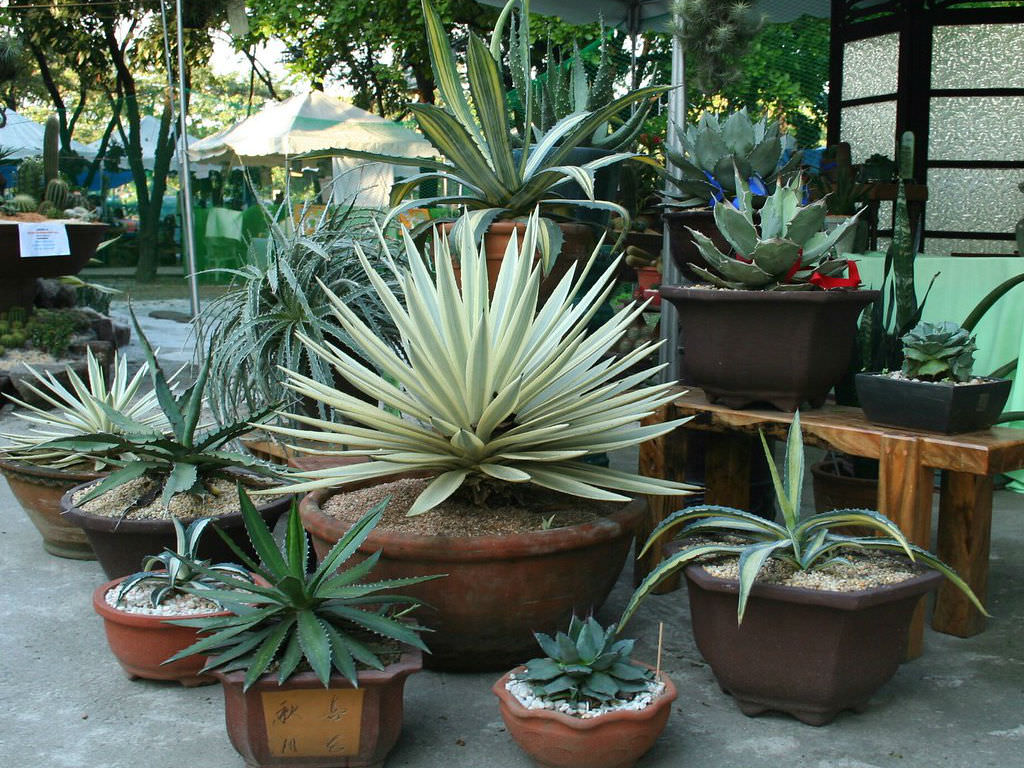 Agaves grow best in hot, dry climates, but they can also be grown in colder climates in pots if given winter protection.

These plants require full sun to partial shade. If you are growing Agaves indoors, choose a bright, sunny window with as much sun as possible. Plants that are grown in low-light conditions become etiolated. Agave plants love going outside from spring to fall. Too much direct sunlight, when plants are not acclimated, can cause sunburn.

Agaves will tolerate most soils as long as they have good drainage, but their preference is sandy or rocky soil.

You can grow Agaves in any size container because they are shallow-rooted and do not need much soil. Be sure that your container has at least one drain hole.

Most Agaves are easy to grow and take little care once established.

Mature plants are very drought tolerant. From spring to fall, water thoroughly your Agave when the soil becomes dry. In winter, water sparingly about once a month. Overwatering may encourage fungal root rot. When you are first establishing an Agave plant outdoors, water once or twice a week.

Plants in containers require more frequent watering than those in the ground.

Give your Agaves a small amount of fertilizer in the spring during the first two years. Established plants seem to take care of themselves. Since feeding may encourage Agaves to bloom, it may lead to premature death.

When the pot becomes full of roots, it has become pot-bound. If you notice your Agave becoming pot-bound, repot it with fresh soil in a new pot that is just slightly larger than the old one. Give the plant a week or so to readjust before you water it again. Repotting Agave can be tricky because of the sharp spikes and spines. Always wear gloves when you repot an Agave as the sap could burn.

Typically, Agave plants do not need pruning unless they have any dead or diseased leaves.

The leaves are quite strong. To prune them, use strong shears, a long sharp knife, or a curved pruning saw that are sharp to minimize any tearing and injury to yourself.

When pruning an Agave, always wear heavy gloves, pants, long-sleeved shirts, and safety glasses to protect your skin and eyes from the leaf teeth, sharp spines, and contact with the sap.

How to Propagate Agave

Since it can take years to produce seeds, Agaves are usually propagated by offsets.

Agaves are easy to propagate by removing the offsets that develop around the base of an established plant. Some Agaves also produce small offsets on the flower stalks. Separate the offsets from the mother plant and remove all broken or damaged roots with a sharp knife. Remove only offsets that have developed in a plant with several leaves. Allow the offsets to dry for one week and plant them in a pot with a well-draining soil mix. Water when the soil is dry. Roots will typically appear in two to three weeks.

Agave seeds are black, flat, and vary in size. The germination will be better if they are fresh. Sow the seeds in spring in a container with well-draining soil. Place the planting container in a warm place with bright, indirect sunlight and keep the soil moist until germination, which usually takes two to three weeks. The seedlings can be transplanted to individual pots when they have two or three leaves.

Pests and Diseases of Agave

Snout weevils are the most common pests of Agave. If your plants have snout weevils, the only solution is to remove the plants and throw them away.

Mealybugs and scale insects attach to the leaves and suck the juices out of them. You can remove these insects with a cotton ball dipped in some isopropyl rubbing alcohol.

Agaves can be susceptible to bacterial and fungal rots if exposed to too much moisture and humidity. Yellowing and shriveled leaves that are easy to break off is a sure sign of root rot. Use an antifungal agent occasionally to prevent infection. Remove already infected plants to prevent spread.

Although these plants have been used as food for centuries, some Agave species contain toxic compounds that can cause mouth, throat, or skin irritation. They are mildly toxic to cats and dogs.