10 of the Most Unique Cacti

The world of plants is often one of strange beauty and pure wonder. Coming in many shapes and sizes, plants are all unique somehow, yet cacti are some of the most amazing plants in the world. Protected by an outer layer of spines, cacti endure the harshest and most demanding environments. Relying on their incredible water storage abilities and thick skin to prevent water loss, they are hidden deep in the driest deserts and even up on the peaks of some mountains. While cacti are unique amongst other plants, some are bizarre, even for cacti standards. 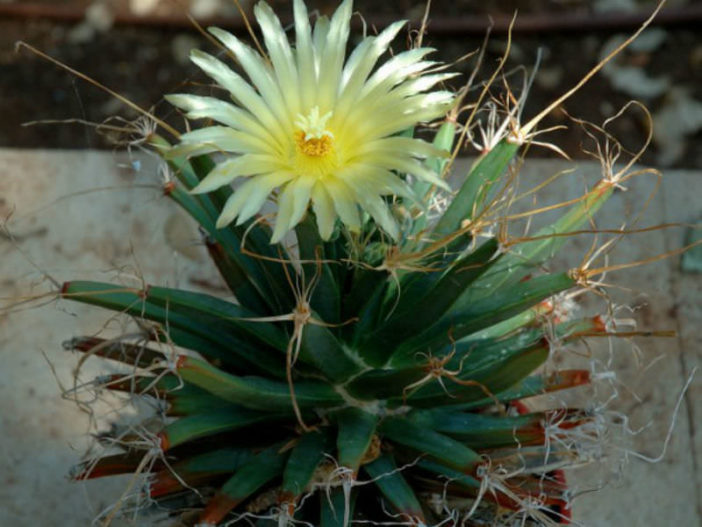 Known as Agave Cactus, Leuchtenbergia principis is unique because of the straight finger-like protrusions from its main stem. These "fingers" are tipped with small clusters of spines that in older specimens can grow into a tangled, protective web on the top portion of the plant. Agave Cactus starts as any normal cactus seedling and soon develops its points. As it ages, these form into its thick photosynthetic "fingers." Once the protrusions have formed, Agave Cactus maintains its shape and gets wider and sturdier but remains a single plant. This is abnormal because most cacti will either start to produce offspring at some point or even "arms" in taller species. 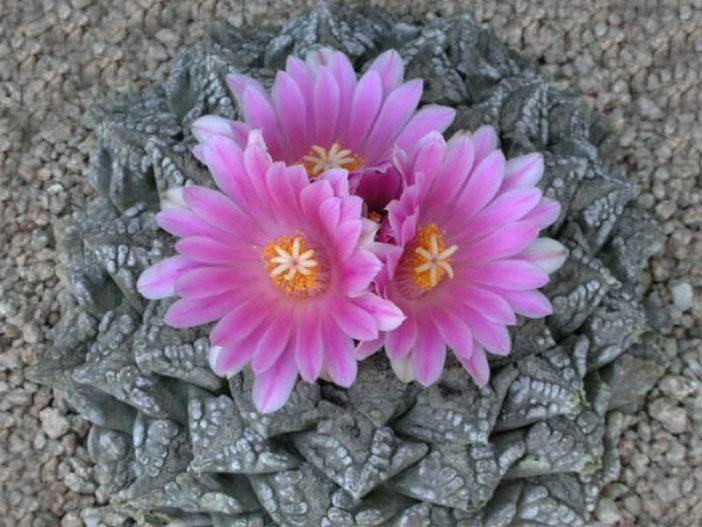 Cacti are associated with spines, yet a few species have no spines or lose them once they reach adulthood. Ariocarpus fissuratus is an extremely slow-growing example of spineless cacti. Some can take up to 50 years to reach 4 to 5 inches (10 to 12.5 cm) in diameter. As a seedling, these plants have tiny, weak spines that grow from the points of their geophytic structure. As the plant ages, these spines fall off, and no new ones grow to replace the original set. This results in a strange-looking plant with no defense, which seems counter-intuitive to the health of the species. Due to its lack of defense, A. fissuratus grows in hard-to-reach crevasses and similar locations and produces small amounts of psychoactive substances to prevent animals from eating it. 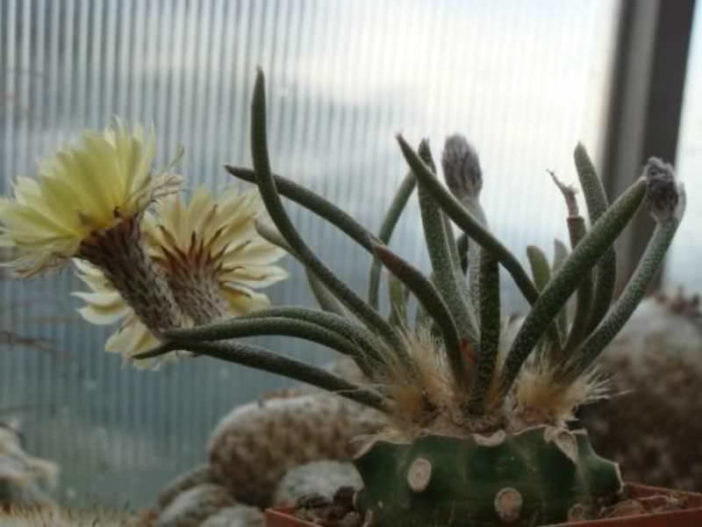 One of a kind in form, Astrophytum caput-medusae grows as its name implies, like the snake hair of medusa. It was first put into its classification until it was discovered that its flowers were identical to those of the Astrophytum genus, as well as its small tufts of soft wool-like hairs from its stem. This secured its place as an Astrophytum species. Producing brilliant yellow flowers with red centers, A. caput-medusae readily produces some of the largest seeds among cacti. 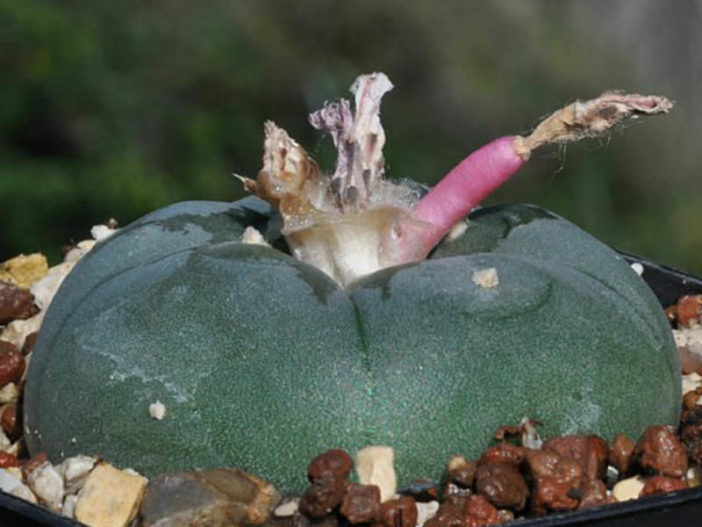 One of the most well-known and well-regulated cacti is Lophophora williamsii, commonly known as Peyote. Illegal to grow or own, Peyote is known for its powerful psychedelic effects, thanks to high mescaline concentrations. It is only legal for use by members of Native American tribes because Peyote has long been a central aspect of Native American rituals. According to these tribes, using Peyote would often result in understanding spirits and other intangible entities. 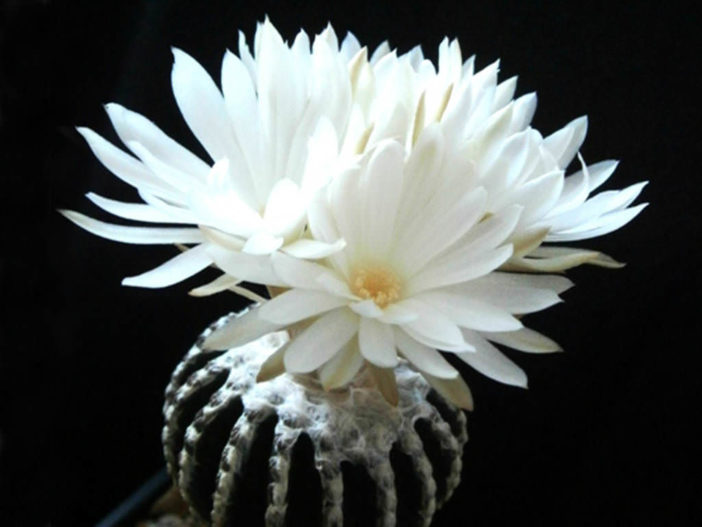 When mature, Discocactus horstii develops a cephalium, a densely spiked growth, from which its large white flowers appear. While it is green in the early stages of its life, Discocactus eventually develops a red tint. However, it looks like a standard desert cactus while young. These cacti grow at elevations of around 1,000 feet (304 m) above sea level. Discocactus can be difficult to grow since they tend to rot if overwatered and dry out completely if left without water for shorter periods than most cacti can endure. 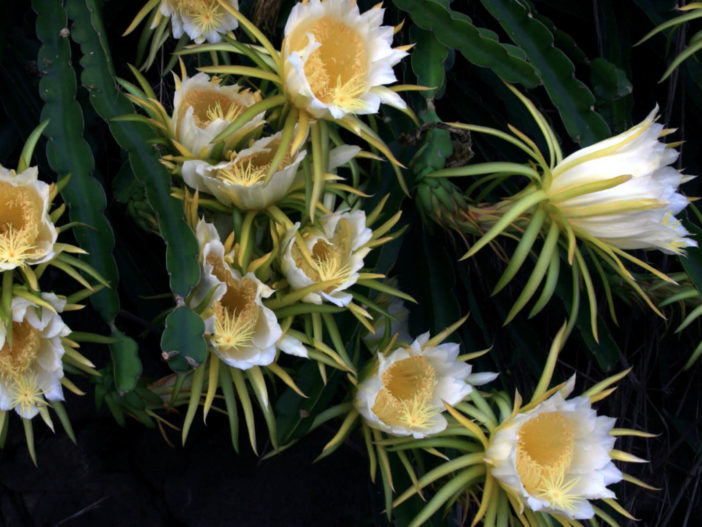 When someone brings up flowers, cacti do not immediately spring to mind, even though cacti flowers can be enormous and beautiful. Hylocereus undatus flower can exceed 14 inches (35 cm) in length and 9 inches (22.5 cm) in diameter. H. undatus blooms only at night, and each flower opens only once before seeding and becoming a dragon fruit or falling off and dying. The flowers give off an extremely potent vanilla fragrance that can be overwhelming if the flower is smelled directly. 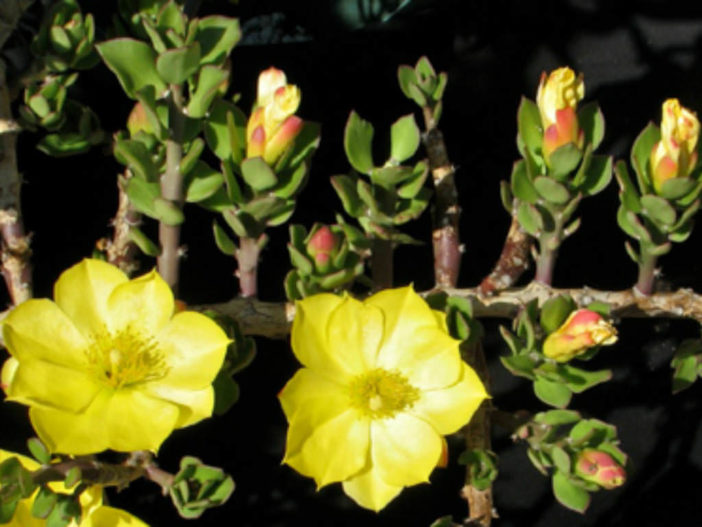 Some cacti are in a primitive enough state that they have both leaves and spines. Pereskiopsis diguetii is one of these, with small spines, glochids, and leaves sprouting from a single point. Tropical and extremely fast-growing by nature, P. diguetii is often used as a grafting base to speed the growth process of seedlings of slow-growing species. While still capable of flowering, it is rare to find a P. diguetii grown for its appearance or flowers. Instead, most specimens are simply cuttings rooted from a mother plant, resulting in numerous clones that can also be cut and replanted. 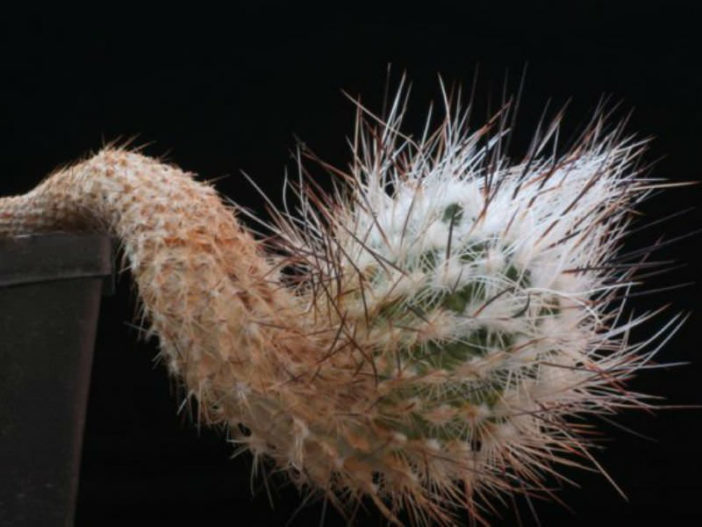 When thinking of cacti, we often think of tall, thick-stemmed plants coated in spikes, but this is often not the case. With the Turbinicarpus subterraneus, the true surprise is below the soil's surface. The small, club-like heads are supported by a tuberous root, often the same size as the exposed stems. This root allows T. subterraneus to survive long periods of drought by storing large quantities of water. Being below the surface also allows it to be cold resistant enough to endure short periods of exposure to temperatures as low as 25 °F (-4 °C). 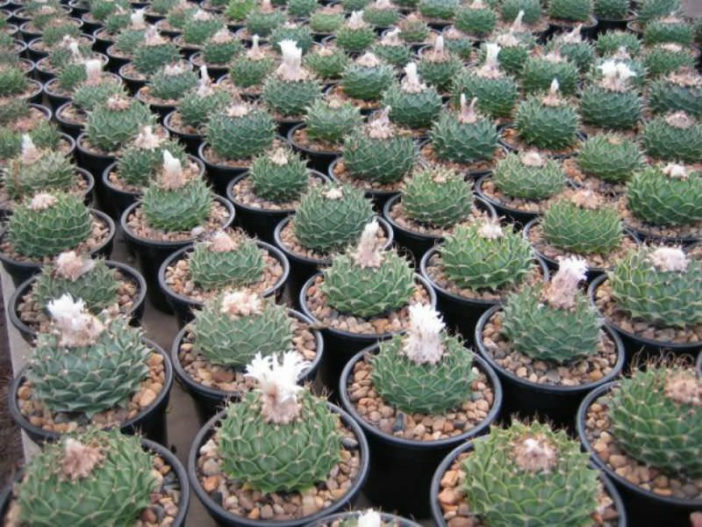 Commonly referred to as Artichoke Cactus, Obregonia denegrii is the only species in the Obregonia genus. Similar to Ariocarpus and Leuchtenbergia genus, Artichoke Cactus grows in a geophytic manner, with its body points spiraling from the growth point. While it does have spines, they are often shed from the plant, resulting in sparse patches of spines on the ends of the areoles. The spiraling, combined with the type of stem, results in the signature artichoke shape. Small flowers bloom from the tips of young growth in summer, resulting in an edible, fleshy fruit when fertilized and ripe. 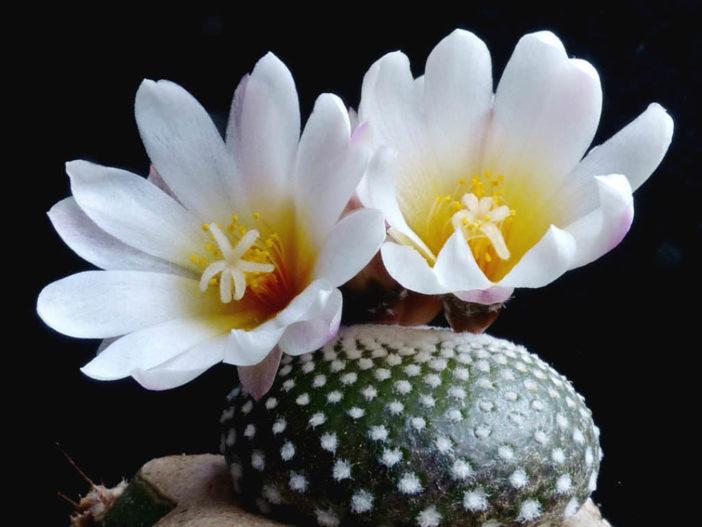 Often growing between rocks in the Andes mountains, Blossfeldia liliputana earns its name from the land of Lilliput in the novel Gulliver's Travels, where all its citizens were tiny to Gulliver. This is because B. liliputana is the smallest cacti, maxing out at 0.5 inches (1.3 cm) in diameter. Its size, as well as its growth patterns, make this small wonder especially unique. Cacti often have a rounded growth point, yet B. liliputana grows from an indent at the center of the plant. Flowering during the summer months, B. liliputana self-fertilizes and produces seeds that are so small they easily blend in with the surrounding rock and sand.