You are at:Home »Cultivation »Self-propagating Succulents

Some succulents make your propagation work easier by forming new plants mostly on their own. Some leaf succulents develop roots on their stems while still attached to the mother plant and sometimes leaves fall off succulents and root by themselves. Still, others develop newly rooted plantlets at their bases. For such plants, minimal effort is needed on the part of the gardener.

Many members of the Crassulaceae family grow prominent aerial roots along branch stems. If the branch bends over sufficiently to contact the soil, the branch roots into the ground at the point of contact. All you need to do is to cut the connection with the mother plant, dig the new plantlet up and give it a pot of its own. Some examples are Red Echeveria (Echeveria harmsii), Crinkle Leaf Plant (Adromischus cristatus), Pinwheel Plant (Aeonium haworthii) and many Kalanchoes. These plants all grow in U.S. Department of Agriculture plant hardiness zones 10 and 11 and can be grown as houseplants anywhere.

Another characteristic of many Crassulaceae family plants is the ability to grow an entire new plant from one leaf. Jelly Bean Plant (Sedum rubrotinctum) grows about 6 inches (15 cm) tall with sprawling branches that root as they go. Leaves are plump, reddish-green and the shape of a jelly bean. They turn bright red in winter. If a leaf falls from the plant, it grows a new plant from its basal end. Jade plant (Crassula ovata) does the same thing. Mother-of-millions (Kalanchoe x houghtonii) produces plantlets along the leaf margins, each of which grows into a new plant. It is so successful that in areas of Australia where it is hardy, it can become a noxious weed. These three plants are hardy in USDA zones 10 and 11. 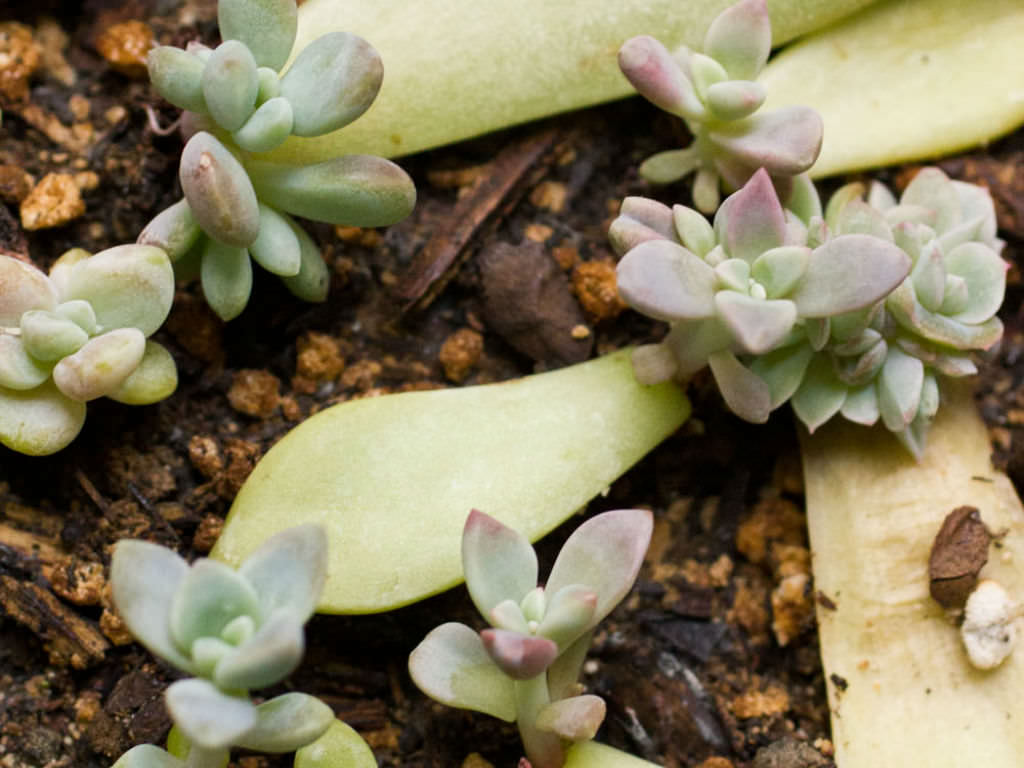 Succulent plants that form basal rosettes like Aloe and Haworthia produce new plants from the base of the mother plant. For a while, the plant remains attached to the parent plant, but as new offsets form, the outer plantlets, already with roots of their own, become disconnected from the parent. You can periodically unpot the plant, remove these independent little offsets and give them a pot of their own. Aloes grow in USDA zones 9 through 11, depending on the species, and Haworthias are hardy in USDA zone 11.

Pregnant Onion Plant (Ornithogalum caudatum), a member of the Lily family, is a stem succulent that produces a large, pale-green above-ground bulb with a papery white covering. When the plant is 2 to 3 years old, it starts to produce little bulbils here and there on the bulb under the papery covering. They eventually get big enough to break through the covering and can fall to the ground, growing roots and forming a new plant. You can also break them off when they are growing their own leaves and put them on potting soil to root. Pregnant Onion is hardy in USDA zones 9 through 11. The string of Hearts (Ceropegia woodii) forms little round tubers along its stems. Lay a stem with tubers along with potting soil, and the tubers will root into the soil. Disconnect the rooted stem from the mother plant to make an independent plant. The string of Hearts is hardy in USDA zone 10.