Adromischus is a genus of at least 28 species of small clumping succulents from South Africa. Before the revision of the genus by Tölken, a larger number of species were recognized. Many of these older names are currently regarded as synonymous with a range of forms combined into a smaller number of somewhat variable species. Adromischus marianae is particularly variable across its range, reflecting various plants with markedly different appearance into a single species. Some natural hybrids are known.

The attractively marked and colored leaves of many species appeal to collectors but require high light levels for the different colors to be seen to full advantage. In the shade, most species adopt a similar green color. As the plants age, some elongate losing leaves lower down their thickened stems.

Adromischus flowers are generally small, with a greenish-white tube and pink or reddish corolla. They produce sufficient nectar to start a fungal infection, especially towards the end of the growing season. As the flowers are not showy, many growers cut off the developing flower stems to avoid botrytis. The only species worth growing for its flowers is Adromischus phillipsiae. 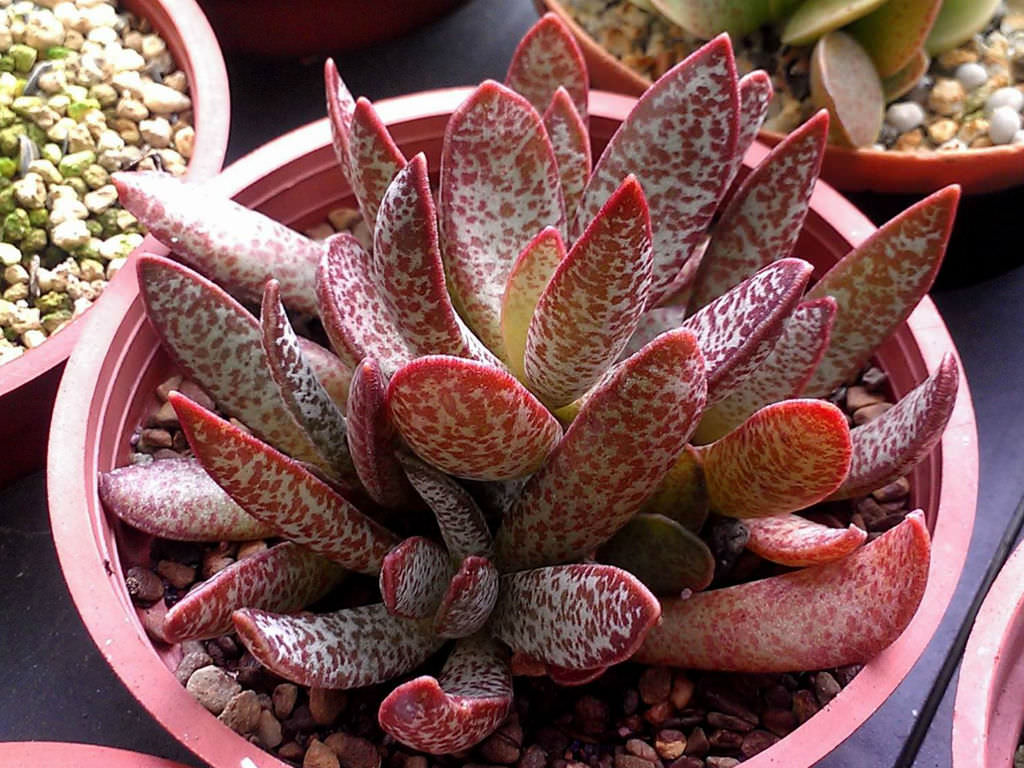 Adromischus are easy to grow in any well-draining soil mix. Their compact habit allows a collection to be maintained in a small space, and they grow well on any sunny window ledge or the top shelf of the greenhouse. Water mostly from spring to fall and let them dry out between waterings. Adromischus tolerate cold, frost-free conditions during the winter if kept dry. It is as well to keep water off the foliage during the winter. Mealybugs and vine weevils can be discouraged with a systemic insecticide. These succulents are frost hardy down to 19 °F (-7 °C).

Many species can be propagated from a single leaf, which should be placed against the pot's side so that the stem end is just touching the compost. Some species drop their leaves easily, and although each leaf will form a new plant, it can be a challenge to grow a large specimen. In other cases, leaves for propagation must be carefully detached with a sharp knife. Adromischus phillipsiae is easier to propagate from stem cuttings than from individual leaves.