Mammillaria microhelia is a beautiful small cactus that offsets freely to form a cluster. Stems are up to 10 inches (25 cm) tall and 2.4 inches (6 cm) in diameter. The radial spines are golden, while the central spines are reddish, almost black. They are up to 0.4 inches (1 cm) long. Flowers are up to 0.6 inches (1.5 cm) in diameter and form a ring around the stems in spring. They vary in color from pale yellow to pink. 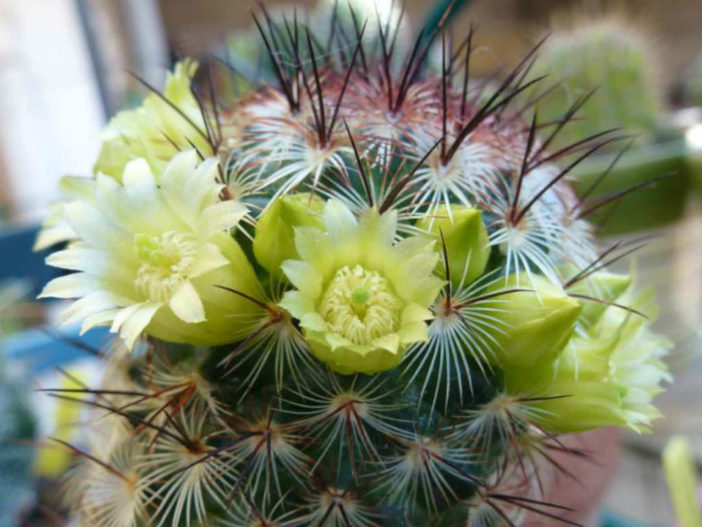 To encourage better flowering, allow the plants to enjoy a cooling period in the winter and suspend watering. Unlike many other cacti, which use their ribs as storage devices, Mammillaria feature raised tubercles, from which spines emerge. When you water, the tubercles will expand to allow for increased water storage. The flowers appear from these tubercles' axils on the previous year's growth, which accounts for their interesting halo effect. The cactus mustn't be exposed to prolonged dampness and sitting water. Never let your cactus sit in a dish of water. Lastly, make sure to fertilize during the growing season for the best results.

Repot as needed, preferably during the warm season. To repot Mammillaria, make sure the soil is dry before repotting, then gently remove the pot. Knock away the old soil from the roots, making sure to remove any rotted or dead roots in the process. Treat any cuts with a fungicide. Place the plant in its new pot and backfill with potting soil, spreading the roots out as you repot. Leave the plant dry for a week or so, then begin to water lightly to reduce the risk of root rot.

See more at How to Grow and Care for Mammillaria.

This species is endemic to Mexico.