Mammillaria is one of the largest genera of family Cactaceae with about 200 to 300 species, depending on several classifications. Most species are native to Mexico, but some come from the southwestern United States, Guatemala, Honduras, the Caribbean, Colombia, and Venezuela. The genus includes plants known commonly as Pincushion Cactus, Nipple Cactus, Fishhook Cactus, or Bird's Nest Cactus.

The generic name "Mammillaria" derives from the Latin "mammilla," meaning "nipple or teat," and refers to the tubercles that are among the distinctive characteristic of the genus. In the early 1800s, some authors have used the spellings "Mamillaria" and "Mammilaria," however, the accepted spelling for this genus is "Mammillaria."

The first species, Mammillaria mammillaris, was described by Carl Linnaeus as Cactus mammillaris in 1753. Adrian Hardy Haworth first described the genus in 1812.

Mammillarias are small cacti with globose or short cylindrical stems which grow either solitary or in clumps. The stems vary among species from 0.4 to 8 inches (1 to 20 cm) in diameter and 0.4 to 16 inches (1 to 40 cm) in height. Some species form mounds of more than 100 stems that can reach over 3.3 feet (1 m) in diameter. All species have spirally arranged tubercles with areoles and spines at the ends. The tubercles are conical, cylindrical, pyramidal, or round. Spines can be few or many, stiff, bristle-like, or hair-like. In the axils, between the tubercles, there can be wool or bristles or both. Flowers are funnel-shaped and range from 0.3 to 1.6 inches (0.7 cm to 4 cm) in length and about the same in diameter. They come in a wide range of colors, from white, greenish, and yellow to pink and red, often with a darker mid-stripe. Mammillarias typically start flowering in their second year, often forming a ring around the stem. Fruits are club-shaped or elongated, usually red but sometimes white, yellow, green, or magenta. Seeds are brown or black. 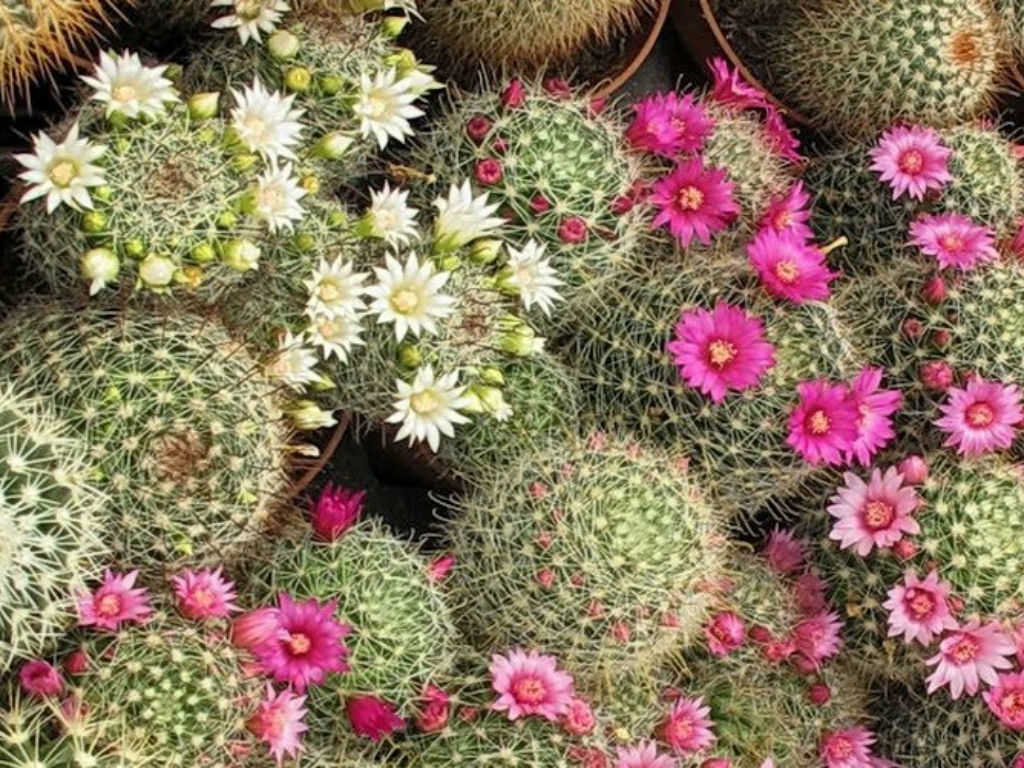 If you are growing cacti and succulents successfully, you will likely grow most Mammillarias without much trouble.

Mammillarias appreciate intense light, but many species dislike direct summer sun for too long. Plant them in an area of your garden that receives 4 hours of direct sunlight a day. If you are growing your Mammillarias indoors, place them near the brightest window in your home or office to ensure they get enough light. If possible, place the pots on the balcony or in the garden for extra light from spring to fall. Increase sun exposure gradually to prevent sunburn.

Mammillarias require a soil mix that provides root aeration and good drainage, whether grown outdoors or indoors. Use commercial cactus potting mixes or create your own potting mix with 70 to 80 % mineral grit such as coarse sand, pumice, or perlite.

Mammillarias are heat tolerant, but they are not cold-hardy plants. They thrive with temperatures between 70 and 80 °F (21 and 27 °C). In the winter, when Mammillarias go dormant, they like cooler temperatures between 45 and 55 °F (7 and 13 °C). These cacti can survive short exposures to several degrees below freezing but do not grow Mammillarias in the ground if they are subject to harsh weather conditions. If you live in a region that experiences temperatures colder than 30 °F (-1.1 °C), it is best to grow these cacti in pots that can be brought indoors.

Choose a pot with drainage holes that is 10 % wider than the plant. You can grow a Mammillaria in a pot that is 4 to 6 inches (10 to 15 cm) in diameter for years and have a happy plant.

Mammillarias are popular cacti favored for their beauty and ease of care. They are perfect cacti for beginners.

From spring to fall, water deeply and wait for the soil to dry out before watering again. Never let the pots sit in water. Suspend watering in the winter.

Mammillarias can benefit from fertilization during the growing season. The fertilizer will help them to thrive and bloom. Apply a water-soluble fertilizer for cacti and other succulents. A houseplant fertilizer higher in phosphorus than nitrogen, such as a 5-10-5 solution, can also be used. Suspend feeding during the winter when Mammillarias go dormant.

Repot every two or three years into a slightly larger pot. Make sure the soil is dry before repotting. The best time to repot a Mammillaria is late winter or early spring, but the repotting process can be done almost any time of the year. Do not water for a week or so after repotting to reduce the risk of root rot.

How to Propagate Mammillaria

There are two easy ways to propagate Mammillarias: by seeds or by dividing offsets.

The offsets readily form in clusters around the base of the mother plant. Carefully remove the offsets using tongs, a sharp, sterile knife, or razor blade. Allow the cut to callous over for several days before placing the offset in a pot with well-draining soil. The best time to remove offsets is in spring and summer.

Growing Mammillarias from seeds is an exciting way of increasing a collection. Sow the seeds in a pot with a well-drained soil mix in late spring or summer. Place the pot in a sunny spot and keep the soil moist until seeds germinate. At temperatures between 70 and 80 °F (21 and 27 °C), germination usually takes a week or two. The following spring, seedlings will be ready to transplant into their own pots.

Pests and Diseases of Mammillaria

Mammillarias are relatively disease-resistant but susceptible to pests such as mealybugs and scales.

Mealybugs and scales both damage Mammillarias by sucking plant juices. They are very difficult to see among the spines of the plants. These little guys have a waxy, white, cotton-like appearance. The root mealybugs are even harder to notice. They are found below the soil surface like white deposits on the roots. Scales are also difficult to detect.

These pests spread quickly from plant to plant. One way to control them is by using cotton swabs dipped in alcohol. Spraying the plant with 70% rubbing alcohol may help control the pests that are not easily visible.

Most problems associated with Mammillarias grown as houseplants are bacterial or fungal diseases caused by overwatering. Removal of the affected parts of the plant is the only way to control the spread of infection. Once a Mammillaria has collapsed, it is too late for treatment.

Mammillarias are considered non-toxic to both humans and pets.