Orostachys is an Asian genus of monocarpic, rosette-forming succulents, similar in appearance to Echeveria and Sempervivum, but it looks most similar to Aeonium. One of the significant differences between Aeonium and Orostachys is that each leaf is tipped with a spine. These succulents are fast-growing plants with grey or green leaves forming small globular rosettes. The small bell-shaped flowers are usually white or pink and grow densely packed on conical inflorescences (which are quite amazing to see, up to 12 inches (30 cm) tall). Natively, the plant lives in Korea, China, Mongolia, and Northern Japan.

Some species show fantastic symmetry of the rosette. Orostachys spinosa is of note, as the leaf pattern follows a Fibonacci sequence.

As with most similar genera of Crassulaceae, Orostachys survive in fairly poor soil, so long as it is well-draining. The species are very cold-hardy and can withstand temperatures down to -30° F (-34° C). Allow soil to dry to the touch between waterings, and avoid getting water on the rosettes. Orostachys requires some bright light. These plants don't tolerate high humidity well. They grow actively in spring and summer. 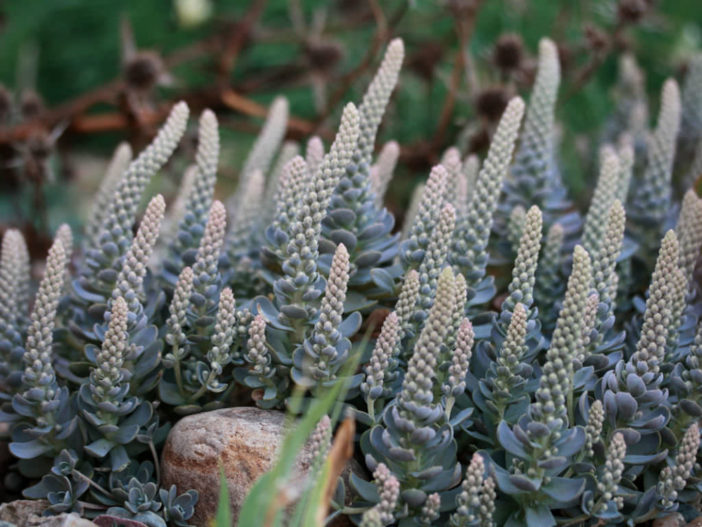 Orostachys self-propagates through offshoots and given time. One plant will form a dense mat of many. Propagation is primarily through offset separation.

To separate an offset, remove soil from the offset's base to find the stolon (thick root which attaches the pup to the mother plant). It is best to use an offset that has already established some roots of its own. Cut the stolon close to the pup (to discourage roots growing from the stolon). Place the offset into a small pot with well-draining, sandy soil. Do not water until new growth is noted.

Pruning: In general, this is an excellent plant to forget about. Leave it in a bright sunny location and water very sparingly. Water in the morning to prevent water from remaining on the leaves during the night. Remove any dead leaves from rosettes, as they invite rot and insects. When a rosette has flowered, it will die shortly.

Problems: In the event of an unhealthy plant, the first thing to examine is your watering habits. The most common problem is root rot due to overwatering. If the soil is too wet, don't hope it will safely dry out so long as you don't water it for a while. Replace the soil immediately.

One of the most common pests to houseplants is the mealybug, and your Orostachys may fall prey to this pest. However, due to the tightly-packed leaves, the mealybugs will attack the roots more often than not. This makes them far less visible than mealybugs, which attack leaf-stem junctions. The symptoms of a root mealybug infestation are slowed or stopped growth (though in winter, this is a normal sign of dormancy). If this occurs without apparent cause, remove the plant from the pot and examine the roots. A white cottony substance on the roots and in the soil is a sure sign of mealybug infestation. Remove all soil and wash the roots gently. Remove any roots which appear damaged with a sharp, sterile knife or scissors. Let them dry very thoroughly before replanting.