One of the common names for Dudleya is "Liveforever", which speaks volumes about this western North American genus that thrives on neglect. Some species reputedly live as long as fifty to one hundred years, others a "mere" twenty. This genus contains several of California's most rewarding succulents for use in horticulture. Its numerous species offer a dizzying array of leaf shapes, sizes, habits, and flower colors for the garden.

Garden forms of Dudleyas come in two distinct types: branching and unbranching. Both types are ideal for succulent and rock gardens. Branching species develop multiple rosettes that form low, tufted colonies, while unbranched species produce a solitary rosette. The colony formers are valuable groundcovers in the front of a border, whereas the single rosettes make excellent container specimens and focal points in beds.

Most of the myriad habitats Dudleyas occupy become dry in summer. Therefore, it is important to cut off water to Dudleyas in your garden during the summer. Plants grown in sandy soils or containers are exceptions; they will accept infrequent summer watering as long as the soil drains well. The onset of fall or winter rains reawakens Dudleyas from drought-induced dormancy. Their shriveled leaves plump up quickly, growth resumes, and flowering occurs during the next spring or summer. Dudleyas are amazingly resilient; if a portion of a colony sloughs off a cliff face or is uprooted by a burrowing animal, it can persist for months until soil contact is reestablished. Species that naturally grow on ocean bluffs are also salt-spray tolerant. 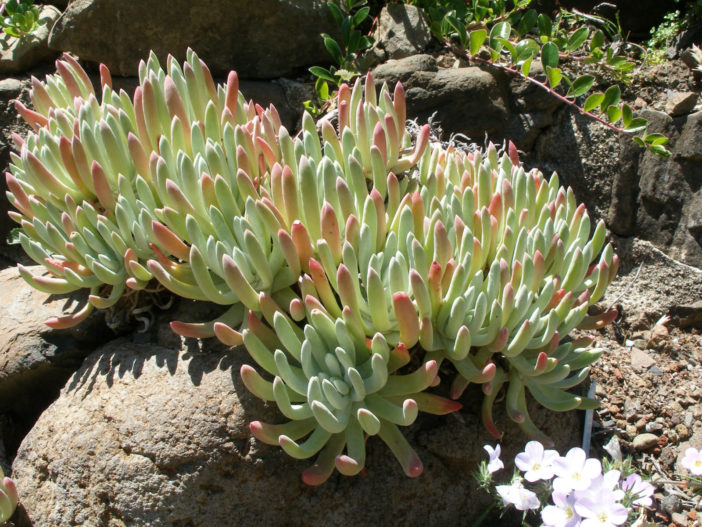 Dudleyas have their share of disease and pest problems. If you can prevent Argentine Ants from introducing mealybugs or aphids to your Dudleyas, they will be healthier. Mealybugs nestle in the deep recesses of the leaves, and their feeding weakens the plants. They may also be vectors, along with aphids, for a virus that disfigures the foliage. Aphids commonly attack emerging flower stalks and should be washed off carefully with soapy water or a strong jet of water.

Snails and slugs relish the juicy foliage of Dudleyas and leave telltale holes. Avoid overwatering, which attracts these creatures and also favors root-rotting, soil-borne pathogens that may kill the plants. Provide ample air circulation to minimize fungal disease organisms, such as powdery mildew and Alternaria. Powdery mildew invades leaf tissues and causes browning and scarring of the upper surface; Alternaria produces ugly brownish-black spots. Dudleyas are particularly susceptible to rot above ground if moisture accumulates in the rosette; plant them on a slight angle to drain water away more quickly.

Only a handful of the roughly forty species of Dudleya are reliably available. Several species are quite rare in the wild and are now protected by law. Thankfully, many nurseries and botanic gardens continue to responsibly propagate many choice species. For greatest success in cultivation, choose species from your local area.