Euphorbia flanaganii, commonly known as Medusa's Head, is one of the caudex-forming Euphorbiias, similar to Euphorbia procumbens (also know as Euphorbia pugniformis), Euphorbia esculenta and Euphorbia caput-medusae.  It gets its common name from both its general reptilian appearance and the fact that it will grow to the size of a human head if left alone. It's a member of Medusoid Euphorbias, a group of succulents native to South Africa.

The structure of a typical Medusa's Head is separated into the arms and the central caudex. As the plant grows, new arms form near the edges of the caudex, gradually spreading out as the plant grows, and the old arms shrivel up and die. Once it is situated and happy, it demonstrates its contentment with life by producing a ring of chartreuse blooms, each about the size of a ball bearing, around the caudex.

Unlike most succulents, Medusa's Head does not handle long periods of drought well. It may need weekly watering during the summer. Water whenever the soil is dry several inches below the surface. It warns of a lack of water by gradually curling up its arms toward the center. Water deeply, but don't let them sit in wet soil, which can cause root rot. 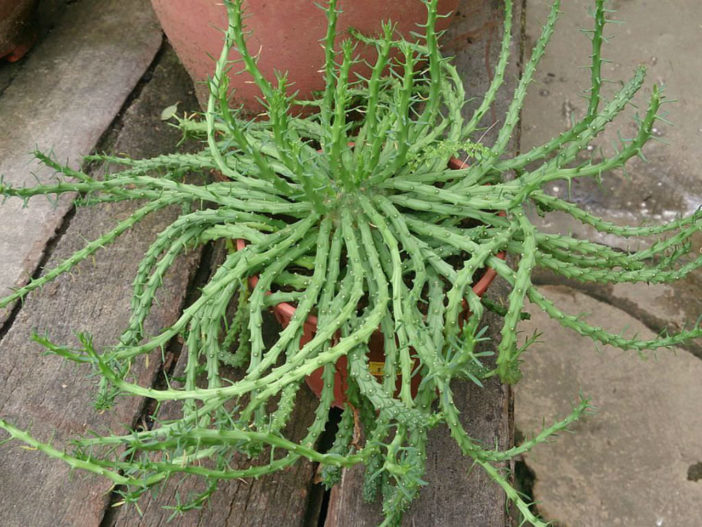 It thrives under direct sun, and needs at least 6 hours of direct sun per day for decent health and growth. On brighter subjects, Medusa's Head makes an exceptional container plant, and it can also be put into gardens so long as it is protected from freezes.

Once it reaches a certain size, a mother plant will produce pups on the ends of older arms. The growth starts as a swelling at the end of an arm, and rapidly grows its own caudex and arms. After a time, if they don't root on their own, the arm shrivels and allows the pup to roll away, where it rapidly grows if given access to soil and water. If you're not careful, you can end up with a whole greenhouse full of them.

Medusa's Head don't sunburn easily. It require good drainage, but it is not fussy about soil conditions otherwise, and it grows well over a wide range of pH levels. Medusa's Head don't seem to be susceptible to any parasites or diseases seen among other succulents, and it requires only the occasional dash of fertilizer.