Euphorbia is one of the largest genera of flowering plants with about 2,420 recognized species. This genus belongs to the very large and diverse family Euphorbiaceae, commonly known as Spurge Family. The species occupy a wide range of habitats, from tropical areas of Africa, Madagascar, and the Americas to warmer, temperate regions of Asia and Europe. Some species can also be found in the Pacific Islands and Australia. Most succulent Euphorbias are native to tropical areas of Africa.

The genus was first described by Carl Linnaeus in 1753 based on its type species Euphorbia antiquorum.

Euphorbias range from annual, biennial, or perennial herbs to woody shrubs or trees, all having a poisonous milky sap, called latex. About 1,000 species are more or less succulent. The main stem and branches of the succulent Euphorbias are thick and fleshy, thorny, or unarmed. Leaves can be opposite, alternate, or in whorls. In succulent species, the leaves are usually small and short-lived. All members of the genus have unisexual flowers that occur in a cluster known as cyathium. Most species are monoecious, produce male and female flowers on the same plant, and a few are dioecious, producing male and female flowers on different plants. Fruits are usually three-lobed capsules, almost always ripening to a woody container that split open, sometimes explosively ejecting its four-angled, oval or spherical seeds. 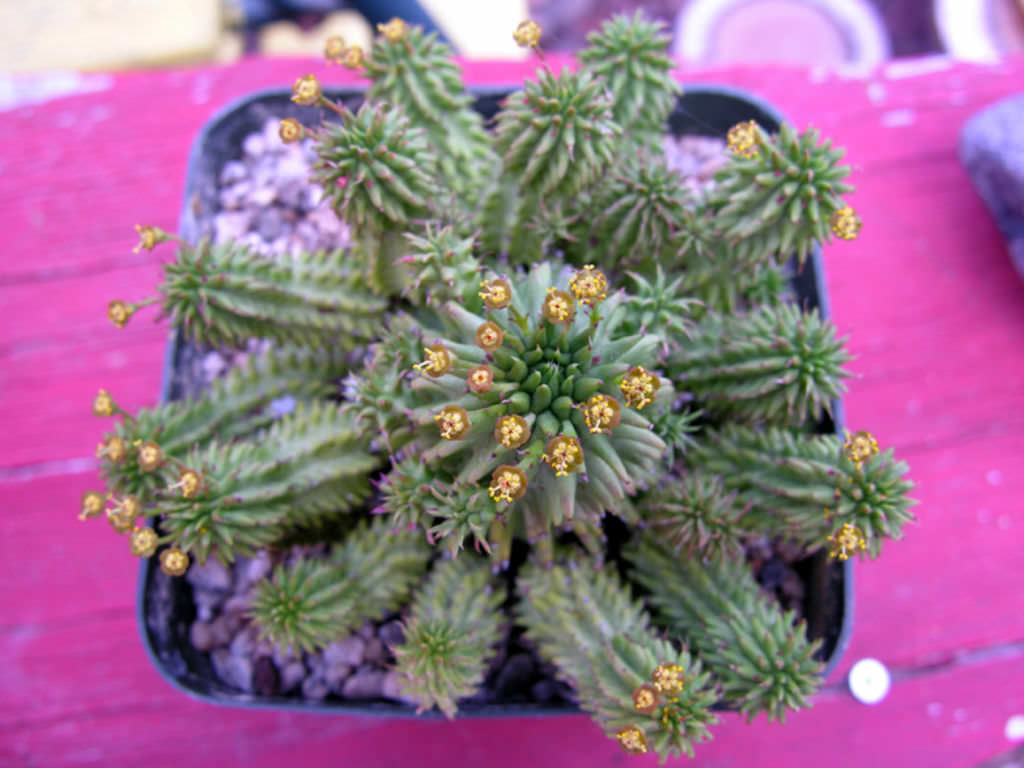 Succulent Euphorbias are among the plant most commonly confused with cacti. The species native to desert habitats have thorns, but they are different from the spines of cacti.

Plants of the genus Euphorbia are commonly called Spurge, a name that derives from the Middle English or Old French "espurge," meaning "to purge," due to the use of the Euphorbia's sap as a purgative.

The generic name "Euphorbia" probably honors Euphorbus, the Greek physician of King Juba II of Numidia and Mauretania, who married Cleopatra Selene II, the daughter of Antony and Cleopatra.

Euphorbias native to desert habitats require conditions much like those adequate for cacti. They are adopted for outdoor cultivation in dry temperate regions but also grow well as container plants indoors or outside.

Most Euphorbias are sun lovers, but some will tolerate partial shade. Place your indoor Euphorbias on windows with southern or southeastern exposure. From spring to fall, you may place the pots on the balcony or in the garden. Increase sun exposure gradually to prevent sunburn.

Euphorbias require well-drained soil. They even thrive in poor, dry soils. Use a commercial mixture formulated for cacti and succulents, or make your own potting mix.

Select a pot 2 to 3 inches (5 to 7.5 cm) larger in diameter than the plant's base. Use only pots with at least one drainage hole in the bottom.

Euphorbias are very easy to care for, as long as the growing conditions are right.

Succulent Euphorbias can survive drought, but that does not mean that they need it. From spring to fall, water when the top inch (2.5 cm) of soil feels dry. Reduce watering in winter. Give them just enough water to prevent wilting. The best time of the day to water your Euphorbias in the warm season is evening. Watering in the morning before temperatures rise is also acceptable, and it may even be better during the winter months.

Each species has its own nutritional requirements, but every Euphorbia will benefit from fertilizer. Plants in pots need regular feeding. Apply a balanced fertilizer in a 10-10-10 NPK formulation, diluted to 1/4 strength once a week during the growing season.

Some Euphorbias need to be regularly pruned to control their size and prevent them from getting out of hand. When pruning Euphorbias, always wear gloves, use eye protection, and avoid contact with the milky sap, as it is a strong irritant.

Euphorbias will benefit from repotting, but they do not need to be repotted every year. When your Euphorbia is outgrowing its pot, it is time to repot the plant in a larger pot and give it a fresh potting mix. The repotting is best done in early spring, at the beginning of the growing season. Wait for a week or two before watering the repotted plant. Wear gloves, protective clothing, and appropriate eye protection when repotting all Euphorbias.

How to Propagate Euphorbia

The easiest and fastest method of propagation for many species is by using cuttings. Euphorbias can also be grown from seeds, but they can be difficult to germinate, even hard to find.

Use a sharp, clean knife to take cuttings. It possible, cut the branching species at the branching point. Solitary plants can be decapitated to encourage the production of offsets that can later be removed and rooted. The best time to take cuttings is in spring or summer. Wash away the milky sap that appears after cutting in a glass of water or by spraying. Allow the cutting to callus for several days before placing it in a well-draining soil mix. Dusting the cut surface with a rooting hormone powder will help roots form. Rooting can take longer than expected but is speed up by raising the soil temperature to around 77 °F (25 °C).

For Medusoid Euphorbias and some other species, the two-step cutting method is required. First, take a cutting in the normal way. When it has rooted, make a second cut just above the point where the roots have formed.

Some Euphorbias from Madagascar are successfully propagated from leaf cuttings.

Sow Euphorbia seeds in a commercial seed growing mix or well-drained soil in spring. Keep the soil moist until seeds germinate. At temperatures between 70 to 80 °F (21 to 27 °C), germination usually takes 1 to 2 weeks.

Several rare and delicate Euphorbia species are grafted because they are easier to keep, grow faster, and produce more flowers when they are on more vigorous stocks.

Pests and Diseases of Euphorbia

Euphorbias are less susceptible than many other succulents to pests and diseases.

The most common pests on Euphorbias are mealybugs, spider mites, scale, and whiteflies. These pests are difficult to control because they are small and excellent hiders, making them hard to see. Correct pests identification is the first and most important step for selecting the more efficient control options.

Mildew is a fungal disease that appears as a white or gray powdery film on parts of the plant. It is caused by high humidity, poor ventilation, insufficient light, and lack of nutrients. Isolate Euphorbias that start showing powdery mildew symptoms. Neem oil is a good choice to reduce or eliminate mild to moderate mildew infections.

All Euphorbias produce a white milky sap that is toxic and can cause irritation to the skin and eye. It is best to keep the plants away from children and pets.