Lithops is a genus of about 40 species of succulents in the Ice Plant family, Aizoaceae. They are native to southern Africa, generally found in arid regions of Namibia, South Africa, small bordering areas in Botswana, and southern Angola. The genus members are commonly known as Living Stones or Pebble Plants because they avoid being eaten by animals by blending in with surrounding rocks.

The genus was first described by William John Burchell in 1811 based on the specimen discovered during a botanical expedition in southern Africa. Although he called it Mesembryanthemum turbiniforme, it is now synonymous with Lithops hookeri.

The generic name "Lithops" derives from the Ancient Greek words "lithos," meaning "stone" and "ops," meaning "face," and refers to the stone-like appearance of the plants. The word "Lithops" can be used as both singular and plural forms.

Lithops are small, nearly stemless plants with one or more pairs of thick, fleshy, opposite, almost fused leaves. All plants look quite similar to each other, differing in the shape, size, color, and texture of the body. In habitat, they only grow from 0.5 to 1 inch (1.3 to 2.5 cm) tall and from 1 to 3 inches (2.5 to 7 cm) wide. Flowers and new leaves arise from the meristem in between the leaves. The leaves are more or less buried below the soil's surface, with only the translucent top surfaces visible that allow light into the inner portion of the leaves for photosynthesis. In winter, each pair of leaves is replaced by a new pair. In spring, the old leaves slowly begin to shrivel away on either side. Flowers are daisy-like, often sweetly scented, usually yellow or white, and appear after the new leaf pair has fully matured. They open in the afternoon on sunny days, close again in the late afternoon, and last for 4 to 5 days. 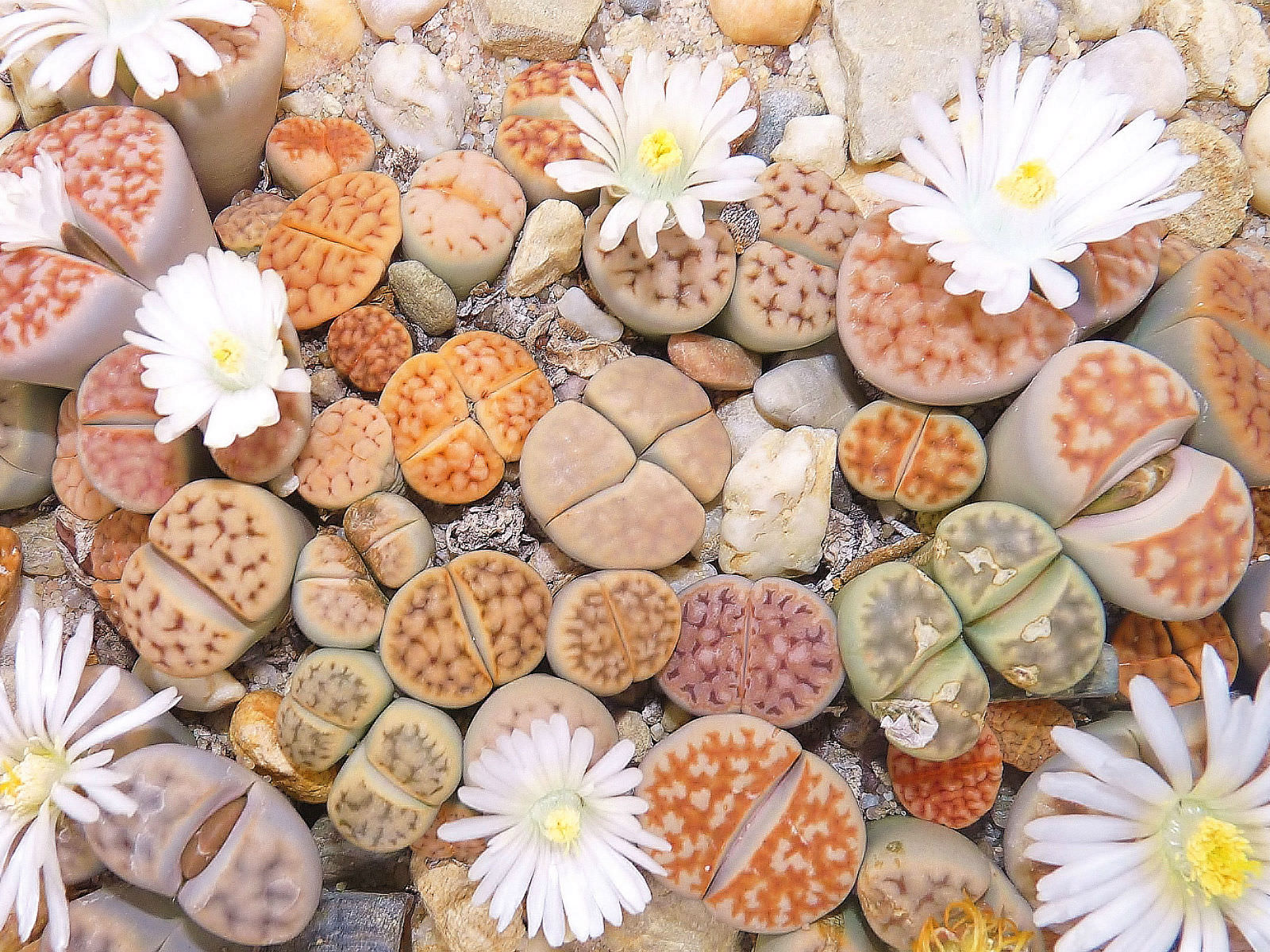 Lithops are succulents that are easy to grow once you understand their basics needs. They make a lovely addition to any indoor and outdoor rock garden.

These plants have adapted to intense sunlight in the wild, so they require a good amount of direct sunlight when grown indoors. A sunny windowsill where plants receive 4 to 5 hours of direct sunlight during the early part of the day and partial shade during the afternoon is the perfect spot to grow your Lithops. If they do not receive enough sunlight, Lithops will begin to grow slender and elongated and lose coloration. From spring to fall, you may place the pots on the balcony or in the garden. To prevent sunburn, expose the plants to sunlight gradually over several days.

Lithops thrive best in a growing medium that will drain quickly. Use a commercial soil mix for succulents or make your own mix.

High temperatures are not a problem for Lithops as long as there is plenty of fresh air, but they are not cold-hardy succulents. If you live in colder areas of the world where winter temperatures drop below freezing, it is best to grow Lithops in containers that can be brought indoors.

Lithops need a larger pot than the plant size would indicate because they have an extensive root system. Pots that are about 3 to 5 inches (7.5 to 12.5 cm) deep are recommended. Use only pots with drainage holes in the bottom.

Lithops are easy to care for as long as they are provided with the right growing conditions.

Lithops have a specific yearly cycle of growth, and it is important to water only during certain stages, but it is also important to keep the soil dry at other stages of their growth.

Here are some guidelines for you to follow, but remember, this may vary somewhat from species to species.

How often you need to water Lithops depends on how quickly the potting mix dries out. It is essential to let the soil dry out between waterings. Too much water can lead to root rot or produce a new pair of leaves at the wrong time of year. Never water Lithops deeply when they are dormant.

Lithops do not need to be fertilized. They will thrive without any feeding. If you decide to feed, use a fertilizer with high potassium and low nitrogen levels.

Lithops will happily stay in the same pot for several decades. The common reason for repotting is to divide the plants or to allow space for clusters to grow. Repot only when the Lithops growing season starts. Be very careful not to damage the roots in the process. Damaged roots can cause death to the plant.

How to Propagate Lithops

Lithops are most often grown from seeds. If you have multi-headed plants, they can also be propagated by division.

Saw the seeds during the summer in a pot with a commercial seed growing mix or well-drained soil mix. Cover the seeds with a very thin layer of fine sand. Place the pot in a sunny spot and keep the soil moist until seeds germinate. The first seeds will germinate in a few weeks, but do not expect all to germinate at the same time. Some seeds can take up to a year to germinate. Reduce watering gradually as the seedlings grow. When they are 2 to 3 months old, provide them with about 5 hours of sunlight per day, and start letting the soil dry out between waterings. The seedling can be transplanted when they are about a year old.

If your Lithops has grown into a cluster, it can be propagated by division. Remove the plant from its pot, carefully cut through the roots and replant the heads in individual pots.

Pests and Diseases of Lithops

Overwatering is the most common cause of Lithops failure. They may get a few pests and several fungal diseases.

Spider mites on Lithops are a common pest problem. They thrive in dry environments and usually live in the fissure between the leaves or hidden between the old and new leaves. The first visible symptoms of a spider mite problem are small pale spots on the leaves. It is hard to get rid of spider mites, but it is not impossible.

Isolate the infested plant away from other plants. Spray the leaves with pressure water to dislodge some of the spider mites. Neem oil is quite effective against spider mites. Insecticidal soap is also used to control spider mites.

The most common plant diseases typically have little to no impact on Lithops.

Lithops are non-toxic and safe to have around children and pets. There are even some references to African children that they eat these plants to quench their thirst.