Haworthiopsis is a genus of 18 dwarf succulents formerly belonging to the genus Haworthia. All species are native to southern Africa and restricted to South Africa, Namibia, as well as Swaziland, and possibly Mozambique.

Gordon Rowley erected the genus in 2013. Its type species is Haworthiopsis coarctata.

The generic name "Haworthiopsis" refers to the similar appearance of these plants to Haworthias and to the fact that they were previously included in the genus Haworthia. The ending "opsis" derives from the Greek "opsis," meaning "appearance," hence the genus name, which means "like Haworthia."

These attractive succulents have small rosettes of fleshy leaves that are generally tougher and have a thicker epidermis than Haworthias. Leaf fibers are also present in some species. The shape, size, color, and texture of leaves vary considerably from species to species. Haworthiopsis are solitary or suckering to form dense groups, and some even offset from underground stolons. Some species are stemless, while others have their leaves compactly arranged around elongated stems. Flowers appear in racemes on long slender stalks in spring and summer, but repeated sporadic flowering is not uncommon, especially in cultivation. Each flower is with white to green, pink, or brown tepals, forming a two-lipped structure. The fruits are narrowly ovoid capsules with black or dark brown seeds.

Some Haworthiopsis are used by traditional healers as a spiritual remedy to ward off evil, as well as blood purifiers and cures against coughs, skin rashes, sunburns, and burns. 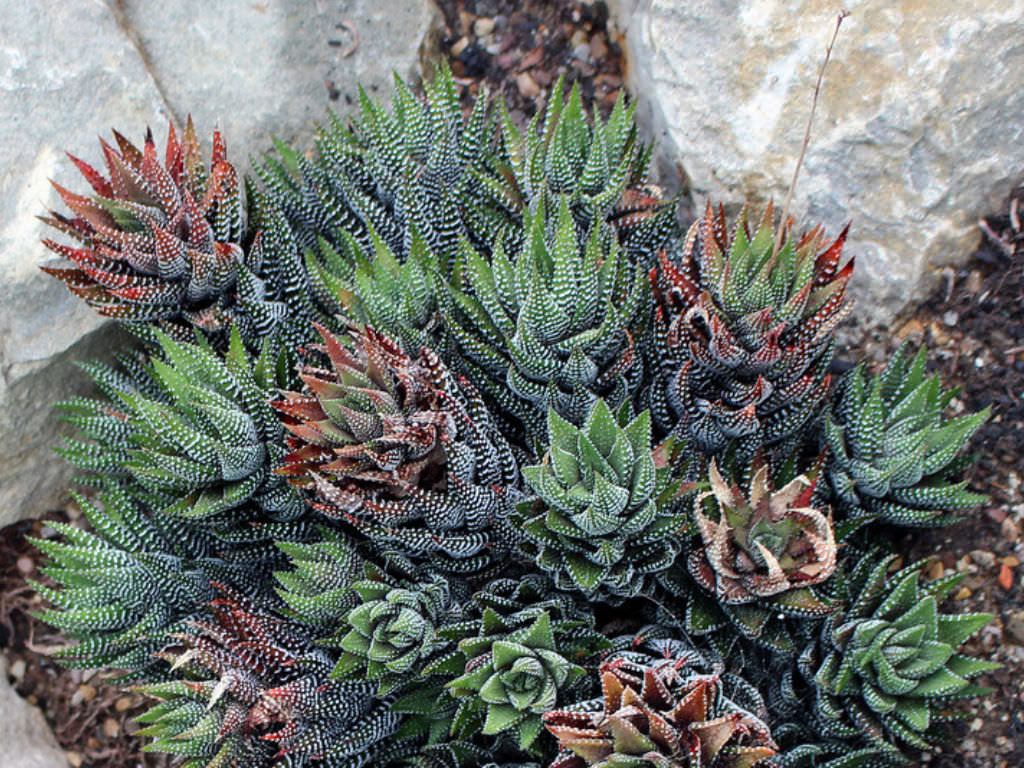 It is best to plant Haworthiopsis in a pot that can be brought indoors. In frost-free areas with lower rainfall, some species can be grown successfully planted in sheltered areas amongst rocks, where they will form clusters over time.

Even though most species can tolerate full sun, these succulents thrive in semi-shaded positions. However, brighter light conditions are needed to bring out the leaf coloration. Any window in your home or office is likely to be an appropriate setting for Haworthiopsis.

Plant your Haworthiopsis in a commercial soil mix specially formulated for succulents, or make your own well-draining potting mix.

Haworthiopsis like warmer temperatures in the summer but cool in the winter. They can tolerate cold down to USDA hardiness zone 10a, 30 °F (-1.1 °C).

Haworthiopsis are not difficult plants to grow, but keep in mind that they are succulents and require appropriate conditions and care.

As with all succulents, the biggest problem with Haworthiopsis is overwatering. The best way to water these plants is to use the "soak and dry" method. Get the soil thoroughly wet, and then wait until it is dry before watering again. Water your Haworthiopsis less during the winter when their growth slows down significantly. During the hottest summer months, when Haworthiopsis are mostly dormant, water just enough to keep the leaves from shriveling. If you use saucers, empty any standing water promptly. Never allow water to sit on the rosette.

Haworthiopsis are slow-growing succulents and they do not require much fertilizer. For optimum growth, fertilization is a good idea. Feed only with a dilute fertilizer and only during the active growing season. Avoid summer fertilizing as Haworthiopsis are in a 6 to 8 weeks rest period.

When the plant has outgrown its container, repot it in the spring or early summer into a new, slightly larger pot with fresh soil. Repotting time is also the time to take offsets for propagation.

Haworthiopsis are mostly and easily grown from stem cuttings or by removing offsets from the mother plant.

Remove stem cuttings during the warmer months, left to dry for a couple of days, and plant shallowly in a well-draining potting mix. Water sparingly until the cuttings show signs of growth.

Remove offsets when they have started developing their roots. Older clumps can also be divided into individual plants and replanted.

Haworthiopsis can also be propagated by seeds. Sow the seeds in spring in a well-draining potting mix and keep the soil slightly moist. Germination usually takes two weeks. Transplant the seedlings into individual pots after the first or second year.

Unlike Haworthia and Tulista, these succulents are not as easy to propagate from leaves.

Pests and Diseases of Haworthiopsis

Haworthiopsis are generally free of most pests that attack succulents. The one exception is mealybugs. They can be a problem but easily resolved by physical removal or with standard houseplant insecticides. When soil is kept too moist, fungus gnats can be another problem.

Constantly wet soil can also lead to root rot, a common problem with Haworthiopsis. Symptoms of a rotted root include the stoppage of growth, reduction in plant or leaf size, or leaf shriveling.

Haworthiopsis species are generally considered non-toxic to humans and animals.