Haworthia is a genus of about 150 species of small succulent plants. Like Aloe, Gasteria, and Astroloba, they are members of the family Asphodelaceae. Most species are endemic to South Africa, with some species extending into neighboring countries, in Swaziland, Namibia, and Mozambique. Many species of Haworthia have been moved into new separate genera Haworthiopsis and Tulista.

Haworthias solitary or can be clump-forming with usually stemless rosettes of fleshy leaves that vary in size, shape, texture, and color. Even two plants that grow side-by-side in the same collection can have an entirely different coloration or markings. Flowers are small, generally white, and borne in slender inflorescences that are usually erect and unbranched.

Haworthias are usually grown in containers as indoor plants, but you can bring them outdoors in summer. They are also grown outdoors in areas where frosts are infrequent and of short duration. 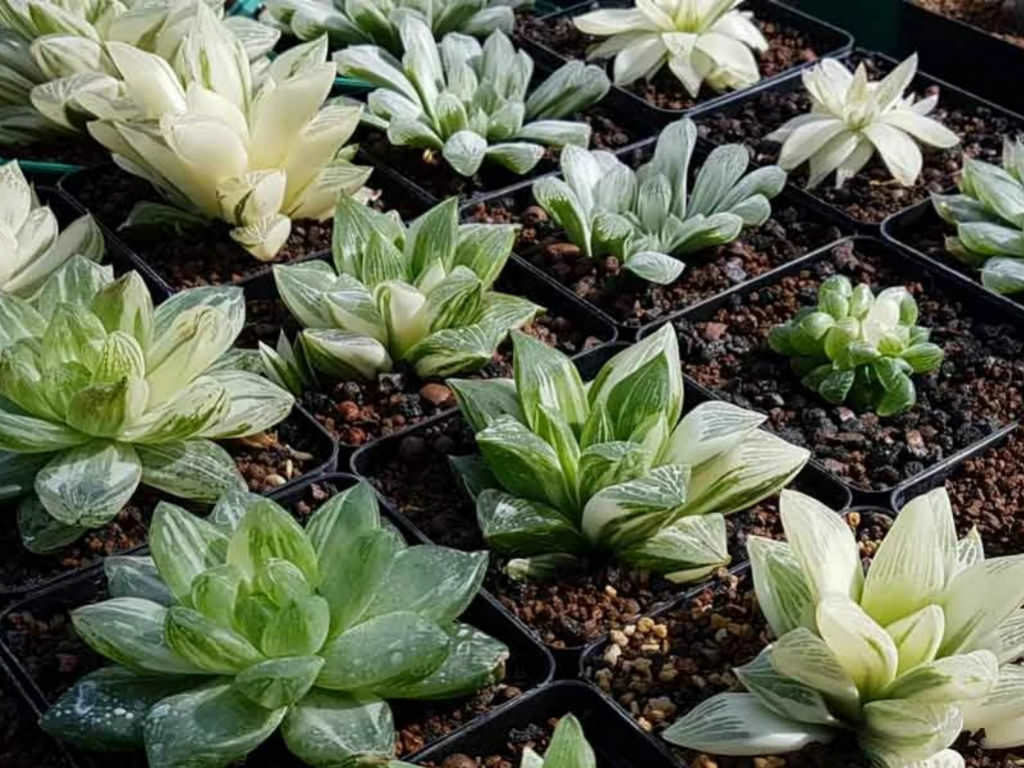 Although some species can grow in full sun, most Haworthias live in more sheltered spots, and they are adapted to thrive in partial shade. In habitat, they tend to grow under bushes and rock overhangs. This adaptation makes them well suited to lower light conditions found in homes and offices. Place the potted plants in a bright area with some protection from the hottest rays of the day. White, yellow, or red-tinged leaves usually indicate that your Haworthia is receiving too much sunlight. Deep shade tends to weaken the plant over a prolonged period. Haworthias grow very well under artificial lights. If they have spent the winter indoors, gradually move your plants outdoors into the bright sun to prevent sunburn.

All Haworthias do not like their roots to remain wet for prolonged periods, so their potting soil should be well-drained. In habitat, they are found growing in sandy soils in rocky areas. Use a commercial succulent potting mix or make your own.

Haworthias like warmer temperatures in the summer but cool in the winter. The natural cooler temperatures found in an unheated room during the winter are perfect. However, Haworthias do not like being too cold. They do best in the temperature ranging from 75 to 90 °F (24 to 32 °C). Some species can survive a light frost for a short period, but it is best not to take chances. Most Haworthias are cold hardy down to USDA hardiness zone 10a, 30 °F (-1.1 °C).

Shallow pots are generally better than deep pots, but some Haworthias have large, thick roots that ask for a deeper pot. Be sure that your container has at least one drain hole.

Haworthias are one of the easiest succulents to care for, which makes them popular houseplants. They are great plants for beginners.

These succulents are very tolerant of underwatering, but overwatering can quickly lead to rotting. During the hottest summer months, when Haworthias are mostly dormant, water just enough to keep the leaves from shriveling. From fall to spring, when growth is most active, water the plants thoroughly, then wait until the top of the soil dries out before watering again. Water your Haworthias less during the winter when their growth slows down significantly. If you use saucers, empty any standing water promptly.

Haworthias are small, slow-growing succulents, and they do not require much fertilizer. For optimum growth, fertilization is a good idea. Feed only with a dilute fertilizer and only during the active growing season. Avoid summer fertilizing as Haworthias are in a 6 to 8 weeks rest period. Do not fertilize newly potted plants for the first year.

These succulents are generally slow-growing and can stay in the same pot for years. For best health, Haworthias should be repotted into fresh soil every two to three years. Many Haworthias freely offset and form clusters much larger than the individual plant. When the cluster has outgrown its pot, repot your Haworthia in spring or fall. Clean any dead or shriveled leaves, and move the plant into a larger pot with fresh soil mix only if the cluster covers the entire surface of the soil. Repotting time is also the time to take offsets for propagation.

How to Propagate Haworthia

Vegetative propagation, especially by offsets, is the quickest and most common method of propagating Haworthias. These succulents can also be propagated by leaves and seeds.

Besides being the easiest method to propagate Haworthias, offset propagation also helps keep a good plant shape. Most Haworthias will make offsets sooner or later. Remove the offsets when they have started developing their own roots. Allow the offsets to dry out for one or two days and plant them in a small pot with a well-draining soil mix. Put the pot in a warm, bright spot and water when the soil is dry.

Those plants that never or only rarely offset can be propagated from leaf cuttings. Remove a healthy leaf from the main rosette along with a slight bit of attached stem tissue. Allow the leaf to callous over for several days, and then put in a container with a well-draining soil mix. Keep the container in a bright place without direct sunlight and water when the top of the soil is dry. In many cases, one or more new plants will slowly form from the leaf. Roots will appear in weeks, but rosettes often take a longer time to develop.

Sow seeds in spring or fall in a well-draining soil mix. Keep the soil moist until germination that usually takes one to two weeks. Transplant seedlings into individual pots after the first or second year.

Pests and Diseases of Haworthia

Haworthias are generally free of most pests that attack succulents. The one exception is mealybugs. They can be a common problem but easily resolved by physical removal or with standard houseplant insecticides. When soil is kept too moist, fungus gnats can be another problem.

Constantly wet soil can also lead to root rot, a common problem with Haworthias. Symptoms of a rotted root include the stoppage of growth, reduction in plant or leaf size, or leaf shriveling. Occasionally such root rots can move into the stem resulting in the death of the plant.