Conophytum is a genus of about 110 succulents that belong to the group of plants called Mesembs. The name "Mesemb" is derived from the old family name Mesembryanthemaceae, now placed in Aizoaceae. The species are native to South Africa and southern Namibia, typically found in the arid and semi-arid winter rainfall areas. They are commonly known as Button Plants, Cone Plants, or Dumplings.

The genus is sometimes wrongly referred to as Conophyton, a generic name suggested by Adrian Hardy Haworth in 1821. The generic name "Conophytum" derives from the Latin "conus," meaning "cone" and the Greek "phytum," meaning "plant," and refers to the fused, cone-shaped leaves in most of the species.

Conophytums are dwarf plants that usually form dense clusters of leaf pairs, but some species are solitary. The bodies consist of two fleshy, partially or entirely fused leaves and range in height from 0.25 to 2 inches (0.6 to 5 cm). They can be bilobed, ball-shaped, tubular to conical, egg-shaped, or cylindrical with very smooth to hairy, or slightly rough epidermis, sometimes spotted, lined, or windowed. The plant colors range from shades of green and blue to red and brown. Conophytums can be divided into day-blooming, twilight-blooming, and night-blooming species. Most of them produce flowers in late summer through fall. The flowers are small, daisy-like, and in a wide range of colors with yellow or orange centers.

Some species of Conophytum are mistaken for Lithops. Their conically united leaves and petals fused into a basal tube distinguish them from most other mesembs. 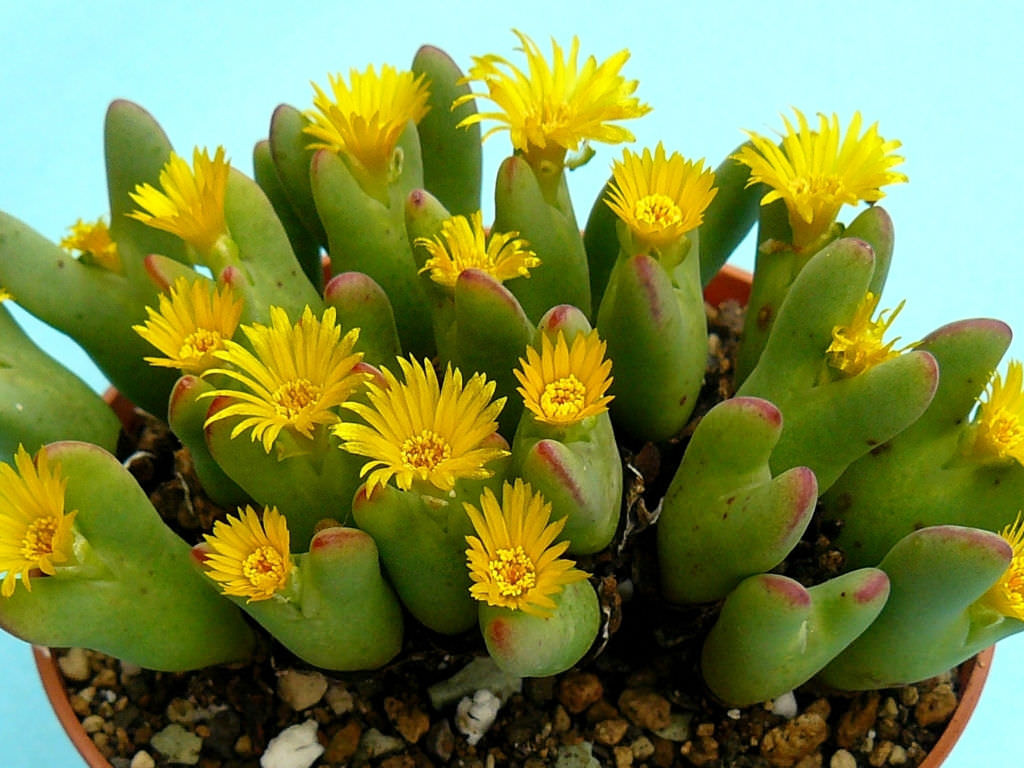 Conophytums are usually grown in containers where they spread slowly. These succulents are ideal for growers with limited growing space. Conophytums also do well in rock crevices.

Most Conophytums need bright light but do not like too much direct sunlight. To avoid sunburn, place them in a position to receive a few hours of full sun in cooler periods of the day. At the end of the dormant season, increase sun exposure gradually over several days to prevent shocking the plant. The plants stretch if they need more light.

Conophytums thrive best in porous soil mixes that allow water to drains away quickly. Use a commercial soil specially designed for growing succulents or make your own mix.

Hight temperatures are not a problem for Conophytums, but they can be damaged when the temperature goes below 32 °F (0 °C). If you live in colder areas of the world where winter temperatures drop below freezing, it is best to grow these plants in containers that can be brought indoors.

In habitat, Conophytums spread up to 2 feet (60 cm) in diameter, but in cultivation, they are usually grown in pots that are about 2 to 4 inches (5 to 10 cm) in diameter.

As with all Mesembs, Conophytums have specific growing and resting periods. They actively grow from fall to winter and go through a period of dormancy from spring to summer when the existing leaves dry up and protect the new pair of leaves in a papery sheath.

When Conophytums go dormant in the spring, they require little or no water. In the fall, when plants will begin growing, it is safe to water deeply, allowing the soil to dry before watering again. During active growth, if leaves start to wrinkle, your Conophytum needs water. Too much water can lead to root rot or produce a new pair of leaves at the wrong time of year.

Conophytums are light feeders, and they do not need fertilizer at all unless they are repotted every two years. It is best to feed at the beginning of the growth period and just before flowering. Use a fertilizer with low nitrogen levels diluted to half or even quarter strength.

Conophytums will benefit from repotting. They typically need to be repotted every 2 to 4 years, depending on the pot's size and growth rate. The best time to repot a Conophytum is at the beginning of the period of active growth, but repotting can be done at almost any time while the plants are actively growing.

How to Propagate Conophytum

Conophytums are easily propagated by division. They can also be grown from seeds.

It is possible to establish a new plant from a rooted pair of leaves, but it is recommended to divide mature Conophytums into clusters of 2 to 4 rooted pairs of leaves. Remove the plant from its pot, carefully cut through the roots and repot each cluster into its own pot. The best time to divide Conophytums is in late summer or early fall, before the plants begin to break dormancy, or after they have flowered.

Saw the seeds in fall in a pot with a well-drained soil mix and cover them with a very thin layer of fine sand. Place the pot in a sunny spot and keep the soil moist until seeds germinate. At temperatures between 65 and 70 °F (15 and 21 °C), germination usually takes a week or two. Reduce watering gradually as the seedlings grow.

Pests and Diseases of Conophytum

Once established Conophytums are relatively trouble-free, but a few pests and several diseases can sometimes occur.

Root mealybugs are one of the most common pests that can affect Conophytums. Alongside good regular care and a watchful eye, the best preventative measure is watering with a suitable insecticide once during the fall. Sometimes slugs, snails, and caterpillars start munching the plants. They are best hunted at night.

The most common plant diseases typically have little to no impact on Conophytum. To prevent botrytis, remove dead flowers and old sheaths after the new leaves have broken through.

Conophytums are non-toxic and safe to grow around children and pets.