Mesembryanthemums or Mesembs as they are often known, belong to the Aizoaceae family and come mainly from South Africa and Namibia. They occur in both summer and winter rainfall areas and this affects their cultivation needs.

Although the Aizoaceae family has roughly the same number of species as the Cactus family, and although the majority of them are found in a single country (and almost all of them in two countries), it manages a huge diversity of growth habits and climatic conditions. There are alpine summer growers, dead-stick summer dormant species, large shrubs, and single leaf pairs no bigger than your thumbnail. So knowing how to grow them can be something of a challenge.

Mesembs share a few common traits that will be found throughout the family. One is that all are leaf succulents with the frequent habit of recycling resources from older leaves to new growth. They are mostly adapted to relatively predictable rainfall patterns rather than extreme drought and irregular rainfall. Total rainfall may be extremely low, but water is available at least seasonally or through fog and condensation. This leads to or allows plants which are not especially large and sometimes very small, and affects the way they need to be treated in cultivation. 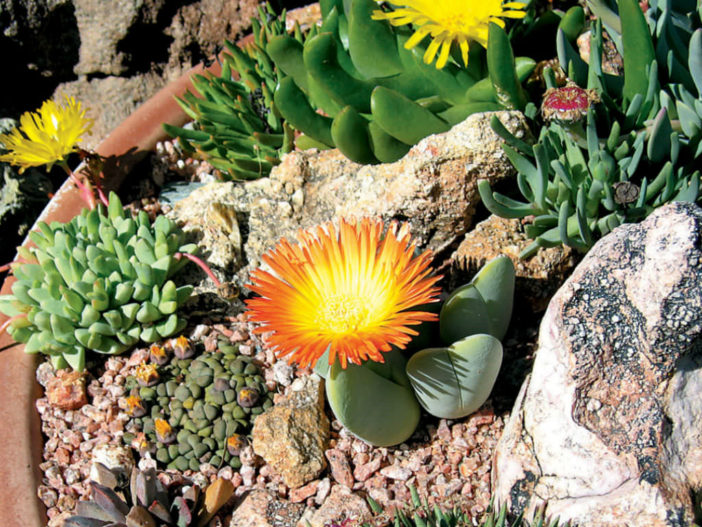 Mesembs require a loam-based compost with the addition of extra drainage material such as horticultural grit or perlite. They all like good light conditions and plenty of ventilation.

Some are relatively cold-hardy and can even survive mild winters outside. Most will survive temperatures down to a freezing point. There are some Mesembs which begin to grow in the autumn as the temperature drops and the days get shorter. Examples are Conophytum, Manilaria, and Mitrophyllum.

Because different genera within the Mesemb family have different growing conditions, special care must be taken when watering. Some genera will benefit from a light spray water to prevent shriveling during their dormant period.

The basics of Mesemb care are very simple, with free-draining soil, plenty of sun and ventilation, and regular light watering in the right season. Yet the difficulties are endless, trying to adapt to the Mesembs' own adaptability and to follow their growth habits in your particular conditions.