Old movies and television programs have made Barrel Cactus famous. For years, popular media touted the Barrel Cactus as a provider of life-saving water for lost and thirsty travelers. The story was based on the cactus' remarkably juicy interior that could be squeezed to release a distasteful fluid. Recent chemical evaluation of the liquid, however, indicates it is too alkaline to quench one's thirst. In truth, a person would be worse off after drinking it. The Seri Indians of Mexico's Sonoran Desert were aware of this fact and described how the liquid was not considered potable and caused headaches, diarrhea, and pain in the extremities if consumed.

The California Barrel Cactus (Ferocactus cylindraceus) was introduced to the scientific community by German-born botanist George Engelmann in 1853. He characterized the species as having a cylindrical shape, vertical rows of curved spines, and large yellow blossoms, often forming a circular crown on top of a single, swollen stem. (Most plants have one stem though occasionally multi-stemmed individuals are found. The condition is thought to be a result of rodents or other mammals gnawing the less well-armed base of the plant.) Providing a cactus does not succumb to multiple-years of drought, depredations of woodrats searching for moist food, or being carried away by a flash flood, a Barrel Cactus can survive for nearly a century. Such old plants may reach ten feet in height and may finally die when toppled by strong winds. 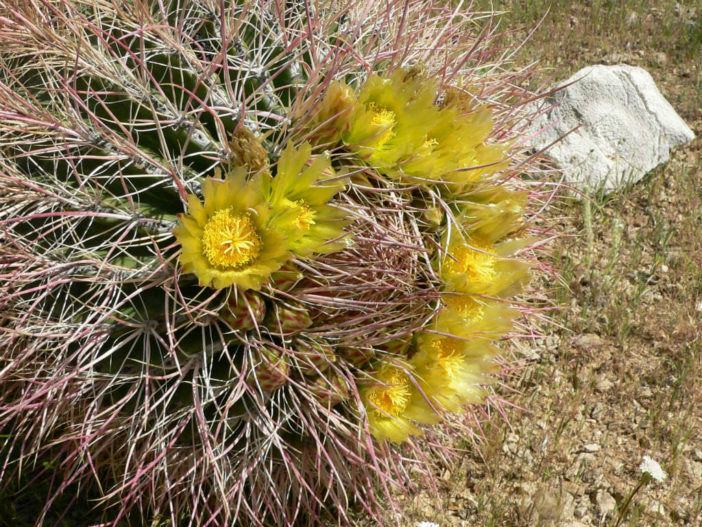 In historic times, all products of the plant's reproductive cycle were collected by Native Americans. In spring, Indian women collected buds and flowers. In summer, ripened fruits were harvested. In both seasons, reproductive parts were plucked from the top of cacti with sticks to avoid sharp spines. Buds, flowers, and fruits were parboiled to remove bitterness. After cooking, harvested parts were either eaten immediately or sun-dried and stored.

California Barrel Cacti are found on coarse-grained (well-drained) soils of hillsides, alluvial fans and bajadas in both the Sonoran and Mojave deserts of California. The species is particularly abundant on eastern slopes of the Peninsular Ranges and in the eastern Mojave Desert. Both locations are centered where summer rains are more likely than in other parts of the desert. The species has been discovered at elevations up to 5,000 feet on south-facing slopes.

In the Coachella Valley, the best places to view and photograph California Barrel Cacti include the Indian Canyons Tribal Park south of Palm Springs and Devil's Garden about 1.5 miles (2.4 km) northwest of Highway 62 on Mission Creek Road. At the latter location, park at the concrete berm and walk directly west.