Aeonium is a genus whose species are prized as some of the most ornamental succulents, with foliage that ranges from vivid chartreuse to nearly black, and that is solid-colored, banded, or striped. The 35 species have distinct sizes and colors, with hybridization expanding varieties into the thousands. Aeoniums are frost tender, preferring the mild Mediterranean climate of their native Canary Islands, but you will find Aeonium more tolerant of soil and moisture than desert natives.

Where it will grow: Hardy to 25 °F (-4 °C); USDA hardiness zones 9a to 11b
Water requirement: Low, but prefers more watering than most succulents
Light requirement: Full sun to partial shade (full sun in cooler climates)
Mature size: Varies with species
Benefits and tolerances: Soil tolerant; more tolerant of moisture than other succulents
Seasonal interest: Year-round; Aeonium are monocarpic, meaning they flower once, set seed, and then die
When to plant: It's best to plant cuttings in the fall; allow the stem end to become callous

Succulents are very ornamental, and Aeoniums are especially so. Lush, fleshy leaves are held in the typically tight rosette form, with edges often rounded out. While Aeoniums once were included in the Sempervivum genus, frost sensitivity and subtle differences led to a division.

Some species, like Aeonium canariense, produce offsets profusely while keeping low to the ground, like a mat. A. canariensis can burn if it gets prolonged sun exposure. They stay greener in bright to low light and can even tolerate a few hours of shade. 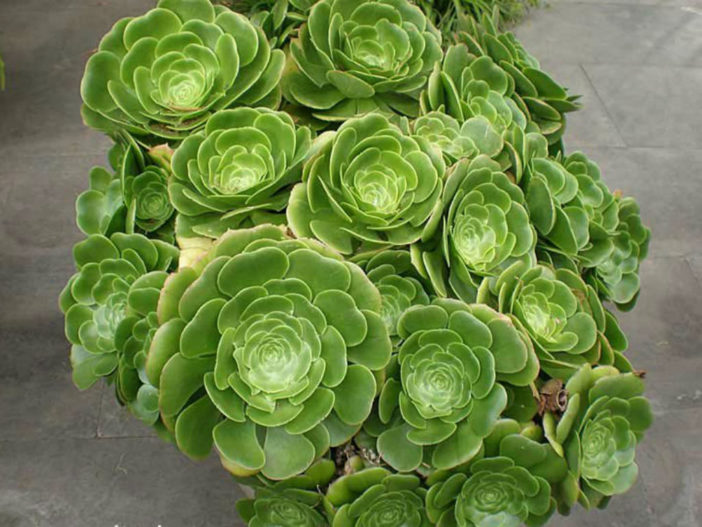 Others, like Aeonium arboreum 'Zwartkop' (or 'Schwartzkopf') grow on stalks to 3 or 4 feet (0.9 to 1.2 m) tall. A. arboreum 'Zwartkop' is prized for its near-black foliage. Sunlight deepens its color; dark purple foliage can fade to green over winter.

Plants can become leggy with age. To tidy up, cut the primary rosette off, allow the end to become calloused and replant. It will reroot, and the stem will sprout new growth as well.

Aeoniums are monocarpic, producing one flower stalk before dying. Most Aeoniums in cultivation are branching forms, meaning only one rosette will fade.

Aeoniums thrive in regions with wet winters and dry summers but can survive elsewhere. Shelter them from the sun in hot climates. Allow plenty of airflow and ventilation where there is more humidity. They are winter growers and may go into dormancy in summer, especially in extremely warm climates.

Aeoniums are more tolerant of moisture than other succulents, actually preferring the soil to remain a little moist. Prevent the soil from drying out completely but take care not to overwater. Aeoniums do well in most soils other than clay.