The genus Euphorbia is a huge one, with a bewildering array of forms including annuals and perennials, giant ones and tiny ones. Members of one unique and fascinating group are known as Medusoid Euphorbias because of their form.

Medusoid Euphorbias are easily identified. They have a central head sprouting numerous snake-like arms (branches), just like Medusa in Greek mythology. The arms may be stubby and widely spaced, or they may be long, snake-like, and closely spaced. For all of the Medusoid Euphorbias, the central thickened stem is equivalent to a caudex. It is the central storage region and can act as a reservoir for nutrients and moisture in times of stress. Many of the Medusoid Euphorbias will shed their arms during extended droughts, regrowing new ones when the rains return.

Medusoid Euphorbias come from a wide range of habitats, with Cape Province, South Africa being Medusoid Euphorbias central, but all go through extended periods of low moisture. Cultivation for many is relatively easy, as long as attention is paid to not watering during periods of dormancy. There are generally two periods of dormancy, a long one during the late fall and winter and a shorter one during the peak of the summer heat. The arrival of the summer one is harder to predict, and over-watering in late summer can result in root rot. 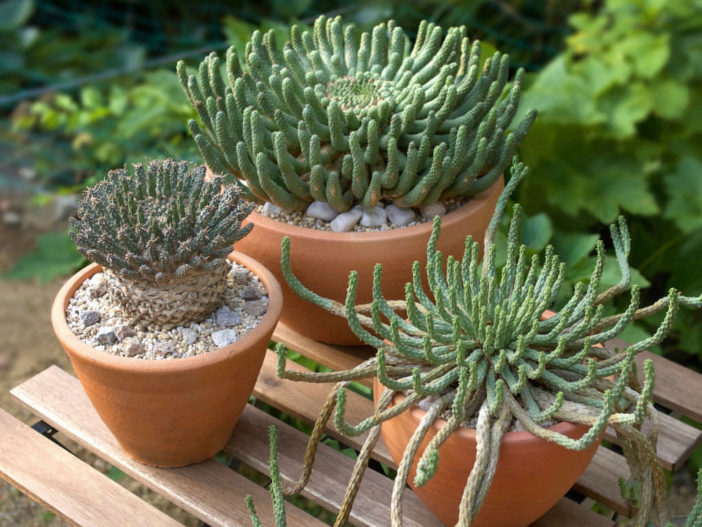 It's nearly impossible to find seed for most of the Medusoid Euphorbias. In general, the seed is short-lived. Vegetative propagation is easier. Most Medusoid Euphorbias can be propagated from arm cuttings, although an extended period will be required before the plant is worth showing.

Euphorbia arida is found in the Northern Cape and Free State and not that common. It forms a relatively tall caudex up to 1 foot (30 cm), covered with short, relatively thin arms.

Euphorbia caput-medusae is the classic species. It is from Cape Province, with a caudex of up to 8 inches (20 cm) in diameter. The branches are long and serpentine. It's the most snake-like of all the species.

Euphorbia crassipes pretty small species, native to the Karoo Region of South Africa, with thick, but short arms. The caudex is up to 6 inches (15 cm) in diameter.

Euphorbia decepta is from Cape Province, South Africa. The caudex is up to 4 inches (10 cm) thick, and the branches generally less than an inch (2.5 cm) long. In habitat, the branches are deciduous, but in cultivation, they stay on the plant all year.

Euphorbia esculenta is one of the most ornamental of the classic Medusoid Euphorbias with smooth, thick, pale-green arching arms. The caudex usually is mostly below ground, but in cultivation, most raise it for ornamental reasons. It is native to Cape Province.

Euphorbia flanaganii is one of the most common and easily grown of the Medusoid Euphorbias. The central caudex is generally 2 or 3 inches (5 or 7.5 cm) across. It grows quickly, offsets readily, and can rapidly fill a large bowl.

Euphorbia fortuita comes from Cape Province. It has a tuberous main root that merges into the main caudex, and stiff cylindrical branches usually about 4 inches (10 cm) long, but occasionally one will be twice as long.

Euphorbia fusca will produce secondary heads quickly. These can be removed to start new plants.

Euphorbia gamkensis is very rare and only occurs between Calitzdorp and Oudtshoorn in the Little Karoo. It has a large, more or less cylindrical underground caudex up to 2.4 inches (6 cm) in diameter.

Euphorbia gorgonis is another species from Cape Province. The caudex is mostly subterranean. It has short tuberculate branches that turn red in intense light.

Euphorbia inermis looks like Euphorbia esculenta, with numerous thick, closely spaced arms. The caudex is up to 20 inches (50 cm) in diameter, with many dozens of short arms arising from the sides.

Euphorbia procumbens, also know as Euphorbia pugniformis, is a dwarf spineless Medusoid Euphorbia that, in its normal form, has 2 to 3 rows of lateral shoots around the deepen tip of a swollen succulent base. It is closely related to Euphorbia gorgonis and can be confused with Euphorbia flanaganii, but it is smaller.