Pereskiopsis is the genus name of the family Cactaceae that have characteristics, unlike many other cacti. Their name comes from there likeness to the genus Pereskia, also untypical looking cacti with leaves. The species Pereskiopsis spathulata is the most commonly encountered and used by cacti horticulturalists. Pereskiopsis cacti contain glochids and areoles similar to the Opuntia genus.

They often have tropical features unlike many other cacti with their affection towards regular watering and humidity. They are often found throughout South America in a variety of ecosystems, not exclusive to deserts. However, several species are noted to be in Central America, including Mexico. Yet their presence is quite rare in these instances. Research suggests that they are a highly primitive form of cacti and may give horticulturalists and botanists clues as to what cacti originally looked like before subsequent evolution.

Pereskiopsis are often grown by cuttings. Seeds are very rare in the wild and are unheard of in cultivation. Getting Pereskiopsis to flower is also quite rare with no clear cut techniques in pollination. Cuttings are taken from plants that are mature but not too woody. Woody plants become far too tough and dangerous to work with. The glochids can also become a real pain if not handled properly. These little cacti spines will lodge into your skin and become a real irritant all day! Keep a pair of long tweezers to hold the Pereskiopsis cuttings and plants, but also a small precision pair for removing the glochids. 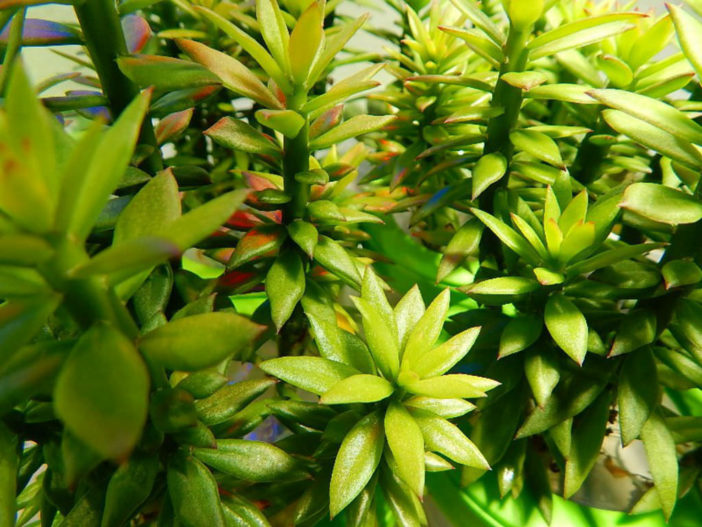 Soil: Unlike most other cacti, Pereskiopsis will put up with a lot of organic material in their soil. Although you should not use a rain forest mix, you can and should have a soil mix that is a little more than 75% organic soil. We do this because, unlike most other cacti, Pereskiopsis are heavy feeders. They grow far more quickly thanks to their leaves, and their roots are far more reaching. The other 25% should consist of an even mix of perlite, pumice, rock, and sand. All of these four provide excellent drainage oxygen flow in the soil. Root rot is common in Pereskiopsis but is easily avoided by adding these.

Light: As with just about every cactus, a lack of light will harm them if you expect growth and continue to water them. You will wait for a long time if you do not have an artificial light source and humidity. Pereskiopsis live in very tropical, wet, and humid regions of Central and South America. This is easy to recreate with your grow light and indoor greenhouse set up. But you must be careful to allow air circulation. This is one of the number one killers of cactus and Pereskiopsis in general behind overwatering. If you have an indoor greenhouse, you can easily do this by opening up the tent for several hours a day and choosing one day a week in which it is open all day. You should have two angles for air circulation to navigate. No artificial fans are needed but can be helpful.

Lighting requirements for Pereskiopsis plants are about 10-14 hours of light a day. Find a balance that fits your lifestyle and that of the plants. If they react negatively toward your specifications, make the appropriate changes.

If you are just growing them during the summer, most northern states and even portions of Canada can maintain Pereskiopsis outside. The months of June, July, and August will be perfect for Pereskiopsis in clay pots. Do not bother watering them and just let the rain take care of them. If you are in the western states, which are much drier, water them when the soil becomes dry. Believe it or not, these cacti will be tolerant of regular potting soil in a sunny and warm location with good air circulation.

Water: Unlike most other cacti, Pereskiopsis has the unique property of wanting more water. Don't make the common mistake, though, and most cacti would prefer if you watered them more. However, the soil, heat, and light that you have are probably not enough to accommodate them. Even in their natural habitat, cacti would prefer more water than they receive.

Growing Pereskiopsis is not difficult at all. In fact, the plant is quite tolerant of many mistakes you might throw at it, but there are some considerations you must take before planting your new grafting stock. Depending on the number you have and how you will want to display them will dictate how they are planted. Another consideration is whether you received them as cuttings or as fully rooted plants. A tray that does not separate the different plants is perfectly acceptable. However, to make grafting easier as well as future cuts, it's best to use a cell that separates the plants, one per cell. This will also make it easy to separate them when you are ready because the roots are very aggressive and will branch out.