The Mammillaria genus is generally found in the southwest United States and Mexico, with some spread into the Caribbean. This huge genus of plants contains at least 275 species of highly variable form, and thus are highly prized among collectors. Mammillarias are common cacti at shows, as well as ordinary garden centers, both for their appearance and their desirable traits in cultivation. Although this genus does include some very difficult plants to maintain, the most common ones are usually very easy and will stay small enough and grow slow enough to provide years of enjoyment.

When they do flower, many species flower with a "crown" of flowers that surround the top of the plant like a wreath.

Light: Mammillaria species appreciate intense light, but many species dislike more than four hours of direct summer sunlight. Provide bright, even light for the best results.
Water: Allow the soil mix to become nearly dry between waterings, but then water thoroughly. Immaculate drainage is essential, so never let the pots sit in water. Suspend watering in the winter, but mist occasionally.
Soil: A rich, fast-draining cactus mix is ideal.
Fertilizer: During the growing season, fertilize with a cacti fertilizer mix. Suspend feeding during the dormant winter period. 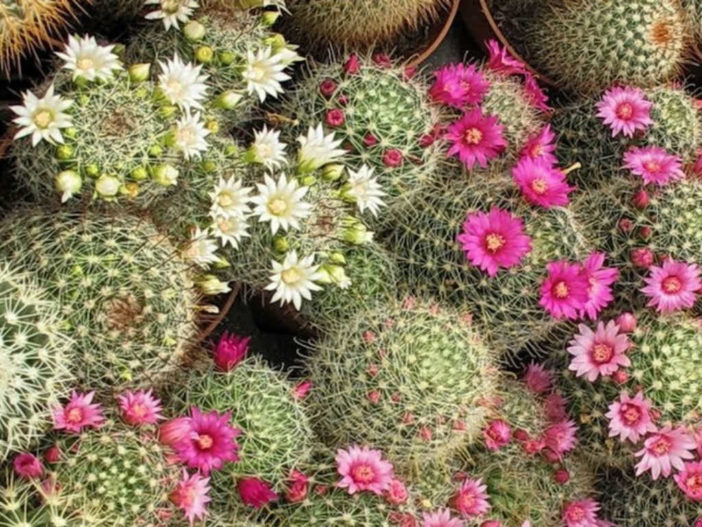 Mammillaria cacti can be propagated easily from offsets, which readily form in clusters around the base of the mother plant. To propagate, carefully remove the offset and allow the cut to dry on a paper towel for a few days. Depending on the size of the cut area, a callous will form over the cut surface.

Once the callous has formed, place the new plant in a pot with a potting soil mixture and keep in a warm place until new roots emerge. Once the plant is established, repot it into a regular container.

Repot as needed, preferably during the warm season. To repot cacti, make sure the soil is dry before repotting, then gently remove the pot. Knock away the old soil from the roots, making sure to remove any rotted or dead roots in the process. Treat any cuts with a fungicide. Place the plant in its new pot and backfill with potting soil, spreading the roots out as you repot. Leave the plant dry for a week or so, then begin to water lightly to reduce the risk of root rot.

If you can grow cacti and succulents successfully, you can likely grow the popular Mammillaria without too much trouble. To encourage better flowering, allow the plants to enjoy a cooling period in the winter and suspend watering. Unlike many other cacti, which use their ribs as storage devices, the Mammillaria feature raised tubercles, from which spines emerge. When you water, the tubercles will expand to allow for increased water storage. The flowers emerge from the axils of these tubercles on the previous year's growth, which accounts for their interesting halo effect. The cactus mustn't be exposed to prolonged dampness and sitting water. Never let your cactus sit in a dish of water. Lastly, make sure to fertilizer during the growing season for the best results.