Monsonia is a genus of plants in the family Geraniaceae and covers all 14 species of the former genus Sarcocaulon. It is named after Lady Anne Monson, known for her botanical knowledge and plant collecting in the Cape. Monsonia consists of herbs or undershrubs, often with simple stems from woody rootstock or deep taproot.

Species are distributed in Africa, western Asia, and East India. They occur in regions where dry climatic conditions prevail and are found on rocky hillsides or mountainsides, gravel, outcrops of weathered quartzite, and red dune sands.

Members of the family Geraniaceae have long been widely cultivated for their horticultural value. Members of Monsonia are much sought after by succulent lovers. The fleshy branches, covered with wax, are flammable and, even when wet, can be used as kindling to light fires.

Monsonia species are generally easy to cultivate. Except for Monsonia camdeboensis and Monsonia vanderietiae, they rarely produce an extensive new root system once transplanted. Transplanted specimens flower sporadically in cultivation but survive for many years. 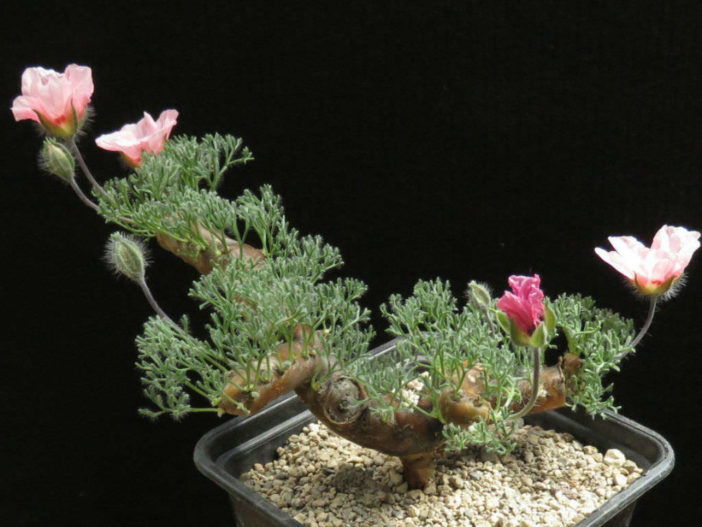 Seed-grown plants, in contrast, thrive and flower prolifically in cultivation. The ideal cultivation medium for most species is silt collected from the sides of road culverts, to which a small amount of bone meal and some ordinary, sandy garden soil has been added. Seeds should be sown just under the surface of the soil in large seed trays. They should be planted out into individual containers when they are about two years old.

All Monsonia species require direct sunlight when in full growth. Seedlings need to be regularly watered while they are in active growth and occasionally during dormancy.

Monsonia salmoniflora has a good deal of potential for the landscaping trade. The species is easily and relatively quickly grown from seed and long-lived.