Manfreda is a genus of flowering plants in the family Asparagaceae. Some authorities place Manfreda in genus Polianthes, while others group place both genera in Agave. The generic name honors 14th-century Italian writer Manfredus de Monte Imperiale.

There are 28 species of Manfreda, distributed from South-eastern and South Texas, Eastern Mexico and Guatemala. These succulent plants are small and stemless or with a short stem. The fleshy leaves form a loose rosette. Leaf edges are smooth or have very small teeth and there are no terminal spines. The relatively tall inflorescence carries fragrant tubular flowers.

The Spotted Manfreda, also called Texas Tuberose (Manfreda maculosa) is notable for having silvery-green leaves covered with purple spots and is a popular xeriscape plant in the Southwest United States.

Manfreda species contain saponins that were used as detergents and were traditionally used as remedies against snake bite. While efficacy against snakebite is doubtful, it is just about possible that the soapy content could help to inactivate the toxic enzymes in some snake venoms. 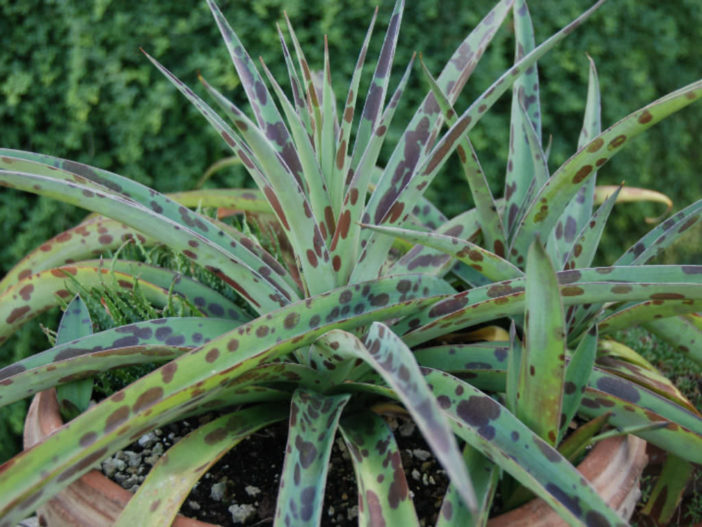 Manfreda is a tender perennial or "temperennial" succulent plant that grows best in full sun. Plant in well-drained, dry to average soil in containers just slightly wider than the width of the rosette or plant directly in the ground. Since the plant has a rather large root system, the container should be at least 12 inches (30 cm) deep. Manfreda is a slower grower, so it will not quickly overtake the space it is allotted in the landscape.

In summer when the plants are actively growing, they appreciate a bit of supplemental watering and half-strength fertilizer. During the winter months, the plants should be allowed to dry and should be stored in a cold room at 48°F (9° C). Plants are watered only enough to keep the foliage from shriveling.