Lampranthus is a fairly large genus with 100 to 150 species coming from South Africa. It provides some of the most spectacular displays of bright flowers from the succulent world and is widely used as ground cover, either annual or perennial as the climate allows. Several species are used for landscaping and vary from shrubby to trailing. All the species tend to become woody as they age.

The genus name "Lampranthus" means "shining-flowers" in Latin and the species of this genus have large, extremely bright flowers of a range of colors (sometimes even bi-colored) that usually appear in summer and frequently cover the plants entirely. The species of this genus typically have long, smooth, elongated, succulent leaves. These can be triangular or cylindrical and appear in opposite pairs on the shrubs' branches.

The spectacular flowers need full sun to open. As most mesemb, they are followed by woody capsules that open when wet, to insure propagation of the seeds at the best possible time. 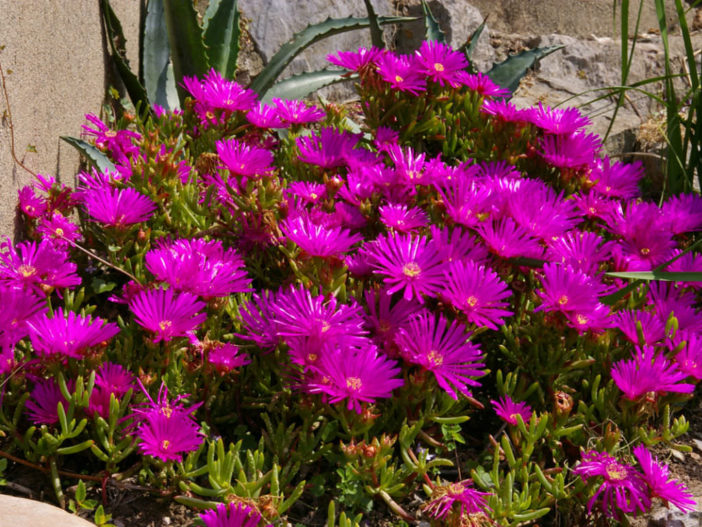 Lampranthus are generally hardy in USDA plant hardiness zones 8 through 11, but this varies depending on the species. They thrive in well-drained, poor soils and are suitable for soils with a sandy or rocky texture, although they will grow in almost any soil type. These plants tolerate exposure to salt and grow in coastal conditions.

Plant rooted cuttings in spring after the possibility of frost has passed. Space the cuttings 6 to 24 inches (15 to 60 cm) apart for trailing species, using closer spacing for quicker coverage. Dig a hole just a little larger than the roots at the cutting's base. Put the roots in the hole, cover them with soil and tamp the soil firmly in place. For erect or mounding species, space them according to the mature dimensions for the particular species.

Water the plants immediately after planting, but then let the top inch (2.5 cm) of soil dry before watering again. Water your plants in this manner through the first spring and summer they are in place. They are drought-tolerant once established, when they will need watering only during extended dry periods.

Lampranthus need full sun to keep the growth from becoming leggy and for best flowering. They don't need fertilizing, as that causes overgrowth of softer, weaker branches. After plants flower, prune off the old flowers and any developing fruits. Lampranthus are short-lived perennials and may need replacement after several years.

For container plants, use a succulent potting mix. Containers need watering throughout the year whenever the top layer of soil dries out. Plants can grow almost year-round in mild climates. Prune as needed any time of year to keep the plant to size. Bring containers indoors before the first frost is predicted.

The propagation is by seed or cuttings. Seeds need warmth to germinate, 60 °F (16 °C) or more is suggested. Cuttings should be taken in summer. 6 inch (15 cm) shoot stripped of their bottom leaves and planted in moist sand should rapidly root.