You are at:Home »Cultivation »How to Grow and Care for a Baboon's Cucumber (Kedrostis africana)

Kedrostis africana, commonly known as Baboon's Cucumber, a monoecious, caudiciform plant native to Namibia and South Africa. It forms a large caudex with annual stems. The leaves are roughly triangular but have several lobes, creating a beautiful foliage. It flowers unfailingly every year in summer. The male flowers are green-yellow to whitish or cream. The female flowers are solitary or few in fascicles, green-yellow to whitish or cream.

Baboon's Cucumber tuber is widely used in traditional medicine as an emetic, purgative, diuretic, anti-dropsy and to treat syphilis. Also, a decoction from the crushed fresh bulb is taken twice daily for the management of obesity.

Baboon's Cucumber is monoecious (with separate male and female flowers but on the same plant) and is often self-fertile so the showy, orange fruits are readily formed. It can be grown from seed in most areas, as long as the young plants are protected against drought, severe frost and too much sunlight. 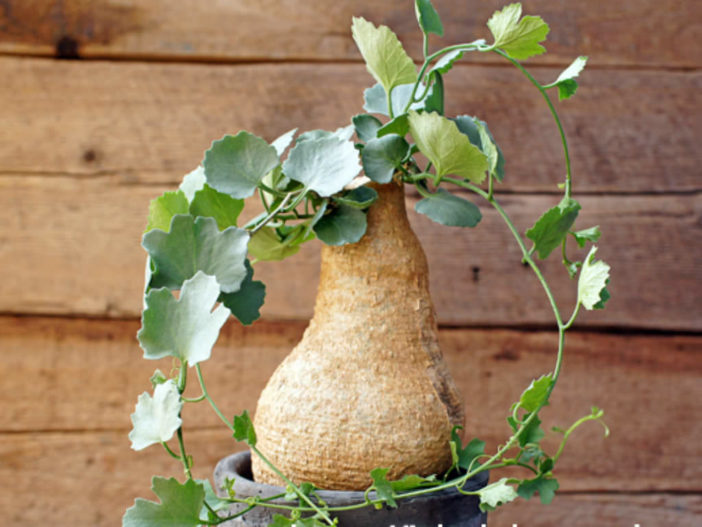 As a climber, the stems will need some support to give a showy effect. Baboon's Cucumber prefers well-drained soil, lots of water in the growing-period and some sun. It grows very slow, but it possible to increase the speed of growth by providing adequate amount of water, warmth and fertilizer during the active growing season.

Baboon's Cucumber likes a sunny position, but avoid direct blasting sun in summer. Water regularly during the summer. Avoid watering in the fall or winter. It is susceptible to rot if too wet.

This is one of the hardiest of caudiciforms, tolerating winter rain and several degrees of frost. It can be grown outdoors in frost-free climates, need anyway to kept above 32 °F (0 °C) and dry in winter.