The giant Baobab, a symbol of life on the African plains, belongs to the genus Adansonia, a group of trees consisting of 9 different species. Only 2 species, Adansonia digitata and Adansionia kilima, are native to the African mainland, while 6 of their relatives are found in Madagascar and one in Australia. Although the Baobab's genus is small, the tree itself is quite the opposite.

This is the monster of the African bush, a vast fleshy giant that looms over the Acacia shrubland waving its Medusa-like branches above a bulbous body.

It may not be as tall as the coast redwood, but its vast bulk makes it a strong contender for the world's largest tree. Adansonia digitata can reach 82 feet (25 m) in height, and 46 feet (14 m) in diameter.

Baobabs are often referred to as upside-down trees, thanks to the root-like appearance of their tangled branches. They are found throughout the African continent, although their range is limited by their preference for drier, less tropical climates. They have been introduced overseas as well, and can now be found in countries like India, China and Oman. Baobabs are now known to exceed 1,500 years of age.

The widest Baobab (Adansonia digitata) in existence is thought to be the Sunland Baobab, located in Modjadjiskloof, Limpopo Province. This breathtaking specimen boasts a height of 62 feet (19 m), and a diameter of 34.9 feet (10.6 m). At its widest point, the Sunland Baobab's trunk has a circumference of 109.5 feet (33.4 m). 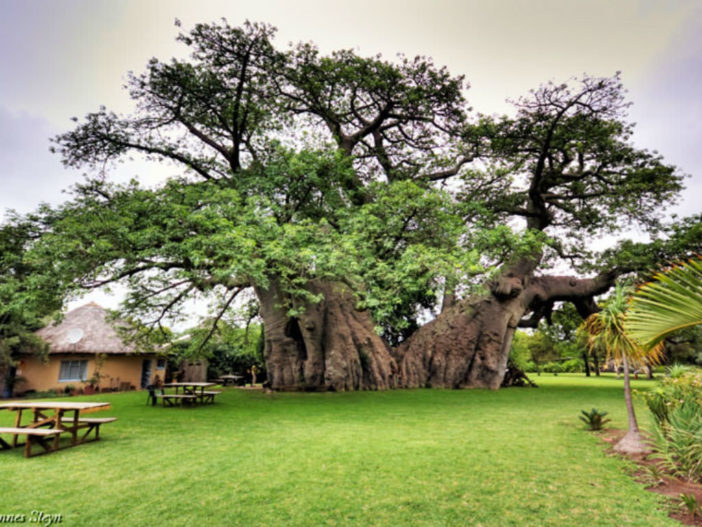 The tree has had plenty of time to reach its record-breaking width, with carbon-dating giving it an approximate age of around 1,700 years. After reaching 1,000 years, Baobabs start to become hollow inside, and the owners of the Sunland Baobab have made the most of this natural feature by creating a bar and wine cellar in its interior.

The Tree of Life

The Baobab has many useful properties, which explains why it is widely known as the Tree of Life. It behaves like a giant succulent and up to 80% of the trunk is water. San bushmen used to rely on the trees as a valuable source of water when the rains failed and the rivers dried. A single tree can hold up to 1,189 gallons (4,500 l), while the hollow center of an old tree can also provide valuable shelter.

The bark and flesh are soft, fibrous and fire-resistant and can be used to weave rope and cloth. Baobab products are also used to make soap, rubber and glue; while the bark and leaves are used in traditional medicine. The Baobab is a life-giver for African wildlife, too, often creating its very own ecosystem. It provides food and shelter for a myriad of species, from the tiniest insect to the mighty African elephant.

Baobab fruit resembles a velvet-covered, oblong gourd and is filled with big black seeds surrounded by tart, slightly powdery pulp. Native Africans often refer to the baobab as the Monkey-bread-tree, and have known about the health benefits of eating its fruit and leaves for centuries. Young leaves can be cooked and eaten as an alternative to spinach, while the fruit pulp is often soaked, then blended into a drink.

Recently, the Western world has hailed the Baobab fruit as the ultimate superfruit, thanks to its high levels of calcium, iron, potassium and Vitamin C. Some reports state that the fruit's pulp has almost 10 times the amount of Vitamin C as the equivalent serving of fresh oranges. It has 50% more calcium than spinach, and is recommended for skin elasticity, weight loss and improved cardiovascular health.

There are many stories and traditions surrounding the Baobab. Along the Zambezi River, many tribes believe that the Baobab once grew upright, but it considered itself so much better than the lesser trees around it that eventually the gods decided to teach the baobab a lesson. They uprooted it and planted it upside down, in order to stop its boasting and teach the tree humility.

In other areas, specific trees have stories attached to them. Zambia's Kafue National Park is home to a particularly large specimen, which the locals know as Kondanamwali (the tree that eats maidens). According to legend, the tree fell in love with 4 local girls, who shunned the tree and sought human husbands instead. In revenge, the tree pulled the maidens in to its interior and kept them there forever.

Elsewhere, it is believed that washing a young boy in a tree where baobab bark is soaked will help him to grow strong and tall; while others hold the tradition that women living in a Baobab area are likely to be more fertile than those living in an area with no Baobabs. In many places, the enduring giant trees are recognised as a symbol of community, and a place of gathering.

The Order of the Baobab is a South African civilian national honor, instituted in 2002. It is awarded annually by the South African president to citizens for distinguished service in the fields of business and the economy; science, medicine, and technological innovation; or community service. It was named in recognition of the Baobab's endurance, and its cultural and environmental importance.