A Golden Barrel Cactus (Echinocactus grusonii) doesn't really need to bloom to have a commanding presence in the garden. The symmetrically rounded stem is armored down the ridges with clusters of golden yellow spines. A wooly white patch tops older cacti. This is the central growing point and bears the small, yellow flowers. Growing in U.S. Department of Agriculture plant hardiness zones 8 through 11, these long-lived, slow-growing cacti can reach 3 feet across and 4 feet high. They are suitable for container plants anywhere.

The life cycle of the Golden Barrel starts with the flower, which needs to be pollinated to produce seeds. Yellow funnel-shaped flowers grow in a ring in the central felted portion. Plants have to be at least 14 inches across before they are old enough to flower. Sometimes the flowers are self-fertile, but you get more seeds when flowers cross-pollinate with those on another Golden Barrel. Bees are the usual pollinators. Once flowers are pollinated, they close, and seeds begin to form in the ovary beneath the faded flower.

The fruits are embedded within the dense plant hairs on the top of the plant, and they remain in place year after year unless you pull them out. Sometimes ground squirrels harvest them to eat the seeds. The dried flower stays on top of the fruit. The fresh fruit has a yellowish fleshy wall that dries to brown. The oval black seeds inside the fruit remain viable for a long time. To collect the seeds, gently remove the fruit by grasping the dried flower and slightly twisting it as you pull. It's best to take fruits to a work table to break them open and remove the seeds. 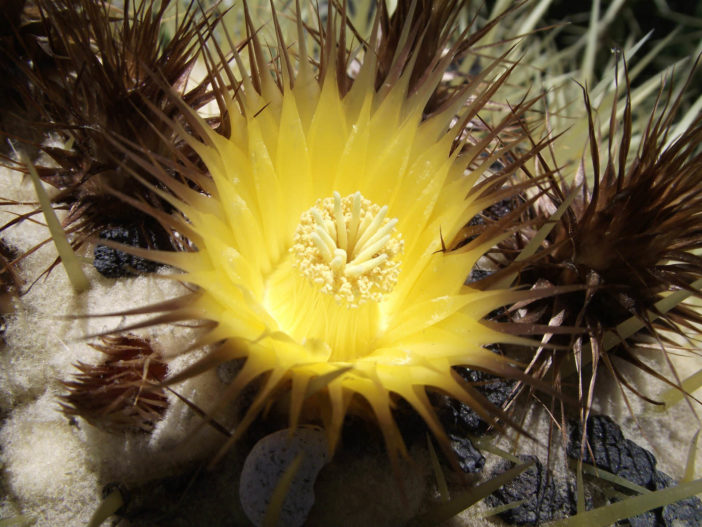 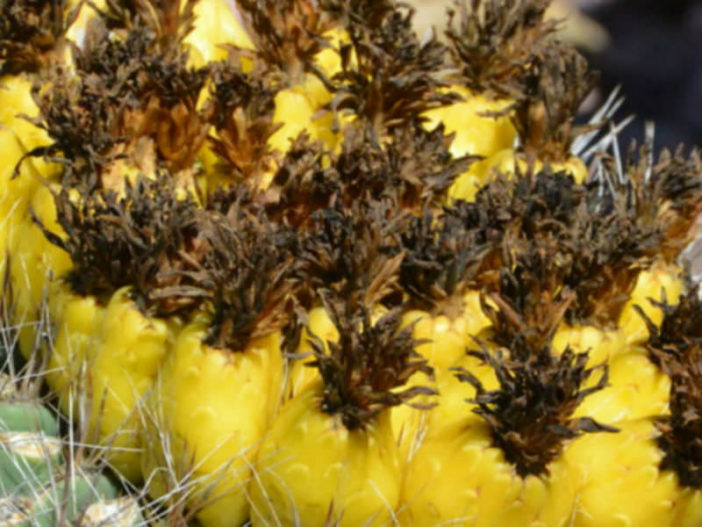 Seeds germinate during warm, moist conditions and need light to sprout. To plant the seeds, use a clean, shallow pot with drainage holes and a soil-less growing mix like half peat and half perlite. After filling the pot within an inch of the top with the potting mix, scatter some chicken grit on top and then evenly distribute the seeds, so they lodge among the grit. Water the pot from the bottom by temporarily putting it in a water tray, so the mix is thoroughly wet. Cover the pot with plastic and place it in bright indirect light, keeping the soil moist but not soggy.

Pudgy little seedlings emerge from the seeds after four to six weeks. They look like miniature greenish-pink pencil erasers with a pair of pointed corners, which are the cotyledons or seed leaves. As the seedlings grow, a puff of tiny spines develops on a bump between the cotyledons. Gradually remove the plastic after the seeds have germinated. Allow them to grow until they are big enough to touch each other and have a small crown of spines when you can transfer them in small clumps of four to six plants to individual 2-inch pots. Being in clumps helps to keep them from being overwatered. 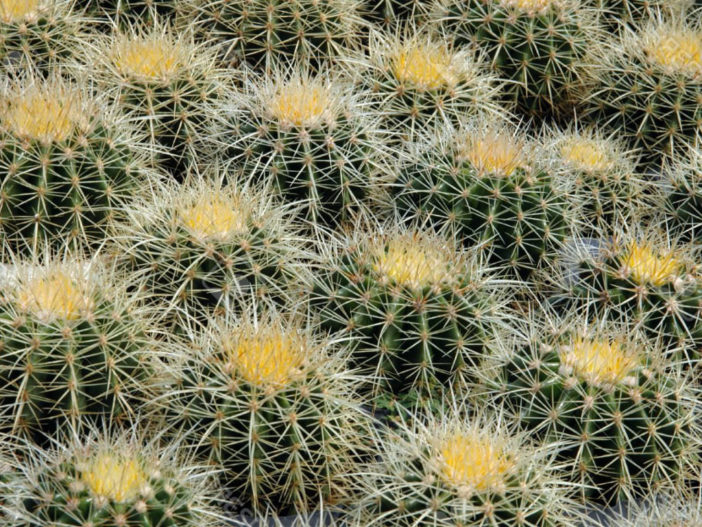 As the seedlings grow, they begin to look more like cacti. Plants have little bumps with a cluster of small spines atop each bump, more properly called tubercles, that eventually join together to form the ridges on the cactus. When your seedlings fill the pot, unpot them, separate them and give each one its own 2-inch pot. Each time they grow to touch the sides of the pot, transplant them to just the next pot size and gradually give them partial sunlight. When cacti are 6 inches wide, they can be gradually accustomed to garden conditions and planted outdoors. After about 15 years, the plant becomes large enough to flower, and the cycle repeats itself.

5.0K shares
Previous ArticleHow to Grow and Care for Echinocactus
Next Article Ceropegia linearis (String of Needles)
Add A Comment