Ortegocactus is a cactus genus that consists of only one species that was discovered relatively recently in the second half of the 20th century. It grows in a very small area on limestone in Oaxaca, Mexico. Ortegocactus macdougallii is the only species, and an exceedingly rare greenish grey clumper. Though its now showing up in cultivation. The 1 to 1.5 inches (2.5 to 3.8 cm) heads offset profusely and these offsets can be used for propagation along with seeds. The plant is self fertile and only one is needed to produce fruits and seeds. The flowers come in spring or summer and are yellow.

An interesting characteristic of this plant is the beautiful gray-green dermis, which is notably porous and has a skin-like appearance. Like so many of the small species of Mexican cacti, Ortegocactus is highly prized by collectors. However, as these plants age, they tend to develop rust-colored spots on them even in the care of the most accomplished growers.

Ortegocactus macdougallii likes light shade to full sun. It is often grafted since it is tricky to grow when on its own roots. Water moderately in summer and very carefully if at all in winter. It show a distinct intolerance to over watering either by rotting off, or by bursting of the epidermis. Grow Ortegocactus in a fast draining mineral mix. To prevent growing a monster totally out of proportion to their attractive and natural form, you should limit the fertilizer. 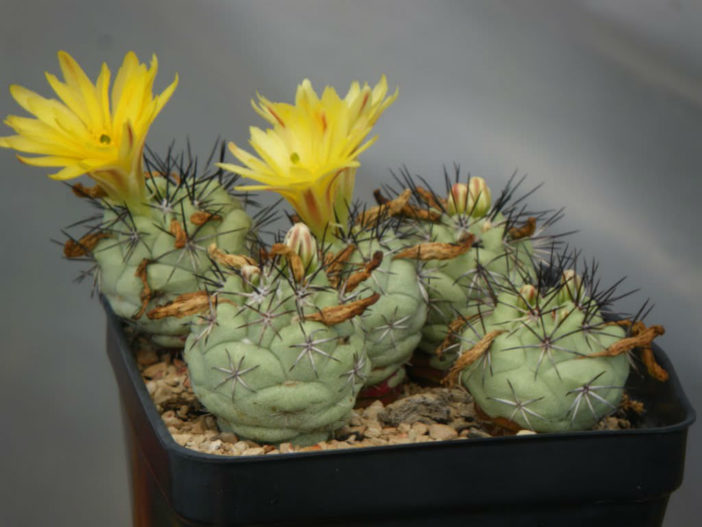 Very slow from seed. Many authors recommend grafting, first on Pereskiopsis and soon on Myrtillocactus geometrizans. If it does not reject the stock, it is possible to be cultivated without problems. If we prefer to cultivate it on its own roots, we can maintain intact its characteristics without deformities, grafted plants clump readily and the offsets can be used for make cuttings.