Gasteria is named for the sac-like shape of its flowers, which are supposed to resemble a stomach. The species are native to South Africa, where they grow in lightly shaded conditions with excellent drainage. As a result, they are adapted to relatively lower light conditions than some more well-known succulents, and they are good houseplants. Depending on the species, leaves are often marked with interesting patterns and coloration.

Light: Bright light, but not direct sunlight. These grow in similar conditions to Haworthia succulents. White or yellow leaves usually signify too much sun.
Water: Water evenly and generously in the summer, letting the soil media dry out between waterings. In the winter, reduce watering to every other month, but do not stop watering. Never allow water to collect in between the leaves.
Temperature: Warmer summers but cool in the winter, down to 50 ˚F (10 ˚C). During warmer weather, your Gasteria leaves might turn a lighter, brighter color, or the plant might flower with small, colorful sac-shaped flowers.
Soil: Use a cactus mix or very fast-draining potting soil mixed with sand.
Fertilizer: Fertilize during the summer growing season with a cactus fertilizer. Don't feed during the winter. 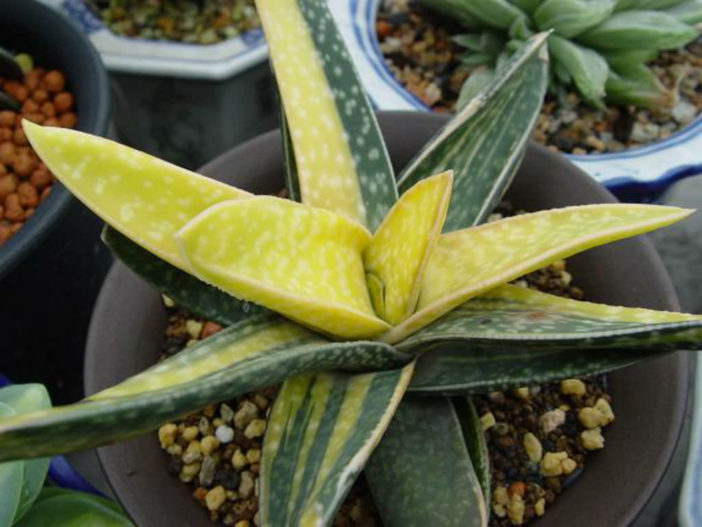 Gasteria can be propagated at repotting time using offsets from the mother plant or leaf cuttings, depending on the species.

When taking offsets, use a sharp knife or snippers and cut as close to the mother stem as possible to include as many roots as possible and then allow the offset to dry briefly before repotting it (similar to cuttings from other succulents). Pot the offsets in a small pot, use the same soil as the mother plant, and put it in a warm, bright spot and adequately water.

Gasterias are small, shallow-rooted, and relatively slow-growing. They are often grown in small clusters in wide, shallow dishes. Over time, clusters will naturally enlarge as the mother plant sends off small plantlets. When the cluster has outgrown its container, repot in the spring or early summer into a new wide and shallow dish with fresh potting soil. This is also the time to take offsets for propagation.

Gasterias are often grouped with Haworthia because they have similar cultural requirements. Both are attractive, small succulents that can tolerate somewhat more shade than many succulents, making them more suitable as houseplants. These succulents are susceptible to fungal infections, which usually appear as black spots on the leaves. These are the result of too much humidity or water on the leaves, but they should not spread too quickly. Gasteria plants have a natural defense mechanism against such fungal attacks and attack the invading organism and seal off the wounded spot. In general, any place where Haworthia and Aloe thrive will be hospitable to a Gasteria.