Polycarpaea nivea, also known as Common White Saladillo, is a species of plant that belongs to the Caryophyllaceae family. The species was described by William Aiton in 1828 as Achyranthes nivea, later it was placed under Polycarpaea by Philip Barker Webb around 1840. The specific name "nivea" comes from the Latin that means white like the snow, alluding to the color of the plant.

It is a woody, dense, cushion forming, subshrub. The leaves are small, strongly succulent, silvery or more rarely brownish tomentose with acute to rounded apices.

The species are founded in dunes and rocks in Mauritania, Morocco, the Canary Islands and Cape Verde.

Polycarpaea nivea is a coastal xerophyte, growing in extremely arid to arid areas of several islands, typically on more or less compacted sand dunes close to the sea but also in coastal cliffs and stony coastal plains. It is also found in sub-humid to humid mountain areas. In the Canary Islands it forms psammophyte communities with Convolvulus caput-medusae and Heliotropium bacciferum ssp. erosum, Zygophyllum fontanesii (Tetraena fontanesii) and Euphorbia paralias. 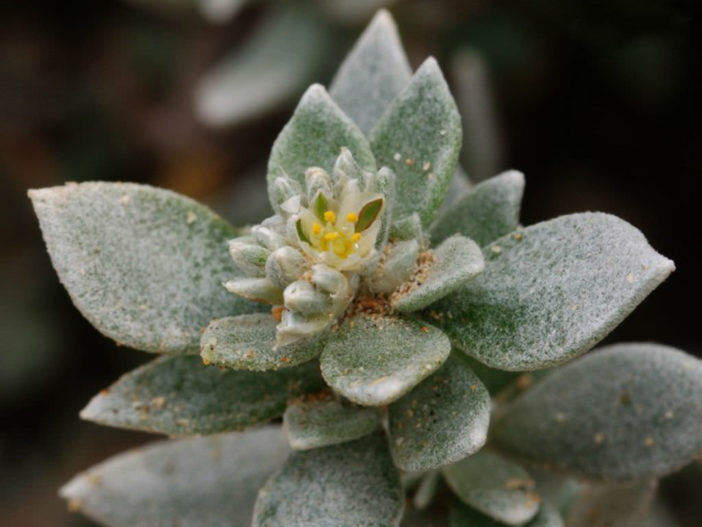 It is a low-growing, grey hairy plant seldom seen in cultivation. It has been used extensively and successfully in the sand-binding experiments on the sand dunes.