Pelargonium is a genus of flowering plants native to southern Africa and Australia, which includes about 200 species, commonly known as Geraniums (in the United States also Storksbills). Confusingly, Geranium is the botanical name (and also common name) of a separate genus of related plants often called Cranesbills. Both genera belong to the family Geraniaceae. Linnaeus originally included all the species in one genus, Geranium, and they were later separated into two genera by Charles L'Héritier in 1789.

Pelargonium occurs in a large number of growth forms, including herbaceous annuals, shrubs, subshrubs, stem succulents and geophytes. The erect stems bear five-petaled flowers in umbel-like clusters, which are occasionally branched. Leaves are usually alternate, and palmately lobed or pinnate, often on long stalks, and sometimes with light or dark patterns.

Some species are true succulents with water- storage tissues in the steams, a few species even appear to have succulent leaves, some are underground geophytes. 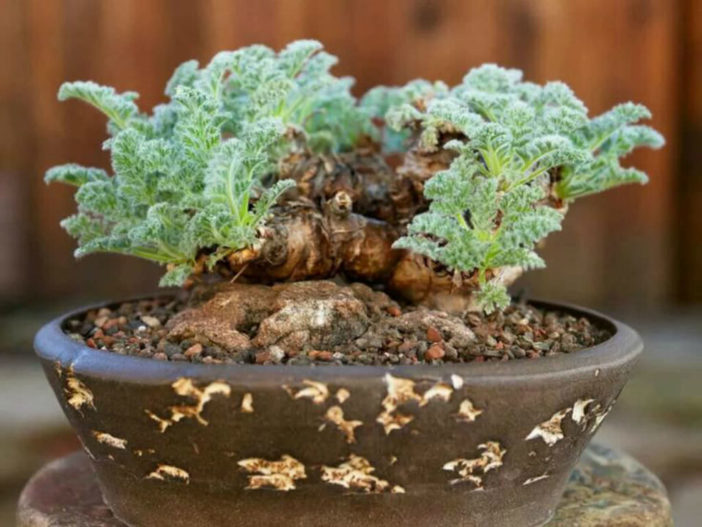 Most Pelargoniums are grown in pots in a green house or conservatory. They can also be grown inside the house, but need to be in the most sunniest area possible.

Many species do well when they are planted outside in an open area, so that they can become larger plants. This can be a problem though if you want to replant them in a pot for the winter months. Cuttings can be taken in the summer time instead to make new plants.

Succulent species grow well with other succulents and cacti. Pelargonium are very attractive and one of the toughest and most durable succulents.

Pelargoniums main requirement is a warm, sunny, sheltered location. Many species will tolerate drought conditions for short periods. They will show you when they wants water by producing a crop of new leaves, almost all species are winter growers. After the summer you can wait until the plant begins to grow, but you can also give them lights spryings or shower to stimulate their growth, when they are in full leaves they like water, but as always keep the soil dry out between waterings. Overwatering can cause unnatural growth.

Pelargoniums are easy to propagate vegetatively from cuttings.