Dyckia is a genus of plants in the family Bromeliaceae. There are 120 different species with many more cultivars. Most species are native to Brazil, but a few originate from other South American countries such as Uruguay, Paraguay, and Bolivia.

The genus was introduced into Europe during the nineteenth century and was named for Prince von Salm-Dyck, an early expert on succulents. Dyckias are not technically succulents, as they do not store water in their leaves like true succulents. They are xerographic and survive long periods without water by going dormant. Their rosette of thick succulent leaves will eventually wilt, but recovery is rapid when watering is resumed.

The leaves vary from long and strappy to short and scalloped. All foliage is fairly rigid and may be smooth or serrated, solid color, variegated or spotted. Long stalks with multiple red, yellow, or orange flowers appear in spring. The wide range of varieties ensures that there is a specimen for every taste. 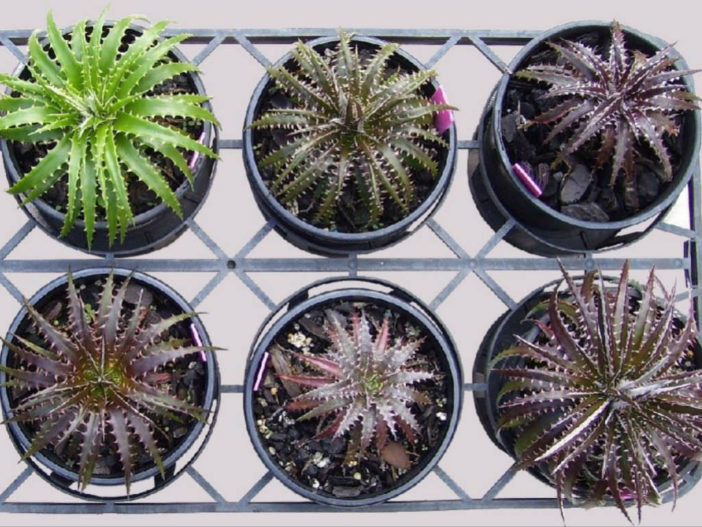 Most species survive in warm regions with heavy rainfall for half the year and arid conditions the rest of the time. This makes Dyckia care slightly challenging, as getting the right balance of moisture to keep the plant happy may be difficult. Dyckia growing conditions in their natural setting should be mimicked as much as possible.

It is not uncommon in their native region to find some forms growing on top of rocks near the water. Water and the cycle of the monsoon season are important features to Dyckia health. They are used to rather poor soil when they grow in the ground and should be planted in a good succulent mixture.

Dyckias need full sun and temperatures of up to 90 °F (32 °C) to thrive. Beware of exposing the plants to freezing temperatures for more than a brief time as they are not cold hardy. Temperatures below 40 °F (4 °C) seem to be the limit of Dyckia growing conditions.

Dyckias are exposed to harsh sun and arid conditions for most of the year. Then the rainy season appears, and the plants are half-drowned. Contrary to common sense, they seem to love this treatment, and plants are healthiest when the monsoon season is harsh and long.

While actively growing, Dyckias need regular water to produce happy plants. The soil should not be soggy but evenly moist at all times. Use a saucer under potted plants to keep the roots from sitting in water but allow for evaporation and consistent humidity. In winter, when growth is dormant, you may reduce the amount of water by half.

Fertilize from spring to fall with a half-strength liquid plant food. In the wild, the plants form pups or offsets, which result in new plants. The same is true in container-grown plants, and these can be divided away from the parent with ease.

The plants set seed readily when flowers are present, and these germinate quickly. However, they also freely hybridize, and the species resulting from the seed may not represent the parent.