Titanopsis calcarea, commonly known as Concrete Leaf Living Stone or Jewel Weed, is a curious and rather special, mat-forming succulent from South Africa. It has small rosettes of grayish fleshy foliage with small warty idioblasts covering the end of the flaring leaf surface. It slowly forms a clump and produces a yellow flower. It stays cute and little, making it the perfect lizard like addition for a container or rock garden and can even be grown as a houseplant.

This species comes from a very arid desert region and is a little more difficult than some others to grow, as it will not tolerate over-watering.

Like many of the South African desert plants, Concrete Leaf Living Stone tends to become dormant, or semi-dormant, during the height of summer in order to conserve moisture. It is often a mistake during mid summer to keep the plants wet, although they do require some water during this period.

Titanopsis are all fairly similar plants and seem to make most of their growth in the fall, with another shorter burst in the spring. Flowers may be produced in fall, spring or both. This charming little plant is worthy of a place in most collections. Concrete Leaf Living Stone is quite tolerant of temperatures down to 40 °F (5 °C) if kept fairly dry. Like most plants, it will benefit from good ventilation. 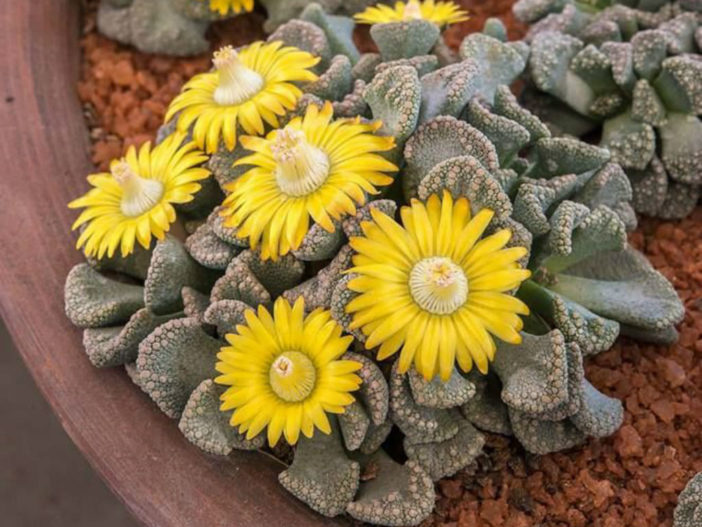 Concrete Leaf Living Stone should be kept in a bright, sunny situation at all times. It will grow well in a south-facing window.

Water this succulent well during the spring, allowing the compost to dry between waterings. During the summer, the semi-dormant Concrete Leaf Living Stone should be watered sparingly to avoid any chance of it rotting. During the early fall, it should be watered and allowed to dry several times, then in winter it should be kept fairly dry, only receiving enough water to prevent shrivelling. This plant will soon rot if kept wet at low temperatures.

As a native of very arid areas, Concrete Leaf Living Stone will benefit from a dry atmosphere. Feed this succulent regularly every 1 to 2 weeks during the spring, using a cactus food or one recommended for tomatoes at about half strength.

An extra gritty compost, containing about half grit, is recommended for this plant to reduce the chance of it being overwatered. Repot about every 2 years.

Concrete Leaf Living Stone grows quickly from seed or by division of larger clumps. Seeds are best sown in a warm, bright position in the early part of the year so that the plants are as large as possible before the onset of winter.