Echinocactus grusonii is a cactus, up to 3.3 feet (1 m) tall and about the same in diameter, with a single, slow-growing, globe-shaped stem that became barrel-shaped in maturity. The stem is pale green and heavily ribbed with numerous areoles sprouting radial, yellow spines. The flowers are yellow and up to 2 inches (5 cm) in diameter. They appear in summer around the crown of the plant, but only after 20 years or so.

Golden Barrel Cactus is fairly quick growing at first. Then the growth rate slows right down. So you can expect to wait about 10 years for the cactus to reach 10 inches (25 cm) in diameter. Like most cacti, they are drought tolerant and need very little care and attention to grow well. Not enough sunlight and overwatering are common mistakes. When handling, it is best to use gloves to protect your hands from the prickly spines.

When they are young and growing, it is best to repot these once a year. During spring in a slightly bigger container. Once they mature repot maybe every 2 to 3 years or when necessary.

Learn more at How to Grow and Care for a Golden Barrel Cactus (Echinocactus grusonii).

You can sow Golden Barrel Cactus seeds outdoors in warm climates, but sowing them indoors is easier and will result in a higher germination rate. Expect the seeds to germinate in one to two months.

Learn more at How to Grow Golden Barrel Cactus from Seed. 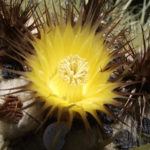