You are at:Home»Cultivation»Pests and Diseases»Why Do Christmas Cactus Leaves Turn Red?

Cultural stress is one common reason that Christmas Cactus develops red foliage, specifically if the plant is exposed to direct sun in summer or doesn't receive enough water. As a tropical forest species, this cactus performs best in partial shade during warm seasons. However it prefers full sunlight during midwinter. It requires slightly more water than many other cacti and should be irrigated whenever their soil feels dry 1 inch (2.5 cm) below the surface. If an established Christmas Cactus develops reddish foliage but otherwise appears healthy, evaluate its light exposure and move if necessary. Likewise, adjust the moisture level in the soil and don't allow it to dry out for too long between watering. 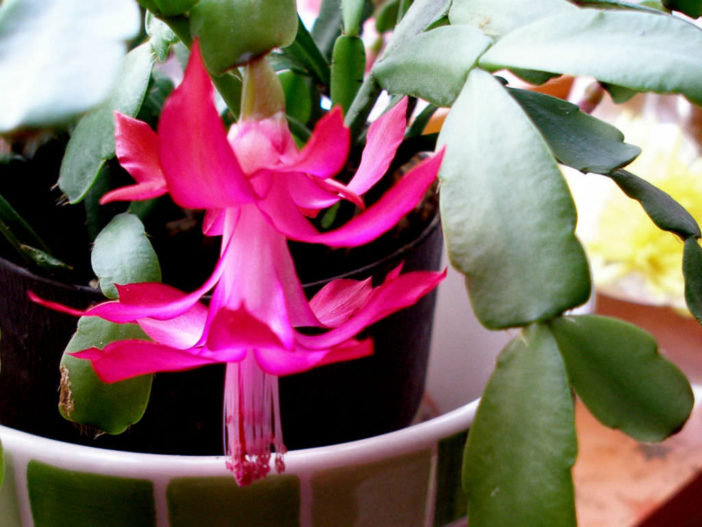 Overwatering causes damage to roots both by limiting their oxygen exposure and by weakening their tissue. Root rot is a common result of overwatering. It is characterized in Christmas Cactus by mushy tissue, wilting and pink or reddish discolorations on the leaves. Another tell-tale sign of root rot is a musty or sour smell in the soil. An affected plant should be repotted into fresh, unused potting soil and left unwatered for 2 to 3 weeks. Prune off the badly damaged foliage, and slowly return the plant to a normal water schedule by letting the soil dry out in the top 1 inch (2.5 cm) between waterings. Disinfect pruning blades before and after use by wiping with rubbing alcohol.

Christmas Cacti may develop an infestation of Cactus Cyst (Cactodera cacti) if potted in dirty soil or propagated from an infected plant. As a nematode, Cactus Cyst primarily affects the roots but can cause a host of symptoms in the foliage. Stunted growth, wilting and reddish discolorations are all common symptoms, but the most unmistakeable sign is seen on the roots in the form of tiny, pearl-like masses. Treatment of Cactus Cyst is difficult and seldom successful, so prevention is key. Pot the plant in fresh, sterilized soil inside an unused pot and keep it off the ground to limit contact with infested soil. If an infestation occurs, discard the plant to keep the pathogen from spreading.

Red or purple-tinged foliage and wilting are two common symptoms of a magnesium deficiency, which is a common ailment in Christmas Cacti. It occurs mainly during the winter months when feeding and watering are restricted and cold temperatures slow the plant's nutrient uptake. The cactus does best in winter at temperatures around 55 to 65 °F (13 to 18 °C). Correcting a magnesium deficiency can be done with Epsom salts. It normally helps to provide a supplemental feeding of 1 teaspoon of Epsom salts dissolved in one gallon (3.8 l) of water. Pour the mixture into a spray bottle and spritz the tops and undersides of the foliage. Reapply the mixture every two weeks until the foliage returns to its original color.