Regarded as the largest succulent plant in the world, the Baobab tree (Adansonia digitata) is steeped in a wealth of mystique, legend and superstition wherever it occurs in Africa. It is a tree that can provide, food, water, shelter and relief from sickness.

Often referred to as "grotesque" by some authors, the main stem of larger Baobab trees may reach enormous proportions of up to 92 feet (28 m) in girth. Although baobab trees seldom exceed a height of 82 feet (25 m). The massive, usually squat cylindrical trunk gives rise to thick tapering branches resembling a root-system, which is why it has often been referred to as the upside-down tree.

There is a tale which tells of how God planted them upside-down. Many traditional Africans believe that the Baobab actually grows upside-down.

The Baobab tree is found in areas of South Africa, Botswana, Namibia, Mozambique and other tropical African countries where suitable habitat occurs. It is restricted to hot, dry woodland on stoney, well drained soils, in frost-free areas that receive low rainfall. 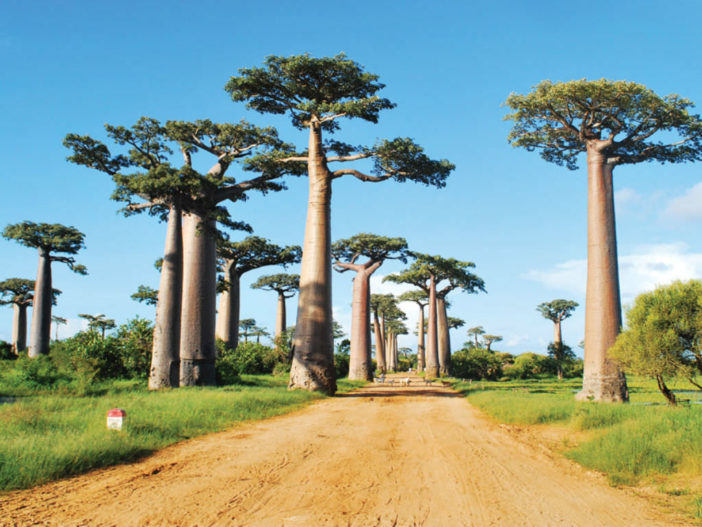 Large baobab trees with hollow stems have been used by people for centuries for various purposes including houses, prisons, pubs, storage barns, and even as bus stops. Rainwater often collects in the clefts of the large branches, and travelers and local people often use this valuable source of water. African honey bees often utilize hollows in the Baobab to make their hives.

The leaves are said to be rich in vitamin C, sugars, potassium tartrate, and calcium. They are cooked fresh as a vegetable or dried and crushed for later use by local people. The sprout of a young tree can be eaten like asparagus. The root of very young trees is also reputed to be edible. The seeds are also edible and can also be roasted for use as a coffee substitute.

The bark on the lower part of the trunk often bears scars caused by local people who harvest and pound it to retrieve the strong fibre. The fibrous bark is used to make various useful items such as mats and ropes, fishing nets, fishing lines, sacks as well as clothing.

Baobabs are quite easily grown from seed although they are seldom available in nurseries. Seed can be collected from dry fruits by cracking the fruit open and washing away the dry, powdery coating. The dark brown to black, kidney-shaped seeds should be soaked in a container of hot water and allowed to cool, they may then be sown after soaking for 24 hrs. Seeds are best sown in spring and summer in a well-drained seedling mixture containing one-third sand.

Cover the seed with sand to a depth of 0.14 to 0.24 inch (4 to 6 mm), place the trays in a warm semi-shaded position and water regularly until the seeds have all germinated. Germination may take from 2 to 6 weeks. Seedlings should be carefully monitored for damping off fungus, which can be treated with a fungicidal drench.

Transplant the seedlings once they are 2 inches (5 cm)  tall into individual containers, preferably in a sandy soil with some well-rotted compost and bone meal. Baobabs grow reasonably quickly when they are young.

They will make a handsome addition to a large garden, estate, or large parkland providing the soil is not waterlogged. Baobabs cannot tolerate even mild frost.

When they are young, Baobabs do not resemble their adult counterparts, the stems are thin and inconspicuous, and their leaves are simple and not divided into the 5 to 7 lobes of the adult trees.
Saplings can be effectively grown in containers or tubs for many years before becoming too large and requiring to be planted into the ground. In this manner one can move them out of the cold into a warm position in a glasshouse or indoors behind a sunny window to prevent frost damage.