You are at:Home»Cultivation»Propagation»How to Propagate a Kiwi Aeonium

Aeonium haworthii 'Dream Color', commonly known as Kiwi Aeonium, adds year-round color and texture to gardens with its colorful foliage, which has shades of chartreuse, cream, and red. It grows USDA plant hardiness zones 9 to 11, where it grows equally well in containers and low-water landscaping beds. Kiwi Aeonium propagates best by vegetative methods, but they will also grow from seed. Seed-grown plants sometimes differ in appearance because they are cultivars.

Propagating Kiwi Aeonium from seed is a gamble because the resulting seedlings may not closely resemble the parent plant. The seeds are highly viable and will germinate freely if sown while still fresh. Sow the seeds in a nursery flat filled with a neutral, fast-draining medium. Mix the minuscule, dustlike seed with a pinch of fine sand to make sowing easier. Sprinkle the sand and seed mixture across the surface of the medium and do not cover it with soil. Expose the seeds to temperatures around 70 degrees Fahrenheit (21 degrees Celsius), keep them moderately moist and watch for the first seedlings in five to 10 days. Thin out the seedlings, so only one remains in each 1 square inch (6.5 square cm) area, then transplant them into small pots once they produce a mature set of leaves.

Stem cutting propagation is the simplest and most effective means of propagating Kiwi Aeonium. The cuttings will root any time of year, although those taken during the spring and summer months root fastest and are least likely to develop rot. Take a 3-6-inch (7.6-15 cm) tip cutting and place it in a warm, dry spot out of the direct sun for two to five days, or until the severed end calluses over. Pinch off the lowest sets of leaves and pot the cutting in a pot filled with porous, fast-draining medium. Keep it in a bright spot, water it lightly, and watch for renewed growth in around four weeks. 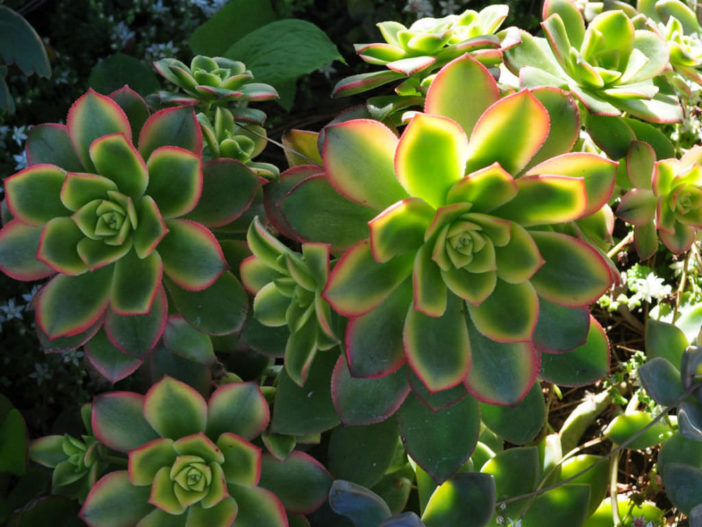 Older, well-established Kiwi Aeonium produce an abundance of offshoots, or pups, which can be divided to grow new plants. The offshoots emerge around the base of the plant and are connected to the main stem. It is best to wait until the offshoot has developed a root system before cutting it from the main plant and potting it, but it isn't necessary to wait. Unrooted offshoots can be severed, allowed to callus over, and potted similarly as cuttings. The offshoots perform best when potted in spring or summer, but they will root any time of year if kept under warm, bright conditions.

No matter how you propagate Kiwi Aeonium, the resulting plants must be allowed to produce a viable root system before planting them into a garden bed. Grow the immature Kiwi Aeonium in a sheltered spot with morning shade and afternoon sun until they produce several sets of leaves. Slowly acclimate them to the full, all-day sun over a week. Water deeply but infrequently so the soil has a chance to dry out slightly between waterings. Move the Kiwi Aeonium into a sunny bed or permanent planter in fall, just as they enter dormancy. Water them occasionally during their first summer, but only if no rain has fallen for longer than three weeks.