Weird, peculiar, wonderful, strange, bizarre, fascinating, and of course, unique, are the kind of words that are used to describe the Welwitschia. It is one of the few things on Earth that can truly claim to be one of a kind. There really is nothing like it.

Welwitschia mirabilis is the only member in the family Welwitschiaceae. It was named after Friedrich Welwitsch, an Austrian naturalist who explored Africa in the 1800's. Welwitschia is the most incredible plant that he encountered. It is native to a strip of land about 50 miles wide and over 500 miles in length along the coast of the Namib Desert.

In habitat, these plants get less than 1 inch (2.5 cm) of rainfall per year. But because of a cold, coastal ocean current, this area also gets a regular fog, adding almost another 2 inches (5 cm) of precipitation. As a result, these plants in nature are slow growing and can live to be 2000 years old! They are coning plants with male and female cones on separate plants. They produce only two true leaves in their lifetime and those leaves continually grow from the base, all the while, dying back and drying off at the tips.

Welwitschia is not a true succulent, yet it is the succulent growers and enthusiasts that are most interested in it. It is caudiciform, yet is not often included in accounts of these plants as it belongs in the "wrong" family! 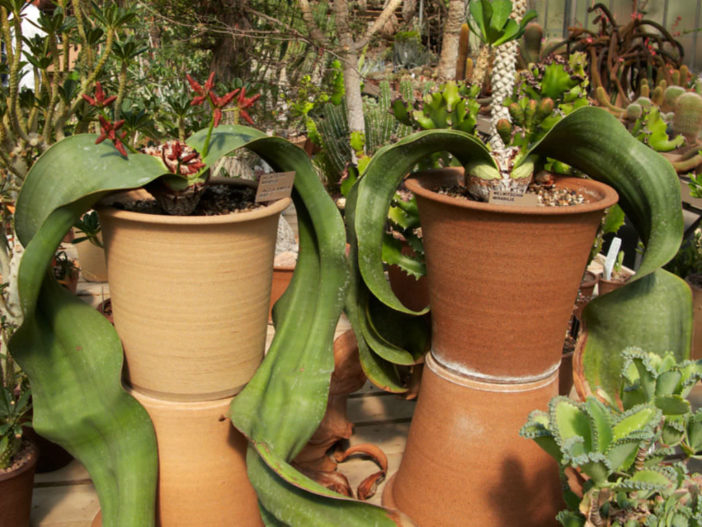 When growing Welwitschia there are a few important factors to take into consideration: the long taproot, its dependence on extra moisture and the soil used. Plants from arid regions are often lost to fungal infection caused by soil with a high organic content. It is safer to use a sandy mixture, water more frequently and give supplementary feedings. It is also recommended to use sterilized soil. Older plants tend to accumulate organic debris around themselves which enriches the soil and acts as a mulch, helping to retain water in the upper layers of the sand for longer.

Seed should be sown during the warmer months, spring or summer. In habitat the seeds are dispersed in spring, but have to wait for rain to fall before they germinate. It is best to sow seed into a large, deep (at least 12 inches (30 cm), preferably more) container or into an open bed where the plant is intended to remain, because the taproot grows quite fast in the initial stages. If using a container, remember to place a layer of gravel or rocks at the bottom to ensure good drainage. The soil must be sandy and well-drained, e.g. 2 parts sand : 1 part loam : 1 part compost (leaf mould) with ample bonemeal, well mixed and sterilized. Moisten the soil thoroughly before sowing. If using a container, sow two or three seeds per container, near the centre. If more than one germinates, it can be transplanted in its first month, or left to form interesting graft complexes with its sibling. If you have an open bed, scatter them evenly over the surface. Place the seed on top of the soil and just cover it with a layer of sand. Water well and keep in a warm sunny situation. It is important to add a mild fungicide, like Captan, to the water during the first year as it will prevent fungal attack. Keep the soil moist until the seeds have germinated.

The placement of the ungerminated and germinating seedlings is also important. Choose a well-aerated, warm atmosphere, preferably in filtered sunlight. The plants are very sensitive to sudden changes in light intensity. Never move a plant from a shady situation to full sun, the leaves will burn and the plant may never recover and die. So when moving your plant, make sure that you gradually harden it off to brighter light.

At first glance it would appear that Welwitschia would be almost impossible to grow, but this is only partly true. Welwitschias can be grown easily, even as pot plants and even on window sills and verandas in cooler climates. Once established, the plant will grow steadily and is relatively disease free. The most crucial stage is during its first eight months after germination when it is prone to fungal attack. Also, as it is not a true succulent, it should not be treated as one. It is dependent on additional water from its roots and if grown in a pot, care should be taken that the soil does not dry out completely.

3.4Kshares
Previous ArticleThe Spectacular World of Succulents
Next Article How to Grow and Care for Xerosicyos
error:
3.4Kshares
3.4Kshares