Pachycereus is a small genus of about 10 species of cacti and includes some of the largest specimens in the entire Cactaceae family. The single largest cactus ever recorded was a Pachycereus, more specifically, a colossal Pachycereus pringlei, commonly known as Cardon Cactus, which astoundingly grew over 60 feet tall. Massive though some Pachycereus may be, many of these cacti grow to a much more manageable size. They are often cultivated in the American Southwest and Mexico, to which they are indigenous.

The most common of these varieties are Pachycereus pringlei itself and Pachycereus marginatus, both of which can be shaped as a sort of fence or a feature in your landscape. These cacti have a columnar growth habit, with ribs on the stems and lots of treelike branches. Superficially, P. pringlei resembles the more common Saguaro and is often mistaken for it. Like most other plants that can grow to staggering size, Pachycereus cacti grow extraordinarily slowly throughout hundreds of years. They require virtually zero assistance on your end, provided they are raised in a desert environment. These magnificent specimens were once much more common, but many have been cleared or cut down. Nonetheless, entire forests of Pachycereus still exist in Mexico, and this stark and beautiful cactus is a delight to see in person. Their spiny, alien, colossal shapes are a great example of the twisted beauty of which Cactaceae plants are capable. 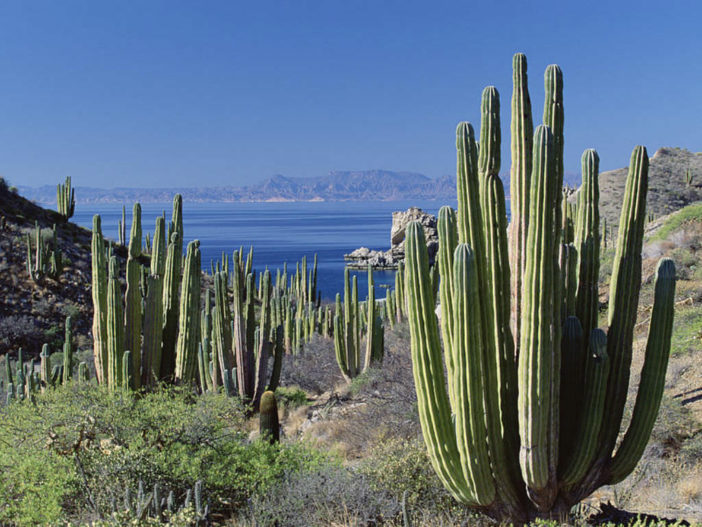 Light: As much full sun as possible.
Water: Overwatering Pachycereus is a surefire way to damage them. Arid, hot conditions, just like the Mexican desert, are ideal. You really should not have to water them at all.
Temperature: Their conditions should be as desertlike as possible, which means lots of very high temperatures.
Soil: Pachycereus pringlei has developed the amazing ability to grow on rocks without soil present. It accomplishes this through a symbiotic relationship with bacteria in its roots, which glean nutrients from the rock itself and pass them on to the plant. If you cultivate them in containers, potting soil is fine, but be aware that it may not even be necessary.
Fertilizer: Also, not necessary, although many cacti do benefit from feeding with a cactus fertilizer, and fertilizing them certainly will not hurt.

Like most cacti and succulents, these plants propagate by cuttings. Sever a branch and replant in well-drained soil. Make sure to stand the cactus up in an empty container to let its ends heal off before you replant it. This will keep its stems shaped right, and cacti with dried ends form roots more easily after planting.

Inapplicable to most scenarios in which Pachycereus would be grown. If you choose to cultivate a small specimen of Pachycereus pringlei in a container, repotting it can be helpful. Repot it as you would any other cactus, remove it from the pot, cut away any dead material from the roots, and replant. Watch out for the plant's spines. They can really ruin your day.

These extraordinarily low-maintenance cacti can basically grow untouched for decades, so there is not a lot you need to worry about. It is very important that they receive adequate sun and heat, and be careful around their spines. If grown in containers, make sure that they're being repotted and that their soil isn't too moist. Other than that, these plants are about as simple and hands-off as it gets.