Carpobrotus is a genus of ground-creeping plants with succulent leaves and large daisy-like flowers. The name refers to the edible fruits. It comes from the Ancient Greek "karpos," meaning "fruit" and "brota," meaning "edible." Plants in the genus are commonly known as Pigface, Ice Plant, or Hottentot Plant.

The genus includes about 20 accepted species. Most are South African endemics, but there are at least 4 Australian species and one South American.

Various Carpobrotus species are invasive introduced species in suitable climates throughout the world. The harm they do is variable, and sometimes hotly debated, when balanced against their value as firebreaks and as food for wildlife.

Carpobrotus are perennial plants in their chosen zones but also thrive as annual plants in colder areas. The best temperature range for these succulents is between 40 and 100 °F (4  and 38 °C). However, some protection from the sun's scorching rays may be required in the higher temperature ranges.

Growing Carpobrotus in planters prevent them from spreading in those areas where that is a concern. Freezing temperatures may cause the plant to die back, but it will resprout in spring in a temperate area. 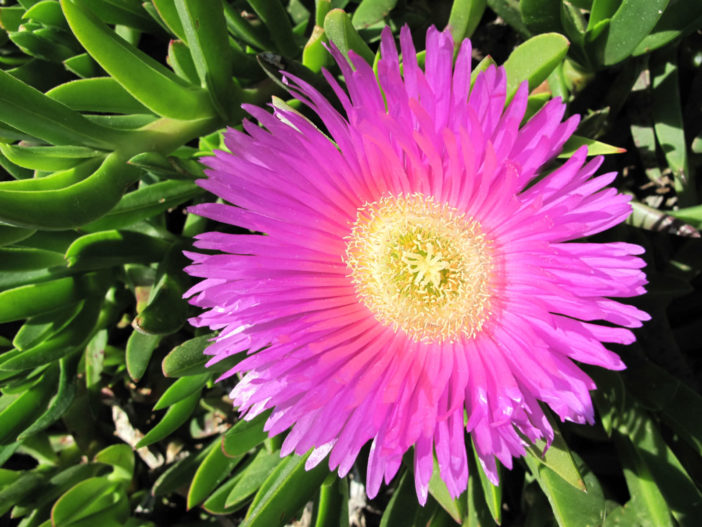 Carpobrotus plants are notoriously unfussy. As long as their soil drains well, the soil is allowed to dry out between watering, and the plant receives pinching or pruning to keep it in shape, there is little more to be done.

The only serious threats to the plant's health are spittlebugs and some root rots and stem rots. You can avoid the rot by minimizing overhead watering during periods in which the plant will not dry off before nightfall. The bugs will remove themselves if you spray with horticultural soap.

Growing Carpobrotus in containers is ideal, and you can overwinter them in temperate regions. Just bring the pot in and water it deeply. Cut back the plant and let it dry out and languish for the winter in a warm, sunny location. In spring, resume regular watering and move the plant to a full light situation where it has some protection from burning rays. Gradually reintroduce the plant to temperatures outdoors until it can tolerate a full day outside.

Stem cutting is the fastest way to propagate these fast-growing plants. Seeds are also available, and you may start them indoors at least six weeks before the date of the last frost.