Viola is the largest genus in the Violet family, containing between 525 and 600 annual or perennial plants and a few small shrubs. They are widely distributed over both the Northern and Southern temperate zones. There are also a handful of shrubby species in the Andes, Sandwich Island, and in Eastern Europe.

The genus was first formally described by Carl Linnaeus in 1753 with 19 species. The type species of the genus is Viola odorata. The generic name "Viola" derives from the Ancient Greek "ion," meaning "violet."

Because Violas hybridize freely, identification of the species is often difficult. Flowers are variable in color but not red, usually grow solitary on a stalk. They have five petals, four arranged in unlike pairs, the fifth with a spur. In stemmed Violas, leaves may grow on the same stem as the flower, while in stemless Violas, they grow on separate stems. The best-known Violas usually have heart-shaped leaves, but the leaves of other species may have different shapes.

All species bloom early in the spring, but some cultivars or hybrids bloom later. Many species have two types of flowers. One type is showy and appears in the spring but often does not produce seeds in some species. The fertile, less conspicuous flowers appear in the early summer and are completely closed and self-fertilizing.

The species from the high Andes of South America are known as Rosulate Violas or Andinium Violas. They are Violas in which the leaves form a tight rosette, rather like Sempervivum or some of the Saxifrages. There are two main groups. The species that belong to Cotyledon Group are hard leaved perennial plants that possibly live about 15 years. The species that belong to Volcanica Group are soft-leaved annuals or short-lived perennials. Flowers appear at the leaf level in rings around the outside of the rosette. 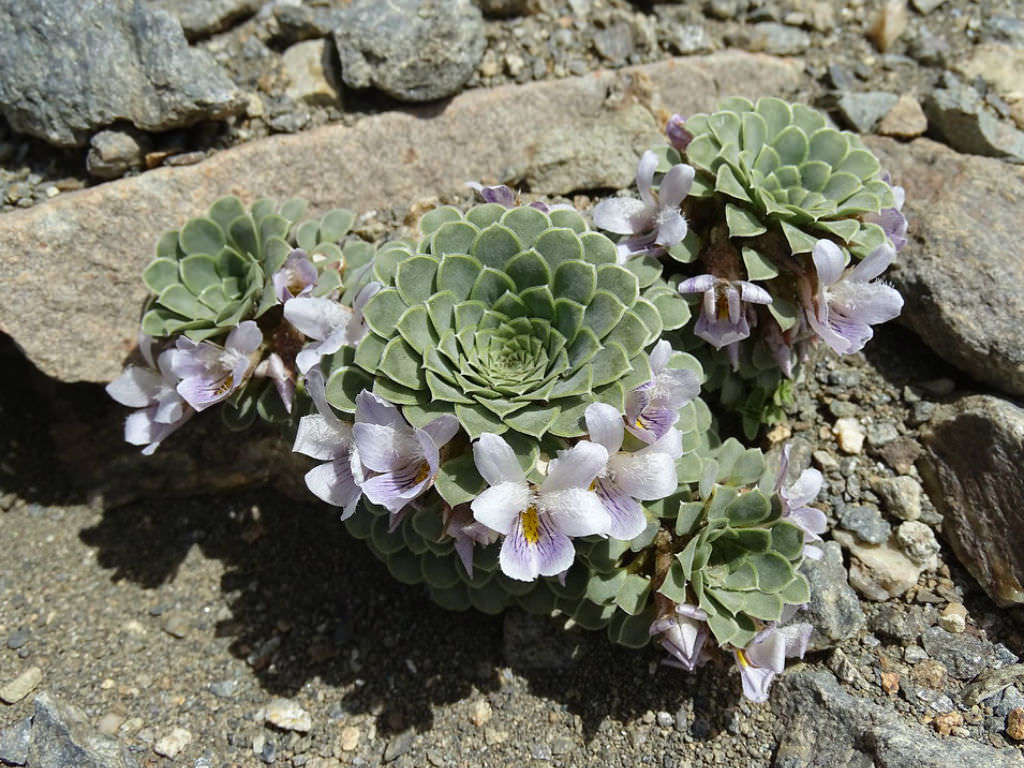 Violas wildly grow in damp woods or meadows. The small, hardy species grow well in the rock garden, and others require sharp drainage or a humus-rich soil mix with high moisture retention. Yet others need alpine house protection from hard frost and wet conditions in winter. Most species like partial shade and moist but well-draining soil.

Rosulate Violas are mainly found in Chile and Argentina and grow in relatively bare loose soils, which are often volcanic in origin. Like many plants in such countries, they have a long taproot to ensure access to water.

Rosulate Violas have a reputation for being difficult to keep alive, but some species can be grown by experienced growers. Magnificent specimens of Viola dasyphylla and Viola cotyledon appear regularly on the show bench.

The main problem with Rosulate Violas is etiolation, caused by a lack of light, which results in elongation of the compact rosettes. Cold conditions, soil that contains adequate amounts of nutrients, and as much light as possible, are essential. It is known that in any bunch of seedlings, some of them will quickly etiolate, while others may not. So there is some scope in selecting Rosulate Violas more likely to grow satisfactorily in cultivation.

How to Propagate Rosulate Violas

Rosulate Violas are grown only from seed and with some patience.

Violas are nontoxic for humans and pets. Both the flowers and leaves are edible fresh, cooked, or dried.